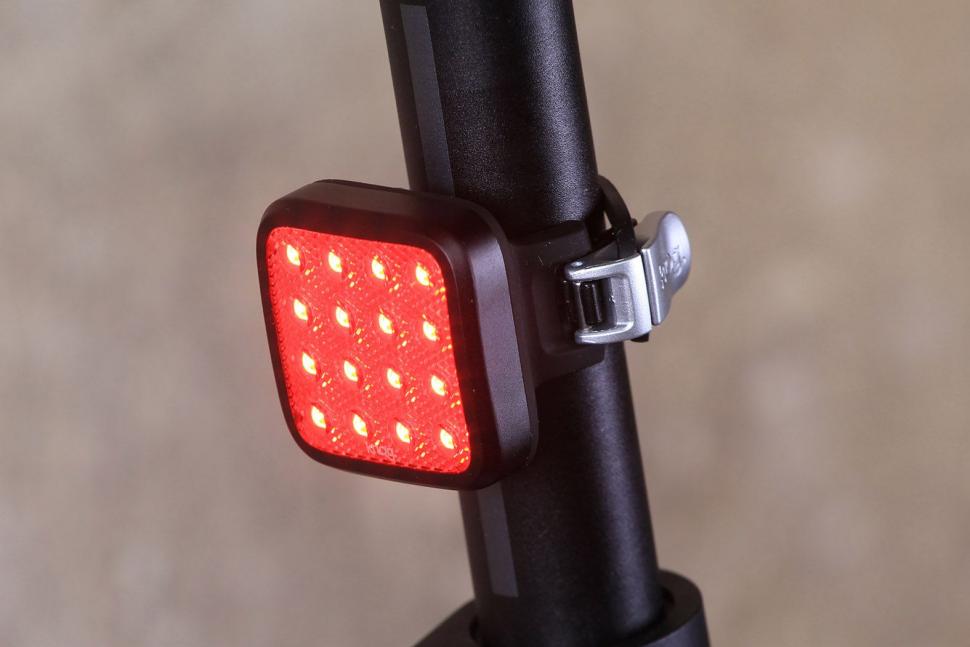 8
10
Very good back light that pumps out enough light to make you visible without blinding a rider behind you
Weight:
37g
Contact:
www.silverfish-uk.com
How we test

The Knog Blinder Mob Kid Grid Rear Light is a well designed and strong performing rear light. It pumps out enough light to keep you visible and has a really good variety of placement options while also having a good battery life, so it can just be left for weeks until it needs charging.

As the nights roll in and the fair weather riders begin to retreat, it is increasingly necessary to get a decent set of lights to keep you visible to other road users. Knog has become one of the best known names in the industry in the past few years, bringing its Aussie style to bike lighting. So how does the Blinder Mob Kid Grid Rear Light fare?

The light pumps out 44 lumens to keep you well lit without blinding the person riding/driving behind you. In recent years I have come to realise that being stuck behind somebody pumping out 100 lumens from their seatpost is one of my real pet peeves. Sure you can be seen mate, but the only other things I can see are blue dots. I'd say 44 lumens is about the right balance between good visibility and annoying the person behind you.

The light has five different sequences – steady high, steady low, strobe, fancy flash, eco flash. Using these different sequences impacts battery life, as you'd imagine. Knog claims these run times: steady high 2.5 hrs, steady low 5.6 hrs, strobe 4.5 hrs, fancy flash 6.6 hrs, eco flash 59 hrs. These seem about right, having done the 'light in a shoebox next to my desk in different modes' test to be sure. I used the eco flash for the majority of the review and only needed to charge it once in three weeks, which is impressive. I just left it on the seatpost until the LED indicator showed me that it needed charging and then did so.

Charging takes between 4-5 hours from the laptop, which is done through the USB attachment – which is part of the light. It means you need to make sure there is no water or dirt on it when plugging in, but given that it is pressed against the seatpost, there won't be too much to get in. You can also see how charged the light is through the LED battery indicator, which also lets you know when the light needs charging. It is worth noting that despite the USB being built in, the light itself is totally waterproof and dustproof and, having used it in biblical weather, I can attest to that.

> Read our guide to the best reflective clothing and accessories

One thing I really like about this light is the way it attaches to the seatpost. It comes with three different strap sizes that connect it directly to the bike rather than via a mount, making it considerably more versatile than some. My girlfriend's bike has a bolt in an awkward point on the seatpost, usually making it difficult to put a light on it, but this went on without an issue. Operation is also simple thanks to the positioning of the single button on the right hand side of the light. Holding it down turns it off/on and a short press changes the sequence.

The light weighs 37g according to the road.cc Scales of Truth, 2g more than the claimed 35g. This is about right and hardly likely to weigh you down.

An RRP of £37.99 for something this well made that works well is about right, I'd say. You can certainly get cheaper lights, but here you're getting very good quality and really good output.

Overall, I was really impressed with this light. It brings together simplicity, a nice attachment system and a good amount of light emitted. Battery life is also great, especially when used on eco flash, and charging is simple thanks to the built-in USB.

An urban rear light to make sure you are seen by other road users.

Knog says: 'An attention seeking, limelight snatching party animal, perfect for those darkened inner city streets and urban commutes. Blasting out 44 [lumens] at the rear this bright bike light ensures that you'll be lit up like a beacon to all other road users up to 1.2 Km's away."

It manages to do what Knog claims, without blinding the person behind you in the process.

Well made and solid construction.

Really easy to use through the single button on the side of the unit.

I really liked the clamping system as it allows for use of a variety of seatposts.

Used in fairly biblical weather without any issues.

Dependent on sequence used, but when used on eco (as I tended to) it could be left for weeks without needing charging.

Made me considerably more visible on the road, which is all I needed it to.

Well made, waterproof and dustproof, so is likely to last for a long time.

Some are heavier, some are lighter, this sits about where I expected.

About right for what it is.

I was really impressed with the light. It wasn't so bright as to blind the person behind me but still gave me a good level of visibility to other road users.

The range of attachment options was a real plus.

It does exactly what I need, lighting me up nicely, not blinding the person behind, and has impressive enough battery life that I could leave it for weeks between charges.