8
10
Good rear light with lasers that add visibility if not necessarily virtual lanes
Weight:
93g
Contact:
www.niterider.com
How we test

The NiteRider Sentinel is a powerful USB-chargeable rear light that provides good visibility, with the added bonus of lasers that create a virtual cycle lane.

The first and most important aspect of any rear light is the visibility that it provides to other road users. In this regard the Sentinel excels, pumping out 30 lumens from a small and relatively lightweight rear light. 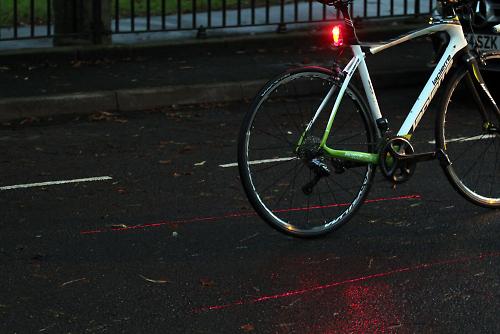 The light has four different settings, with two steady beams and two flashing options. I found that each worked effectively and I had a couple of cyclists behind me comment on how bright the light was. The light settings and the laser (which has a solid or flashing setting) are set by two buttons on the top of the light. I did find the buttons a bit awkward, especially when trying to use them with full finger gloves, mainly because they are right next to one another.

The standout feature of the light is the lasers that create a 'virtual lane'. Initially I was sceptical about how effective these could be, but they do provide good additional visibility.

I'm not so sure about the 'virtual lane' though. If the idea is to create a safe passing distance, then it would not be a wide enough lane for me to feel safe as the lasers project lines on the road that are only around 1.5 feet either side of the bike. However, it does make you seem bigger on the road and drivers did seem to give me a wider berth than usual. 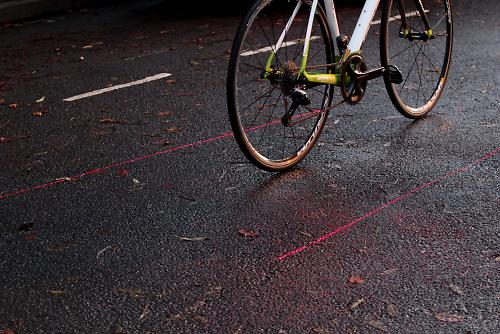 The width is naturally dependent on the height at which you have the light on your seat post, which attaches through a hand tightened clamp. This worked effectively and the rubber inner surface of the bracket kept any surfaces from getting scratched. Surprisingly, the light works just as effectively when attached to a saddlebag: the lasers manage to maintain stability thanks to a strong clip.

Charging is a breeze and uses a micro USB cable that powers from 0 to 100% in around two hours. The battery lasts for varying times based on how you are using it. The settings that I generally used (flashing lasers and flashing lights) meant that it lasted for around 10 hours, which meant charging it once every couple of weeks for my commute into work.

In terms of weight (73g is claimed) the road.cc scales of truth came in at 93g, so it is not overly heavily, but isn't the lightest rear light on the market.

At £44 it is expensive for a rear light, but it does have impressive illumination and the lasers certainly add an extra dimension of visibility.

The light is aimed at safety conscious cyclists in urban environments. Given that it does provide a considerable visibility on the road, I think that it does work in this regard.

Sits strongly in the mount and construction is of good quality. One issue is the proximity of the buttons, making it slightly awkward when turning lights and lasers on and off.

Easily to attach to the bike, the lasers are simple to use, but again, the button placement does make it slightly awkward to operate.

Very easy to put on the bike using either the bracket or the hook to attach to saddlebag.

Stood up well to elements, used it in cold and wet conditions without any concerns.

Good battery life and a flashing pattern that can be changed in order to prolong battery life.

Very bright light that works well, the lasers may not necessarily create a virtual lane, but they certainly increase visibility.

No worries with durability, seems like it would outlast cheaper options.

More or less middle of the pack.

Expensive, but with added brightness and lasers the additional money doesn't seem too excessive.

Performed well, I certainly noticed cars making extra room for me on the road.

The brightness was a really strong point and I also liked the additional lasers, they certainly added an element of visibility to the lights.

The buttons at the top are too close together, making it hard to operate with either thick gloves or freezing hands after a long cold ride.

A strongly-performing backlight with the innovative element of lasers that may not create a perfect 'virtual lane' but certainly add an extra level of visibility.