Need to carry panniers but don't have frame mounts? The Blackburn Expedition 1 Disc is a good solution that will fit round disc brakes too.

The Blackburn Expedition 1 Disc rack is designed to fit bikes that don't have dedicated mounts, using the special rear quick-release skewer to take the weight and P-clamps (supplied) to secure the top mounts. At the lower mounts there is space to fit around disc brakes, whether they're mounted inside or outside the rear triangle. This does mean that it is wider than most racks at the bottom, and hence your panniers will be an inch or so further out, but I didn't have any problems with this in use. 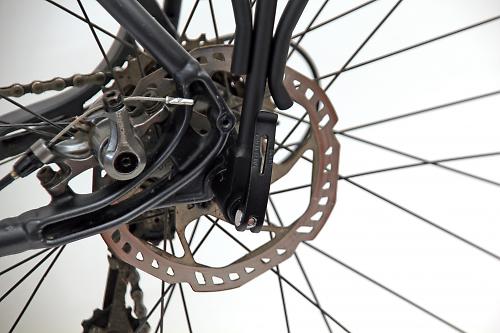 I fitted it to my do-it-all bike, a Boardman cyclocrosser. It has rack mounts so I normally use a conventional rack for commuting and touring. Some racier 'cross bikes (not to mention road bikes) don't have rack mounts so this offers a solution for these if you want to use them for commuting or touring. Another option would be the Thule Pack 'n' Pedal. You can also get racks which fix to the seatpost but these tend to have lower load limits.

In theory you could probably attach the lower end to the frame mounts if you had them, but it isn't supplied with screws long enough to do that, so I used the extra-long QR that is supplied to fix it in place. The P-clamps are supplied in a couple of different sizes to suit different seat-stay sizes and covered in plastic to avoid damaging the paint. I didn't use them as it was easier to fix the extenders straight to the frame. If I didn't have seat-stay braze-ons, I'd probably still try and avoid using the P-clamps as I think they're rather inelegant. You can get seat-post clamps with integrated rack bosses, like the Rack-Lock from Salsa, for a neater setup.

Installation was as quick and straightforward as any other rack I've used before - taking no more than 10 minutes. Once on it was easy to adjust the clips on my usual panniers to suit the position of the legs of the rack. 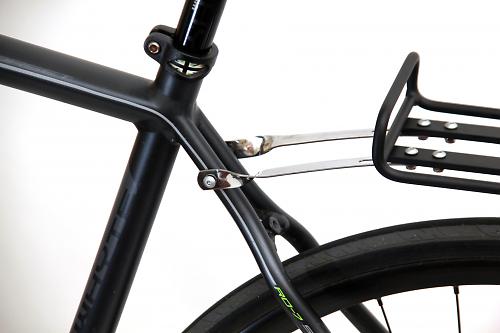 Unusually, the Expedition 1 Disc is made of three different sizes of aluminium tubing. The central vertical leg, which takes the most load, is thickest at 12mm, and the other tubes are a little thinner to save weight. The three vertical members are fairly closely spaced, so it works best with a pannier with a fair amount of inherent stiffness (i.e. not something like this).

We weighed it at 800g with a typical set of fittings, so it's a litle heavier than some other racks. It also has a lower payload limit at 18kg, compared to a more typical 25kg for most similar racks. I've rarely wanted to carry much more than around 15kg even when touring so this wouldn't necessarily be a problem for me but it's something to consider.

Once installed the rack stayed firmly in place, showing no inclination to shake the quick release loose or any other similar problems even when used on a bumpy tow-path. Similarly I had no issues with pannier attachment: a variety of panniers all stayed where they should while I was riding. When more heavily-loaded I found that it remained stable and gave no problems with the handling of the bike either. 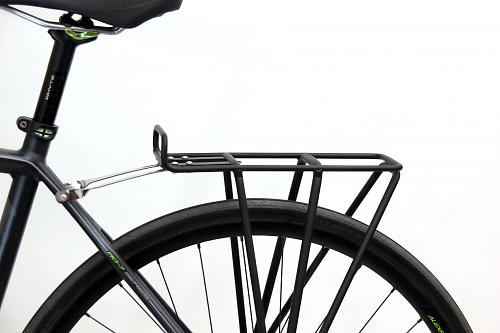 For me the only shortcomings were ones linked to the fact of using the rear quick-release skewer to hold the rack in place. Most significantly it means that removing the rear wheel is rather more fiddly - an issue if you have a puncture, obviously, but also for cleaning the bike. Initially I'd forget that it was connected to the rack and open the QR and try and remove the wheel, only to find that something was stopping me. You need to pull the QR all the way out to one side to detach the wheel from the rack and the dropouts, leaving the rack suspended only from the upper extensions.

A further issue is that if you have anything additional attached via the rear skewer, it will probably not be compatible. We have a dog trailer which is also fixed to the skewer, and the extra-long skewer included with the rack is not long enough to allow both the rack and the trailer to be installed. This is probably not relevant for most users, in reality, but it would be a problem for me.

A final consequence is that you cannot remove the rack if you don't have your standard quick release skewer with you. The special skewer used to fix the rack is much too long to use without the rack in place, as the rack has built-in spacers to fit around a disc brake calliper. When we're touring I sometimes remove the rack if we're just out for a big ride without luggage. All this would mean is that I'd need to remember to take the standard quick release, so not a big deal.

I've also used the Thule rack mentioned above when I was testing a bike without rack mounts, so how do the two compare? Well, the Expedition 1 Disc is probably better in most respects: it's a lot cheaper, it's lighter and I found it stays in place better. I had some issues with the Thule moving around, probably because I was reluctant to really tighten the straps as hard as I could in case I crushed the seat-stays. Load capacity is the same if mounted on the sides (although Thule says its rack can take 25kg if mounted on the top and hence pushing directly downwards on the rack). The Thule doesn't interfere with the rear axle, however, so this is a big plus point in its favour when compared to the Blackburn.

Blackburn say that the EX1 Disc will fit bikes with 700c and 26-inch wheels, although I've read elsewhere that it is not compatible with a 29er mountain bike setup.

* Fits both wide and narrow tire

Good quality construction and comes with all the bits you need to fit it to just about any bike.

Stable and fuss-free, as long as you don't need to remove the rear-wheel.

No issues during testing. Blackburn offer a lifetime warranty on this and most of their other products, so it should last.

Significantly lighter than the Thule system, but a little heavier than some other aluminium racks. Probably not something you'd worry that much about, though.

At £45 it's a bit more than some, but you can easily find it online for around £30 which I think is a very fair price given that it includes the extra bits needed to mount to bikes without braze-ons.

It's a neat system for use on bikes without dedicated rack-mounts and stays in place better than the Thule alternative in my experience. Quick and easy to install.

Removing the rear wheel is a pain. Can't use it together with our dog trailer.

Would you consider buying the product? Probably not as my bike has rack mounts so there are better options for me. 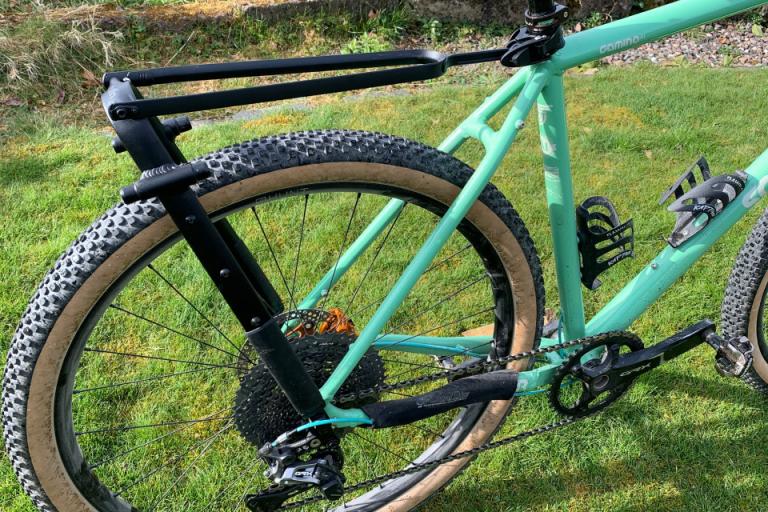 A highly-adaptable, solid and silent way to carry gear on multiple bikes 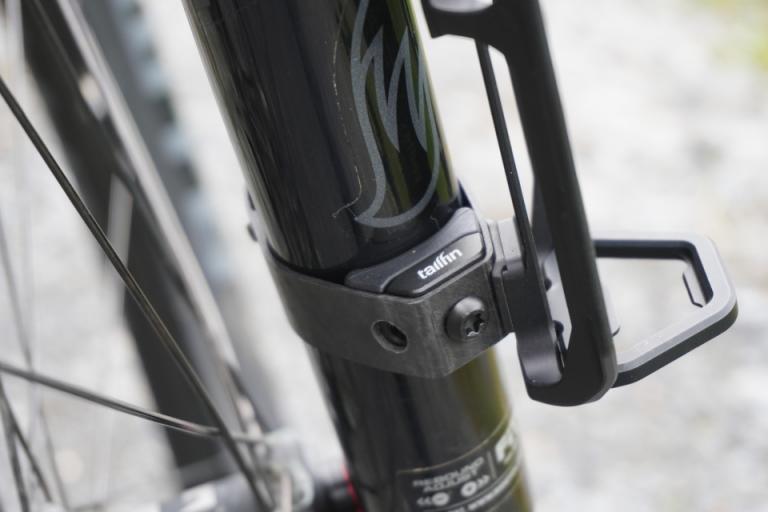 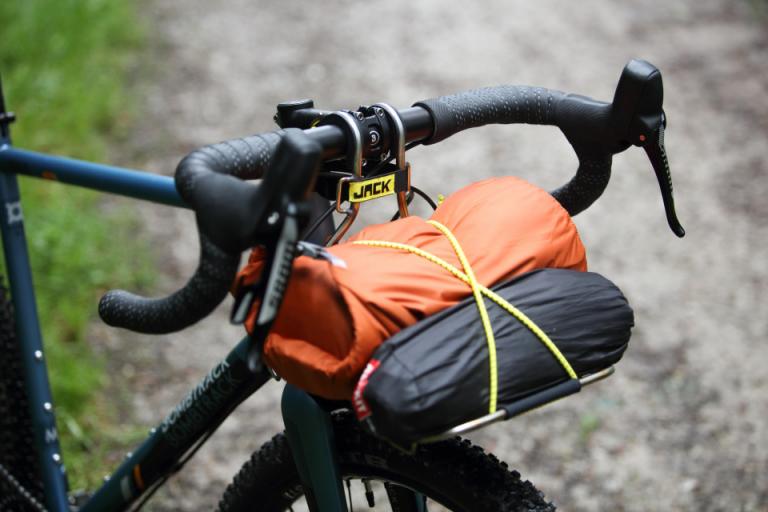 Brilliant front rack that will work with almost any bike