8
10
A very good bike bordering on the exceptional, the SL version might just cross that border
Weight:
6,700g
Contact:
www.merida.com
How we test

Merida is best known for its mountain bikes, especially thanks to the Multivan Merida cross-country team which boasts the all-conquering Gunn-Rita Dahle Flesja on its roster. But the Taiwanese brand makes a huge range of bikes right across the spectrum: hybrids, cyclo-cross, triathlon, fitness… and we’ve been getting the miles in aboard their top level road race bike, the all-carbon Scultura Evo Team.

The Scultura – which translates as ‘Sculpture’, though we think it sounds more like the name of one of Superman’s enemies – is built around a compact carbon fibre frame that features really chunky main tubes. The bulbous head tube morphs smoothly into a triangular top tube that’s so broad you could eat your dinner off it. Well, kind of. It’s about 50mm wide up front, so it would be okay if you were having sausages.

Anyway… The down tube is almost as wide and even deeper while down south you get a whopping block of carbon around the skeleton bottom bracket shell – which comes complete with little CNC milled windows. They look cool but we can’t help feeling they’re going to be a pain to keep gunk-free. Out back you get a wishbone seatstay and elaborately sculpted chainstays while up front Merida’s full-carbon fork flows tidily into the frame.

Unlike most frames, the Scultura’s doesn’t have a cosmetic surface layer to the carbon – so ours had quite a patchy rather than a regular appearance. It is the fashions at the moment for top-end bikes, (see also the Cervelo P4) it didn’t bother us in the slightest but you might prefer a tiny amount of extra weight in order to get a prettier finish. 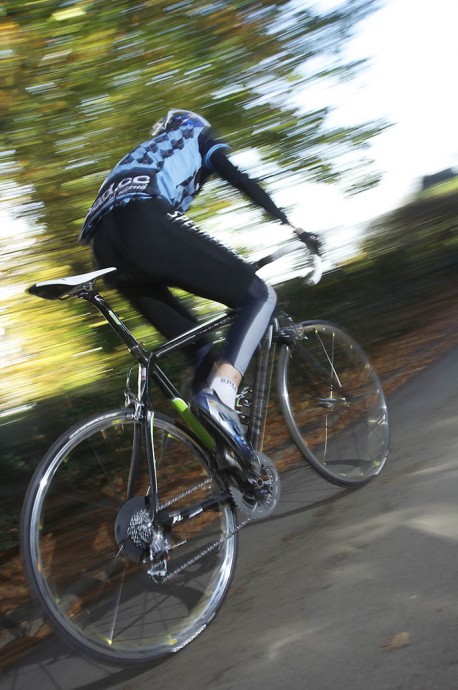 Merida might not have the prestige of Storck or Cervélo, say, but make no mistake, this is an excellent bike built around a high-quality frameset.

The Scultura is a real lightweight. It’s not quite as feathery as the Cervélo R3 SL that we tested a few weeks ago but, at 6.7kg (14.7lb) for our 56cm version without pedals, it’s not far off – you’d do well to notice the couple of hundred grams difference. It still hovers just around the UCI’s minimum weight limit (6.8kg/14.96lb) for racing.

You know that, unless the engineers have done something crazy, that’s going to translate into super-quick acceleration… and it does. Jumping on to the Merida after riding something even just a few pounds heavier is a joy. You put the power in, and the response is lightning fast. There’s no wallowing about, very little sideways flex at the bottom bracket, just a direct dose of speed.

It’s a similar tale on the climbs – whether you’re seated or standing, the Merida just doesn’t hang about. Crank it up and it skips towards the summit without a care; it’s one of those bikes that feels like it’s working with you rather than against you on the hills, giving you an extra shove upwards with every pedal stroke. You’ve got no excuses if you don’t get to the top first. Sorry.

The wheels help here. We really rate the R-Syses (is that the plural for R-Sys?) which are light and extremely stiff. There’s no discernible sideways movement of the rims when you get aggressive. Put them as close as you like to the brake blocks and they never rub, even when you’re churning uphill out of the saddle. We’ve done thousands of miles on several sets now and the tubular carbon spokes have always held them super-tight with virtually no maintenance issues.

Merida make much of the Scultura’s FlexStays – wide and flattened seatstays and chainstays designed to absorb high frequency vibration and improve smoothness. They all say that, though, don’t they?

But the truth is, this is a comfortable ride. Maybe those FlexStays do help. Maybe it’s more down to the amount of seat post extending out the top of the compact frame. And Fizik’s Arione saddle, with just the right amount of flex in the hull and rails, is certainly partly responsible – it’s one of our favourites for comfort at a reasonable weight. Whatever it is, we did a couple of 5hr rides without feeling even slightly battered – no worries on that front at all.

Hit really uneven road surfaces fast and the front end can be a little hard to manage, but that’s the price you pay for the light weight. Shift more of your weight on to the bars and it stays planted. That aside, the Scultura behaves just fine. Merida’s own lightweight forks have reinforcing ribs running across the inside of the blades to provide extra lateral rigidity… or so Merida tell us. We didn’t take a hacksaw to them to check. Combined with the R-Sys wheels, they certainly provide precise steering without any sloppiness. Again, really impressive stuff.

What else do you need to know? SRAM’s Red components work great throughout. We got faultless changes through the short-throw levers, love the performance of the flex-free crankset, and can’t fault the skinny, lightweight brake callipers. All good, though Red does bump up the price massively.

If you’d prefer Campag you’re out of luck because Merida don’t spec it. If you want Shimano you can go for Ultegra SL on the £2,299.99 Evo 907-Com. Two other Shimano-equipped Sculturas are available in the UK too, although they don’t have the same superlight frame.

We’ve got two gripes, both fairly minor. First, we couldn’t get the seat post clamp to hold the saddle rails firmly – though that was probably just down to someone cross-threading the bolt. And second, on a bike that’s carbon pretty much throughout, why the aluminium stem? Don’t get us wrong, the FSA model works fine. But it’s not carbon, is it?

Manufacturers don’t tend to make mistakes with their flagship models – there’s too much riding on it. Lightweight, fast and impressively comfortable, there’s not a lot to argue with here; this is a fabulous high-end road bike. Should you buy it? Maybe. Bear in mind that you can get a bike that’s nearly as good for half the price. The gains get much, much smaller the more you spend. But if you’re after something from the top tier of performance and it has to be SRAM Red for you, this is a hell of a lot cheaper than the Cannondale Synapse that comes in an almost identical build (£5,299). Think of it that way and it starts to look like a credible candidate for your cash. 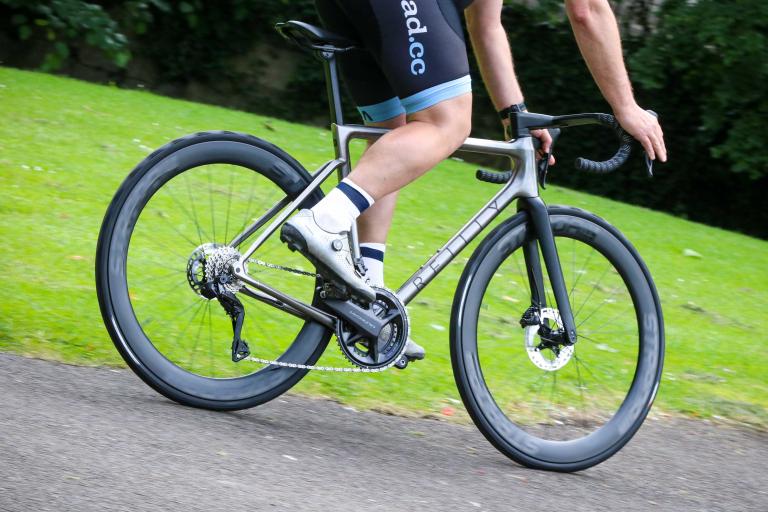 Blurring the edges between race and endurance geometry-wise, but a decent build for the money 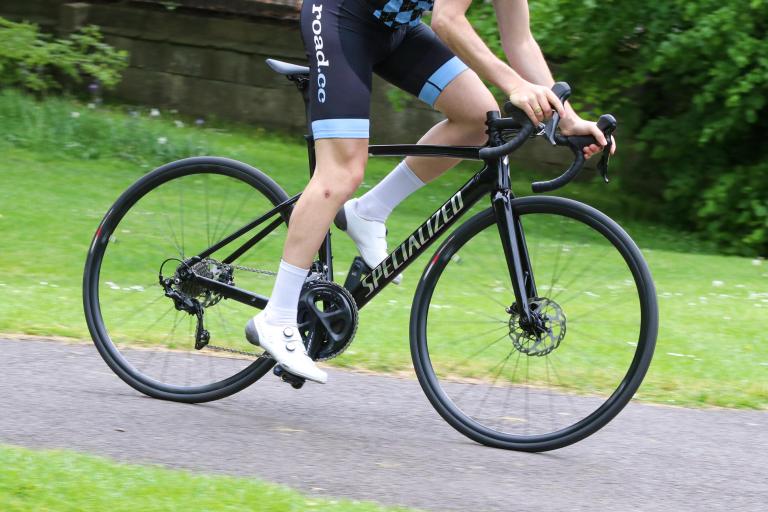 Fast race bike with excellent handing – the price is high, but so is the performance... 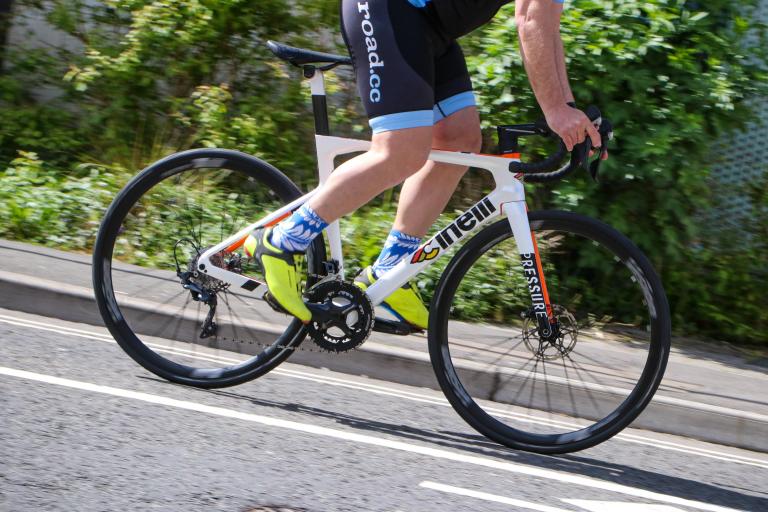 Great looks, plenty of stiffness and a smattering of aero benefits, ruined by a cheap spec list and heavy wheels