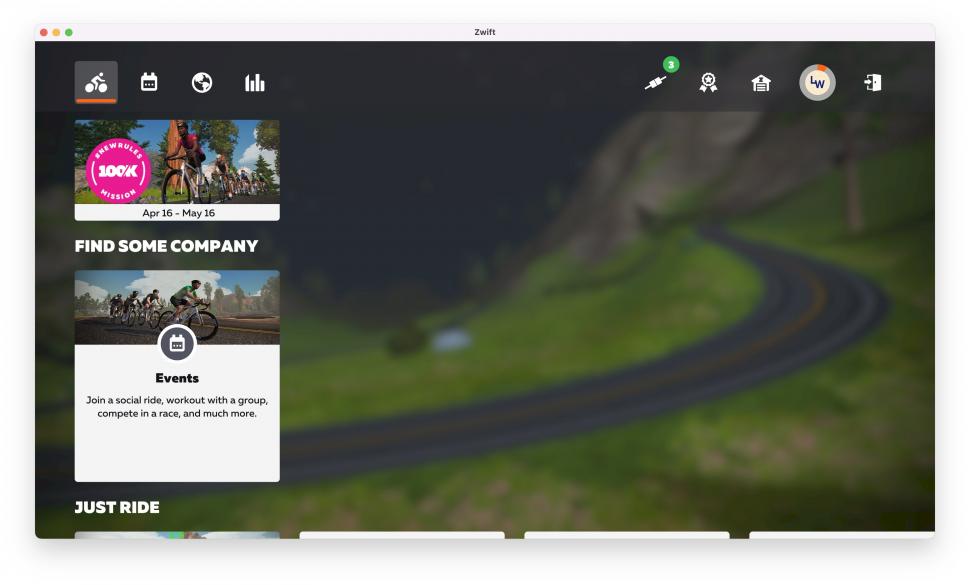 Zwift changes its layout – and people are very angry

Zwift has unveiled its latest range of updates – resulting in inevitable backlash from users unhappy at the app’s new interface.

The virtual training platform last week announced that it was rolling out a new user interface to almost all PC and Mac users who have set their language preference to English. The changes include faster loading times upon start up, an improved events interface, new music, the option to access the garage before starting a ride, and the ability to ride any world while doing a workout.

However, the updates have come in for criticism from some indoor training enthusiasts, who have described the new home screen layout as “pathetic”, while others questioned the omission of Zwift’s ‘Ride With’ feature, which allowed users to automatically join friends currently on course.

While some members of Zwift’s online forum said they were pleased with the changes, others criticised the updated home screen’s tile-based layout and scaling, which one user said meant that “everything requires more clicks/scrolling than it used to.”

On Twitter, Hamish wrote: “The new Zwift UI is pretty cool, but is there supposed to be this big blank area in the middle of the home screen? I also wasn't able to scroll. Otherwise, I love a lot of the other enhancements!”

The new #Zwift UI is pretty cool, but is there supposed to be this big blank area in the middle of the home screen? I also wasn't able to scroll. Otherwise I love a lot of the other enhancements! pic.twitter.com/jLXTfJdMmz

Some users were altogether blunter in their assessment of the new interface, with one arguing that “we literally deserve a refund for this pathetic ‘updated’ screen that we are forced to beta test.”

Another member described the updates as a “nightmare” and claimed that it was now “very cumbersome” to access frequently ridden routes.

The absence of the ‘Ride With’ feature, which – unlike creating a scheduled Meetup Event – enabled users to join someone already riding at any point, has also proven a source of much consternation among Zwifters.

One forum member wrote: “I’ve just cancelled my Zwift account because of this update.

“The ‘Ride With’ feature is important to me and the main reason that I came to Zwift from RGT. Now I can’t use it because Zwift literally ‘forced’ this new (incomplete) update on me and others. Other users may not care about the ‘Ride With’ feature, but this user does.

“So, I’m not paying for something that I can’t use.”

Responding to queries about the future of the ‘Ride With’ function, Zwift’s Community Forum Manager said: “We’re still working on it, but no ETA to announce yet. We know it’s a high priority to bring back.”

Not everyone is upset with the changes, however. One user argued that the new interface “feels more useful and allows access to the things I want to be able to access before starting a ride”, and described the torrent of criticism from the Zwift community as a “classic ‘can’t please everyone’ moment”.

“Recent changes to the Home Screen were made to help Zwifters connect with some of our best in class in-game content,” a Zwift spokesperson told road.cc.

“In the process of making improvements to the home screen, we decided to reprioritise some features that were not heavily utilised, including Ride With.

“While we're glad that the new home screen is making it easier to find Zwift rides, races, and workouts, we are always in the process of developing features that make Zwift more fun and social.

“Based on incoming community feedback, we are currently considering how to reprioritise Ride With in the new home screen so that we can reintroduce this feature to the Zwift community as quickly as possible.”

The launch of the Wahoo X subscription service will give users access to all training content in the Wahoo SYSTM and RGT's virtual cycling routes under a single login.

However, the announcement came as news circulated of around 50 redundancies at the company, something Wahoo said was part of "strategic changes".