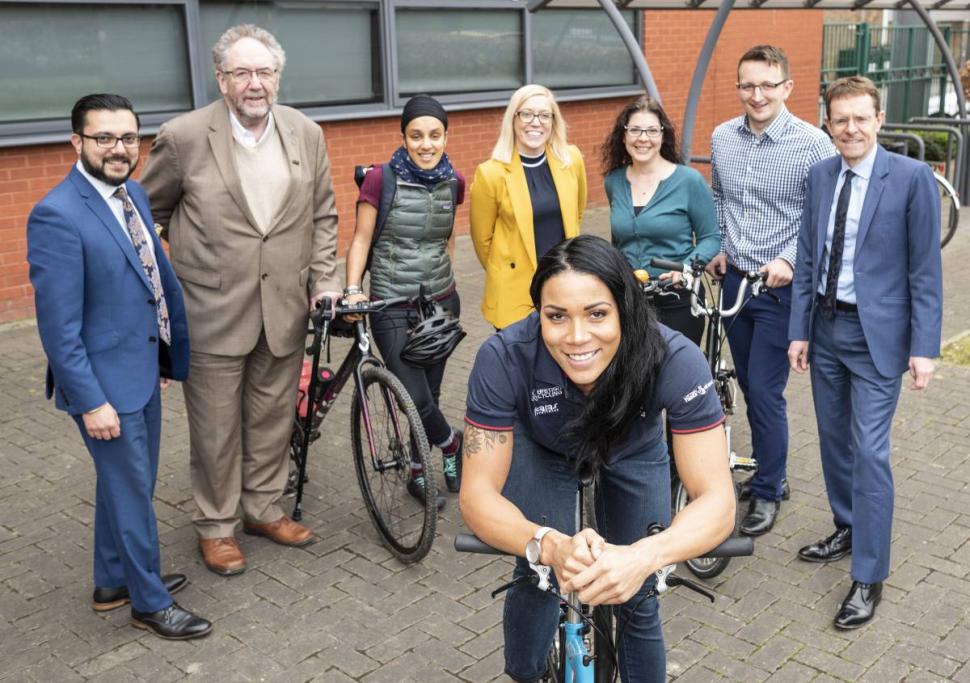 West Midlands is left without a cycling ambassador, as confusion reigns over cycling star's contract renewal - and campaigners say the region needs a cycling champion...
by Laura Laker

The West Midlands has been left without a cycling representative for mayor Andy Street’s office, after a decision not to renew BMX and track world champion Shanaze Reade’s contract.

There was confusion earlier this month over whether the post of West Midlands cycling and walking ambassador had been renewed after the region’s mayor, Andy Street, claimed it had been, shortly before his press team said Reade was now working for them on an "ad-hoc basis". However, Reade's agent said this is not true, and Reade is disappointed not to have been kept on in the role.

It remains unclear why the post was not renewed, and why Street didn’t seem to know Reade was no longer working for him  – given other city regions with metro mayors have active travel representatives.

Earlier in June, when asked about Shanaze Reade’s position, Andy Street said. “Her contract's been extended. So, as far as I'm concerned, we have a cycling champion,” he said.

Street praised her work, saying: “We have Shanaze for very important reasons in that we wanted to make sure that there was a real extension into all communities, not just those who most naturally turn to cycling and I think Shanaze has done a really good job of making cycling more relevant to those less advantaged communities”.

However, when asked to clarify the situation, amid rumours she was no longer in post, Street’s press officer said: “Her official contract with TfWM [Transport for West Midlands] expired at the end of May, but we are looking at working with her on an ad-hoc basis while we review the ambassador role.”

Shanaze’s agent confirms her contract ended, and says while they tried to find other ways of working with TfWM, these offers were declined. Emma Wade, of Bespoke M Ltd, said: “Shanaze’s official role with Transport for West Midlands came to an end at the end of May 2020 and TfWM took the decision not to renew”, adding “Shanaze is disappointed to not be officially involved but remains committed to the active travel cause.”

Greater Manchester has Chris Boardman as walking and cycling commissioner; London has Will Norman; the Sheffield City Region has Dame Sarah Storey, and Liverpool has former Brookside star, Simon O’Brien.

Reade was announced the first West Midlands Cycling and Walking Ambassador in March 2019. The ambassador role was for ten days per year, in which she attended meetings with the other commissioners, visited cycle infrastructure and spoke to media, as well as supporting the role via social media.

Active travel commissioners and ambassadors are appointed by local authorities with metro mayors. Andy Street was elected Conservative mayor of the West Midlands in 2017, and has the greatest metro mayoral constituency outside London, with more than 2.89m people across seven councils. The region also has among the highest unmet demand for cycling in the country, according to a Sustrans report.

Wade says she wanted to continue in the role, and she hasn’t had clarity as to why the contract was not renewed – despite feedback, which they say was “overwhelmingly positive”. They were apparently told the reason was not related to finances.

Wade called removal of the post “odd, given the current climate”, in which most cities are trying to encourage more active travel to help people avoid public transport.

Shanaze Reade was recently appointed ambassador to the #BikeisBest campaign, and says she is currently creating a new coaching and wellbeing platform. Reade is open about her struggles with mental health, and the role exercise has played in overcoming those difficulties. Her agent says: “We are also actively looking for new roles for her to support this passion to get more people from all walks of life to be more active and to walk and cycle."

Clare Maltby, England Director, Midlands & East, at Sustrans, said the charity would like to see an active travel commissioner in the region, a role that has been successful in London and Manchester in delivering plans and building political consensus among council leaders.

She said: “We see that the West Midlands Combined Authority is starting to take positive and bolder steps in tackling inactivity, improving air quality, and creating safer spaces for people to walk and cycle. To fully harness and make the most of these positive steps, we recommend appointing a Walking and Cycling Commissioner for the West Midlands. We think the role should be supported by the necessary powers and resources to make the desirable impact."

Maltby offered Sustrans' support to the Combined Authority "in aiding decision making, guiding policy, and to acting as a critical friend, to ensure mayoral pledges are fulfilled".