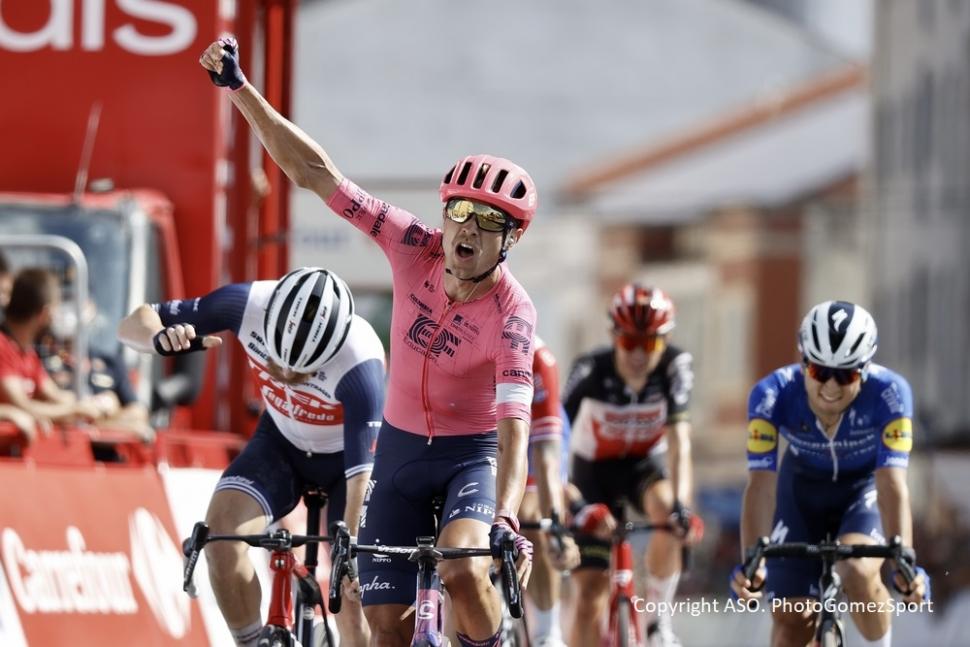 Vuelta Stage 19: Magnus Cort makes it a hat-trick of wins in this year's race

Magnus Cort of EF Education-Nippo has won Stage 19 of the Vuelta a España in Monforte de Lemos, coming round Rio Oliveira of UAE Team Emirates to take his third stage of this year’s race, and the sixth of his career, with fellow breakaway rider Quinn Simmons of Trek-Segafredo third.

As the race crossed from Asturias into Galicia today, Primož Roglič of Jumbo-Visma kept his overall lead ahead of the closing weekend.

With Sunday’s final stage an individual time trial in Santiago de Compostela, it would take a huge upset for the Olympic champion in that discipline not to win the Spanish Grand Tour for the third year in a row.

Cort’s team mate Lawson Craddock, who put in some huge efforts in support of the Dane, was in the lead as what had been a frantic stage over hilly stage with a group of 24 riders getting away entered its final kilometre.

It was enough to ensure that the six other remaining escapees would stay 20 or so seconds ahead of the chasing bunch at the end of the 191.2km stage to contest the finish between themselves – and his work brought its reward for EF Education-Nippo as Cort took the win.

On a tough day raced at a cracking pace, just ahead of even the fastest predicted time schedule, Louis Meintjes of Intermarché-Wanty-Gobert, who started the day 10th overall, abandoned the race following a crash 43km out.

Shortly afterwards Astana-Premier Tech’s Ion Izagirre also hit the deck after colliding with a member of Team BikeExchange’s staff who was standing in the road, although the Basque rider got back on his bike afterwards.