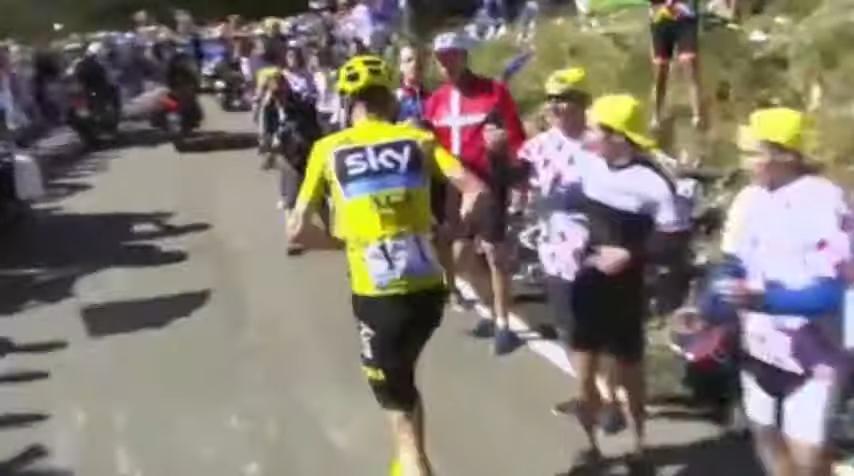 Video: The most memorable Tour de France Bastille Day stages of the past 25 years

There's no racing on 14 July this year - but from Froome to Jalabert via Armstrong, we look back at some of the moments from the past quarter century that live on in the memory...
by Simon_MacMichael

Each autumn, when the route of the Tour de France is announced for the following year, one of the most eagerly anticipated aspects of the route is where the race will be on 14 July – Bastille Day, also known as the Fete Nationale, when entire towns and villages line the roadside in full party mode.

Today should have seen Stage 14 of the race, covering 164 kilometres from La Tour-du-Pin to Villard-de-Lans in the Auvergne-Rhones-Alpes region, but the mountain stage will now take place on 15 September, with the Grand Depart in Nice put back to the end of August.

We couldn’t let the day pass by without taking a look back at some videos from memorable Tour de France Bastille Days of the recent past, including some moments that have already become truly iconic, so grab a brew and enjoy.

Bastille Day seems to be the one day when any preferences in terms of favourite rider, team or national allegiance are put aside to cheer on any Frenchman in the break (and it’s pretty much a given that a large chunk of the home contingent will be trying to make the day’s move).

The last French winner on Bastille Day came three years ago courtesy of Warren Barguil, then with Team Sunweb, on a short 101-kilometre stage in Pyrenees from Saint-Girons to Foix – the first home victory since the now-retired David Moncoutié’s won at Digne-les-Bains 12 years earlier.

14 July on the 2016 edition saw one of the most bizarre sights ever witnessed on the race at the end of a stage to Mont Ventoux that had been shortened to finish at Chalet Reynard where the treeline ends, due to high winds on the exposed upper slopes.

Fans, many of whom would have planned to have been further up the mountain, thronged the lower slopes with the crush causing a TV moto to crash – destroying race leader Chris Froome’s bike in the process. With no hope of grabbing a spare from neutral service, and the team car unable to get through, Froome thought on his feet – literally – and hoofed it up the mountain to limit his losses, eventually managing to get a new bike and holding onto the yellow jersey he would keep all the way to Paris.

Bastille Day had also been a significant day for the then Team Sky rider in both 2013, when he won the race for the first time, and 2015 on his way to his second overall victory – the first seeing him triumph on the Ventoux, the second at La Pierre St Martin in the Pyrenees.

Froome crashed out early in the 2014 edition, but that year again saw the eventual winner take the spoils on Bastille Day – the then Astana rider Vincenzo Nibali, the only man who has been able to break the grip held since 2012 on the yellow jersey of Team Sky and its successor, Team Ineos.

The Italian’s win came at La Planche des Belles Filles, which had only made its debut in the race two years earlier but is now a regular host of stage finishes on a dramatic day on which his other main rival for the overall, Alberto Contador, crashed out with a broken leg.

Bastille Day isn’t always about the climbing, however – and with 30 Tour de France stage wins to his name, it’s unsurprising to find Mark Cavendish’s name on the list of winners of a stage on 14 July.

The Manx Missile’s victory came at Issoudun in 2010, his seventh stage win in the race at that point in only his second participation, and put him one short of Barry Hoban’s British record of eight – a record he would match the following day, and beat before the race ended in Paris a week and a half later.

While, as we saw earlier, there was a 12-year gap in French victories until Barguil won on Bastille Day in 2017, it was not always thus; Moncoutié’s win in 2005 came 12 months after Richard Virenque prevailed at Saint-Flour, but if there’s one French rider associated with 14 July over the past quarter century, it has to be Laurent Jalabert.

In 1995, in the green jersey of points leader, Jaja won on the Fete Nationale in Mende, not too far from his home town of Mazamet, and six years later he would achieve another Bastille Day win in the picturesque town of Colmar in the north-east of the country.

Jalabert’s second July 14 victory, of course, came during the Lance Armstrong era – and the Texan was central to what, alongside Froome’s jog up Mont Ventoux, was the most memorable Bastille Day episode of the past 25 years when, in 2003, ONCE-Eroski rider Joseba Beloki’s wheel locked on the descent of the Cote de la Rochette.

Armstrong, riding behind in the yellow jersey – he would of course be stripped of his seven consecutive wins in 2012 – just managed to avoid the stricken Basque rider (who would somehow finish the stage despite several broken bones), riding across a field before rejoining the race.

And finally … while there may not be a Tour de France stage this Bastille Day, the Fete Nationale is still being marked in Paris, albeit in a much more subdued way than is usually the case.