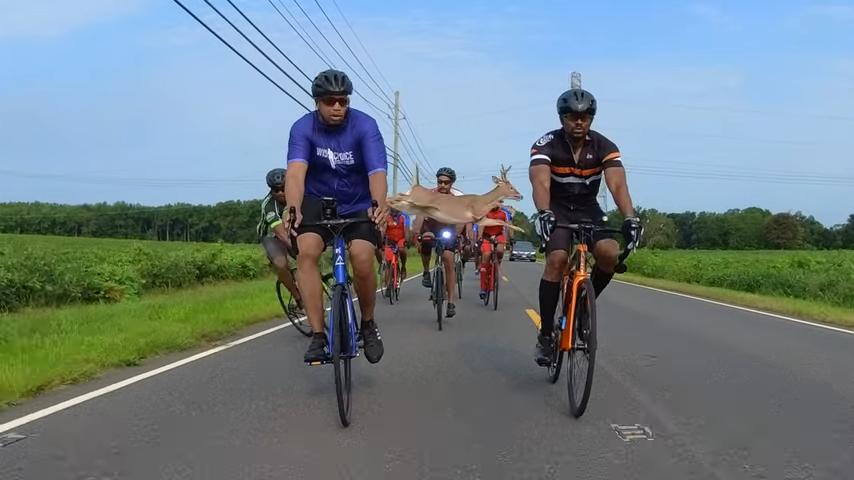 Video: Deer jumps across road and crashes into cyclist

A cyclist’s rear-facing camera has captured the dramatic moment a deer leapt across a road and took down another rider taking part in a charity event in New Jersey.

In footage posted to YouTube by user Jetta32696, a rider can be heard shouting a warning of “Deer, deer!” to the other cyclists before the animal, apparently a young buck, launched itself across the carriageway.

It clipped the front wheel of one of the riders, who came down on his arm with his head also hitting the road surface, but fortunately he did not sustain a serious injury and was able to complete the ride.

The deer somersaulted over the road, landing in a field on the other side, and was also reported to be unhurt.

Jetta 32696 wrote on YouTube: “During the Wise Choice Cycling Club’s Auto Immune Disease Awareness Ride today, one of the riders had an unfortunate incident involving a deer.

“The rider was able to complete the ride as this happened about 3 miles into the 26-mile ride for the day.”

He added: “The deer also walked away from the incident unharmed.”

We’ve reported on a number of collisions between deer and cyclists here on road.cc over the years, including several in the UK – one of which featured in our Near Miss of the Day feature.

Some of those incidents have resulted in bike riders being injured, including a 10-year-old child who sustained a broken rib in London’s Bushy Park earlier this year when an out-of-control dog caused a herd of deer to stampede.

The dog’s owner was fined £800 after admitting causing or permitting an animal to chase another animal in a Royal Park.