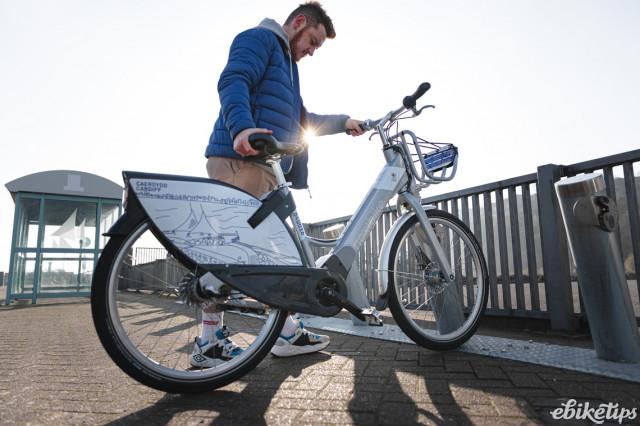 Vandalism and theft of bicycles has forced the temporary suspension of two  cycle hire schemes in South Wales.

Nextbike UK says that it will be suspending its OVO Bike operations in Cardiff and Vale of Glamorgan next week to allow time to repair its fleet of hire bikes there.

The company says that vandalism and theft, as well as threats against its team in Cardiff, have escalated in recent months, leading to it hiring a private investigation firm to help deal with the problems.

But it has warned that the schemes – launched in Cardiff in 2018 and Vale of Glamorgan two years later, and which together have seen 1.2 million journeys made by 136,000 customers – may have to be shut down permanently if the situation does not improve, as happened to Edinburgh’s fleet of Just Eat hire bikes earlier this year.

It says that 300 bikes have been stolen – 130 of those since August this year alone – and that a further 260 have had to be scrapped due to vandalism, including being dumped in rivers or set on fire.

Nextbike, which has worked with Cardiff Council and South Wales Police to try and resolve the issue, says that operations will be suspended from 15 November ahead of a potential relaunch early in the New Year.

Krysia Solheim, Nextbike UK Managing Director, said: “The amount of vandalism and theft that we have seen is simply staggering and not something we’ve experienced to the same extent anywhere else in the UK.

“Our teams simply cannot keep up with the level of damage and theft being carried out.

“We are temporarily removing bikes while we repair those that can be repaired and investigate what safeguards are in place around our bike stations – for example CCTV and street lighting – and how this can be improved.

“We will be readjusting the network to move stations to safer areas where needed. We will also be providing our staff with body cameras for their own protection.”

She continued: “Our schemes help to reduce congestion and CO2 emissions, so it’s especially heartbreaking to be doing this during COP26, when the eyes of the world are on the UK as leaders look to agree on climate change solutions.

“Cardiff Council, Vale of Glamorgan Council, South Wales Police and our sponsor, OVO Energy have been incredibly supportive partners throughout this difficult time and, with their help, we’re also looking at ways of engaging with the wider community to help us prevent the problems.

“It’s a very small minority causing most of the damage. We’ve identified the groups responsible and are working with the police and local authorities to engage with them to deter such behaviour in the future.

“The private investigation firm we recently tasked with monitoring our bike docks in the Cardiff area, successfully recovered 16 lost/stolen bikes over a two-day period. They were shocked by the behaviours they witnessed.

“While it points to a wider social issue, we cannot let this small minority ruin it for the tens of thousands of loyal OVO Bike customers we have in Cardiff and the Vale of Glamorgan.

“We know the vandalism has affected the service for our customers, especially over the last few months, and we’d like to apologise for this because we know people rely on the scheme to get around.

“We’ve always seen our bike share schemes as belonging to the local community – and when the fleets are relaunched, we’ll need the community’s support more than ever. We need people to be our eyes and ears, and to report damage, abandoned bikes or suspicious activity whenever they see it.

“The bikes will be back on the streets early next year, but if vandalism and theft continue at this rate, we will have no other choice but to pull the scheme permanently or significantly reduce the current network,” she added.

The company employs 17 people in Cardiff, and incidents involving staff include one employee being urinated on, and another being threatened with a shovel while trying to recover a bike.

Inspector Darren Grady of South Wales Police said: “Nextbike is an excellent facility which allows residents and visitors to travel around Cardiff and the Vale of Glamorgan in a convenient and environmentally-friendly manner.

“The minority who steal or vandalise these bikes ruin the facility for others and we are committed to working with Nextbike and the local authority to continue clamping down on this mindless behaviour.

“Abuse of Nextbike employees, theft and vandalism will not be tolerated and our Neighbourhood Policing Teams are extremely proactive in arresting those responsible,” he added, saying that nine people have already been convicted of such offences in Cardiff city centre alone.

News of suspension of the schemes comes as Mayor of Greater Manchester Andy Burnham issues an appeal for people to treat the new Bee Bikes cycle hire scheme with respect, recalling how the Mobike scheme launched in 2017 had to be scrapped within less than a year due to people throwing bikes into canals and other acts of theft and vandalism.