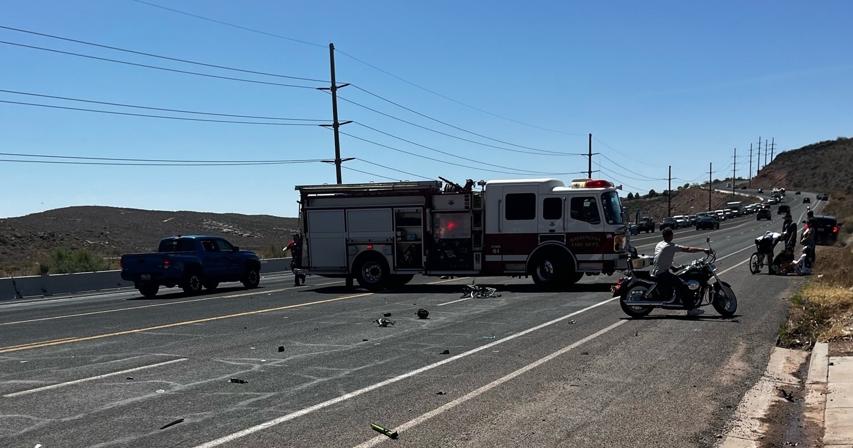 A driver who crashed into two cyclists in Utah, killing both, told police the fatal collision happened after she swerved because she was uncontrollably defecating.

Julie Ann Budge has been arrested and booked into Washington County Jail on two counts of automobile homicide and two counts of driving under the influence with serious bodily injury.

The 47 year old told police she had various medical issues and had swerved into the bike lane after she started uncontrollably defecating, hitting the two brothers from California participating the Spring Tour of St. George event.

Despite witnesses attempting treatment, the riders were unresponsive and died from their injuries in hospital, with the motorist blaming her irritable bowel syndrome for causing the crash.

Photos from the scene show the destroyed bikes of two men who were hit and killed by a passing car Saturday afternoon near St. George.

Arresting documents seen by KUTV show the driver told officers she was on multiple medications and "began to uncontrollably defecate on herself while driving, so she swerved".

Budge was followed by a witness before pulling over several hundred yards from the collision site. The arresting officer wrote that a witness reported "it appeared that Julie did not have the intention of stopping after hitting the two cyclists".

The driver of a Hyundai Genesis reportedly told police she knew she had hit the cyclists but could not get her vehicle to stop.

Arresting documents state that Budge failed sobriety tests conducted at the scene and had been admitted to hospital the previous day, taking Fentanyl through an IV drip.

"At this time, I placed Julie under arrest for suspicion of driving under the influence," the arresting officer recalled. Budge was taken to hospital where a warrant was issued for a blood test.

In addition to the two counts of automobile homocide due to criminal negligence, and two counts of DUI with serious bodily injury, Budge will also face two counts of failure to remain at an accident involving death, and a class B misdemeanour charge of reckless driving and an infraction of improper lane travel.