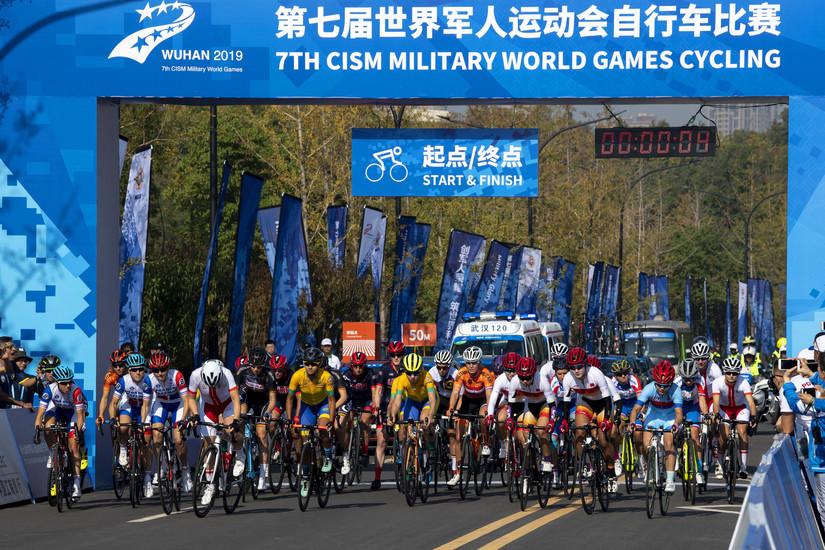 Claim prompts calls for US servicewoman who competed at October's Military World Games in China to be tested for virus...
by Simon_MacMichael

A claim by a self styled, US-based, “investigative journalist” (according to his Twitter biography) that ‘Patient Zero’ in the Wuhan coronavirus outbreak was American cyclist, Maatje Benassi, who competed in the CISM Military World Games there last October is making waves among internet users in China.

Washington, DC-based George Webb has claimed that Sergeant First Class Maatje Benassi, who represented the US in cycling in the 50-mile road race at the event, could have carried COVID-19 to China.

According to the caption of a photo tweeted by Webb of Benassi in action during the race in China last October, she is a security officer at the Fort Belvoir Military Hospital in Virginia, although a separate screengrab of her LinkedIn profile says that since August 2017, she has been an armed diplomatic security officer at the Department of State.

Interesting Coronavirus Patient One n the US is Dutch and shares the same last name as Patient One in Holland, and they are both celebrities. Maatje Benissa is an Intel Officer at Ft Belvoir, VA as well. Her brother Matt is SpaWar. pic.twitter.com/v4XhkSoPSz

However, a US Department of Defense report on the race, much of whuich Benassi spent in the lead before a final-lap crash, says that she is an "Army Reserve noncommissioned officer from the 312th Observer-Controller-Trainer unit at Fort Meade, Maryland."

Confusion over her role aside, the reasons for Webb singling out Benassi, whom he says was born in the Netherlands, are not entirely clear, but in another tweet, he said that it was “Interesting her relative in Holland also has CoronaVirus,”

While the DJ Benny Benassi, whose 2002 track Satisfaction reached number 2 in the UK singles charts and number 1 in the UK Dance charts, shares her surname, he was born in Milan and has Italian citizenship.

Interesting her relative in Holland also has CoronaVirus. https://t.co/Z1C3iTn2Nr

And, as is made clear in the article Webb linked in his tweet, his cancellation of his upcoming North American tour was due to travel restrictions imposed due to Italy being in lockdown, with Benassi reassuring fans that he was in good health, but confined to his home, together with the rest of the Italian population.

Two, and if in the absence of proof of a familial relationship, possibly three factual inaccuracies in a single tweet trying to prove a theory is pretty impressive, though.

With diplomatic tensions high between the United States and China not least because of President Trump’s insistence that COVID-19 originated there and calling it the “Chinese virus,” as well as allegations in the US Senate that it originated in a Chinese chemical weapons lab, Webb’s claims have unsurprisingly been seized upon not only by some internet users in China, but also academics and government officials.

According to The Global Times – a Chinese tabloid newspaper and website published by the Communist Party’s People’s Daily – there are calls for Sgt Benassi to be tested for COVID-19, as well as other members of the US delegation to Wuhan last October.

The newspaper said that Li Haidong, professor of US studies at the China Foreign Affairs University in Beijing, had urged the US government to publish the results of such tests in order to establish the origin of the virus.

It also highlighted a claim made earlier this month on Twitter by Chinese diplomat Zhao Lijian that US military personnel competing at the Military World Games may have brought the virus to Wuhan.

Last week, an article appeared in the New York Post under the headline, How the movie ‘Contagion’ perfectly predicted the 2020 coronavirus crisis.

The 2011 movie, about a global pandemic that originated in Hong Kong, and which was made with expert input from the World Health Organization and the US Centers for Disease Control, has surged towards the top of the download and streaming charts in the past week or two due to its parallels with the current crisis.

If there were one thing missing, it was someone slotting into the role of the conspiracy theorist with a large online following hanging on his every word, as portrayed by Jude Law in the film.

Speaking to the New York Post, health expert Laurie Garrett, formerly a senior fellow for global health at the Council on Foreign Relations, who acted as a consultant on the film, said: “I’ve been in more than 30 epidemics, and the same things happen over and over again. We always get scumbags off the Internet claiming to have a cure.”

Garrett, who is also the author of the 1994 bestseller, The Coming Plague: Newly Emerging Diseases in a World Out of Balance, added: “There’s always a conspiracy theory, and it’s always to blame the CIA or blame the Pakistanis, or whomever.”