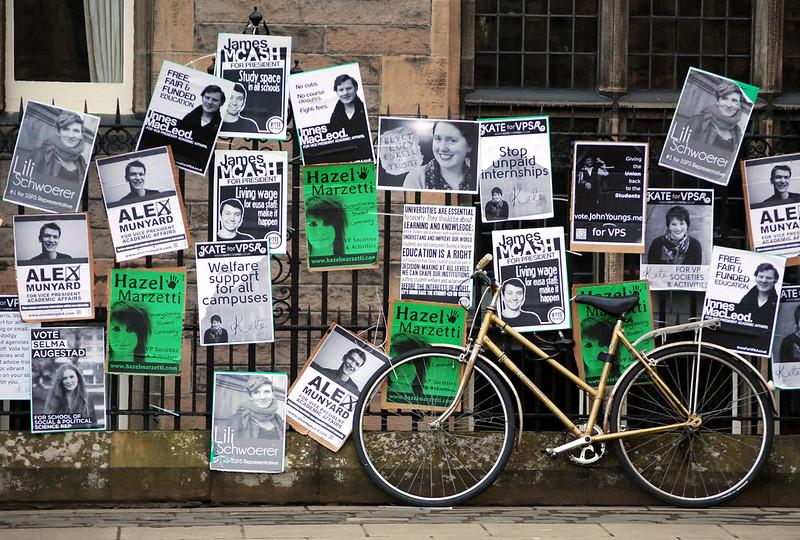 UK universities ranked on cycling – who came out on top?

Institutions were ranked on factors including provision of secure parking and accessibility of local bike shops, with points deducted for theft rates and air pollution
by Simon_MacMichael

The University of Edinburgh has been ranked the top university in the UK for cycling, according to research from the student accommodation search engine, Mystudenthalls.com, with the University of Bristol, in second place, and University of Glasgow, third, completing the podium.

A list of the top 25 higher education institutions ranked them on factors including cycling resources such as bike storage and pro-cycling initiatives, the availability of local bike shops and resources for novice cyclists, with points deducted for the prevalence of bike theft and air pollution.

The ranking comes ahead of a new academic year in which more students than ever are expected to shun public transport and use bikes instead not just because of cost and convenience, but also the coronavirus pandemic.

The University of Edinburgh’s top spot was achieved through initiatives including discounts in local bike shops, a Bike Buddies system to help new or inexperienced cyclists, bike maintenance courses and the provision of Dr Bike sessions.

Cambridge, perhaps surprisingly given its status as the UK’s leading city for cycling in terms of the proportion of the population who ride – many of whom study or work at its universities – came in sixth, partly dragged down by high rates of bike theft.

Dan Roberts, managing director and founder of Mystudenthalls.com, said: “While the national lockdown proved to be a golden age for cycling, the research highlights that many universities could be doing more to cater to the ever growing student cycling community.

“With many students returning to their studies with a new “blended” style of learning and continued anxiety surrounding the pandemic, cycling is one great way to support student wellbeing and encourage social distancing when travelling from halls to lectures.

“No doubt that universities will be investing into more ways to support students in jumping on their bikes.”

Here is the ranking of the top 25 universities.

How did the company arrive at the rankings? Well, points were awarded based on the following factors:

Number of pro-cycling campaigns and initiatives listed on University and SU websites
Accessibility and number of bike storage/cycle parking facilities as listed on university websites
Number of clubs and societies for cycling listed on SU websites
Number of nearby bike/bike repair shops within 3 miles
Cycling resources and information listed on universities’ own online channels- graded out of 10 for comprehensiveness and accessibility. This includes info on hiring schemes, bike shops, local laws, etiquette, road signs, locks, and further resources.

Points were deducted for: