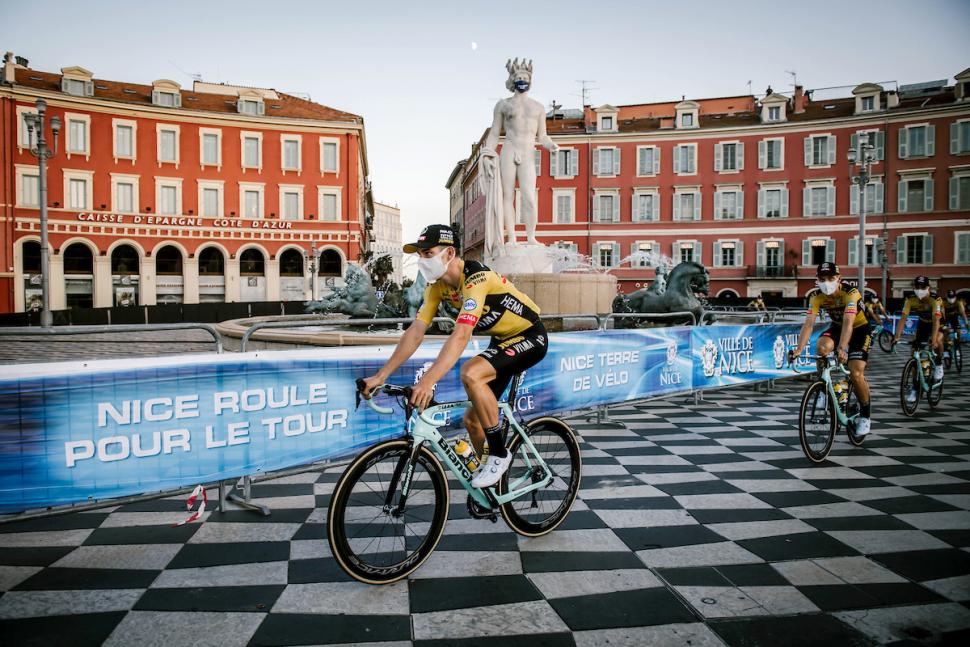 Teams will have to leave race if two riders test positive for COVID-19, not two riders or team staff
by Simon_MacMichael

Teams participating in the Tour de France, which starts in Nice tomorrow, will only be required to withdraw from the race if two riders test positive for coronavirus during a seven-day period.

Previous protocols laid down by organisers ASO had been that they would have to leave the race if two team members – whether riders or support staff – returned a positive test for COVID-19.

That gave rise to concerns that the regulations were too strict and could lead to a number of teams being forced to withdraw.

The UCI has also said that in the event of a rider testing positive, organisers must do everything they can to try and have a second test conducted prior to the start of the next stage, with the aim of eliminating potential false positives.

A rider who does test positive will be required to self-isolate and leave the race.

Under the new regulations, which will also apply to the Giro d'Italia and Vuelta a Espana:

In the case of two or more riders from the same team testing positive for Covid-19 within a period of seven days at a Grand Tour, the UCI will give the event organiser authorisation to announce the withdrawal of the team for health reasons, on the condition, however, that the global medical assessment carried out confirm the positive cases.

The revision to the rules comes after Lotto-Soudal yesterday sent four members of staff, two of whom had tested positive for coronavirus, from the race.

David Lappartient, president of world cycling’s governing body, said: “The adjustments made today to the UCI protocol have enabled us to find the right balance between the legitimate concerns of teams faced with the risk of exclusion and the vital preservation of the peloton’s health.

“I call on all cycling’s families, in particular the riders and teams, to continue acting with the same sense of responsibility and united spirit that they have demonstrated since racing resumed.

“All the protective measures respecting the rules such as wearing a mask in the hotels and buses must be scrupulously followed.

“We must give the Tour de France and the 2020 cycling season a chance to carry on to the end, and give our sport, heavily affected by the health crisis, a chance to move forward.”

As we reported yesterday, the Alpes-Maritimes department, of which Nice is capital, is now one of 21 throughout France that has been designated a “Red Zone” by the government following a rise in the number of COVID-19 cases there.

Among special measures being implemented by the prefecture for the Grand Depart are the compulsory wearing of masks by spectators as well as strictly controlled access to key climbs, which will only be accessible to people on foot or on bike.

Meanwhile, the elements may play a crucial role over the next couple of days, with rain forecast for Nice in the afternoon, and possibly even thunderstorms – while on Sunday, the Mistral wind is expected to blow, and with a lot of twists and turns on the closing circuit in the latter part of the stage, that raises the possibility of echelons forming.

We’re less than 24 hours away from what may well be the strangest edition of the race in our lifetimes. It’s impossible to predict whether it will go its full length, but however long it lasts, it should be gripping.