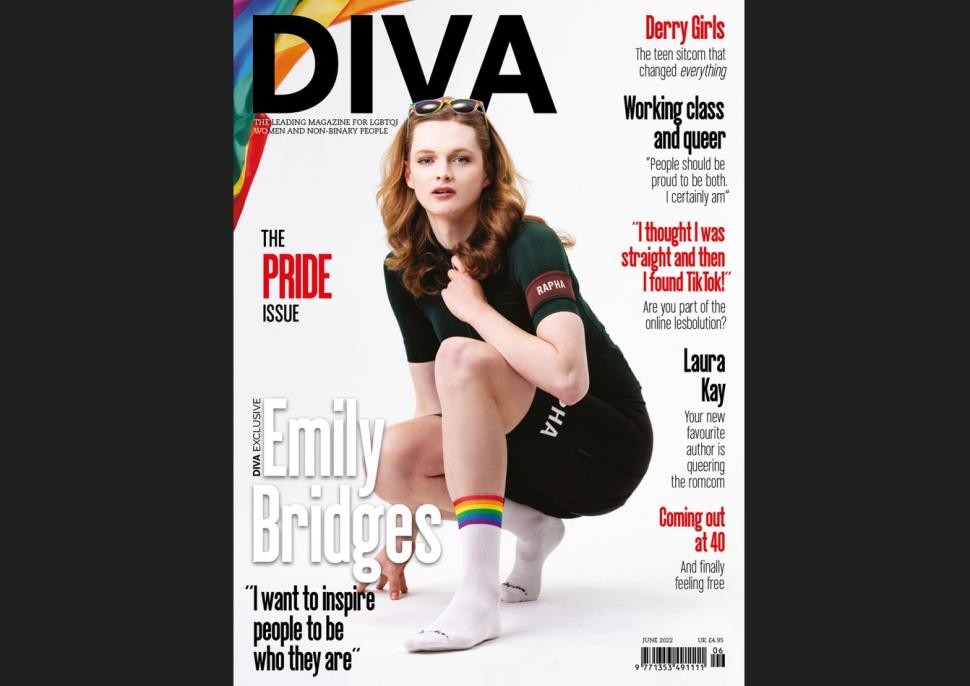 “Trans rights are human rights,” says Rapha – “all athletes should have the opportunity to race”

Rapha has said that “trans rights are human rights” in a reference to Emily Bridges, the transgender cyclist who is pictured on the cover of this month’s issue of Diva, the magazine for LGBTQI women and non-binary people, wearing kit from the London-based clothing and accessories brand.

> Transgender cyclist Emily Bridges insists she has no advantage over rivals

Bridges had been due to make her debut in a women’s race at the National Omnium Championships in February after her testosterone levels fell within those allowed by British Cycling under its Transgender and Non-Binary Participation Policy.

However, world cycling’s governing body, the UCI, subsequently barred the 21 year old from competing at the event and British Cycling has since suspended its policy.

In her interview with Diva, Bridges insisted that the hormone replacement therapy she has undergone means she does not have a physical advantage over riders she would be competing against in women’s races.

“I don't have any advantage over my competitors and I've got data to back that up,” maintained the cyclist, who has been undergoing testing at Loughborough University.

In response to a tweet from road.cc linking to our coverage of Bridges’ interview, Rapha said: “Trans rights are human rights. We believe that all athletes should have the opportunity to race. We don’t have all the answers to how this should be actioned but we’re standing by our athletes and supporting them.”

Transgender cyclist Emily Bridges insists she has no advantage over rivals

Trans rights are human rights. We believe that all athletes should have the opportunity to race. We don’t have all the answers to how this should be actioned but we’re standing by our athletes and supporting them.

There are few issues in sport right now that are as polarising of opinion as whether transgender athletes should be permitted to compete in women’s competitions, and SRS Events said in a tweet: “Can’t understand why Emily doesn’t understand that it’s unfair to cis women if she takes part in women’s cycle racing events?”

In response to that tweet, Bridges' mother Sandy Sullivan responded, saying: "Because she's spent the last nearly 18 months as part of detailed scientific research studies which includes muscular biopsy data amongst other DETAILED scientific testing. Compare [the above] to previous data held by BC (5 YRS WORTH).”

Because she's spent the last nearly 18 months as part of detailed scientific research studies which includes muscular biopsy data amongst other DETAILED scientific testing. Compare ⬆️ to previous data held by BC (5 YRS WORTH)

Bridges also told Diva that transgender athletes are “the current punching bag populist movements like to go for. We are, at the moment, who the culture war is against.

“There needs to be more positive voices and more education. People are constructing opinions off not the whole story.

“The more studies that are done, the more concrete evidence there will be.

Rapha is controlled by an  RZC Investments, owned by Tom and Steuart Walton, two of the heirs to the Walmart grocery fortune.

The retailer, founded by their grandfather Sam Walton, is based in Bentonville, Arkansas.

Rapha relocated its North American HQ in 2020 from Portland, Oregon to Bentonville, which in January hosted this year’s UCI Cyclo-cross World Championships, with Walmart acting as headline sponsor to the event.

In March, the Republican governor of Arkansas, Asa Hutchinson, vetoed legislation aimed at banning gender-confirming treatments or surgery for transgender youth. His veto was subsequently overturned by the state legislature.

Tom Walton said in a statement published at the time on the website of the Walton Family Foundation that he backed the governor’s position, reports Bike Industry and Retail News, although it noted that Hutchinson had previously signed into law legislation banning transgender women and girls from competing in school sports.

“We are alarmed by the string of policy targeting LGBTQ people in Arkansas,” Walton said.

“This trend is harmful and sends the wrong message to those willing to invest in or visit our state.

“We support Gov. Asa Hutchinson’s recent veto of discriminatory policy and implore government, business and community leaders to consider the impact of existing and future policy that limits basic freedoms and does not promote inclusiveness in our communities and economy.

“Our nation was built on inalienable rights and strengthened by individual differences. Arkansas has been called the land of opportunity because it is a place where anyone can think big and achieve the extraordinary.

“Any policy that limits individual opportunity also limits our state’s potential,” he added.