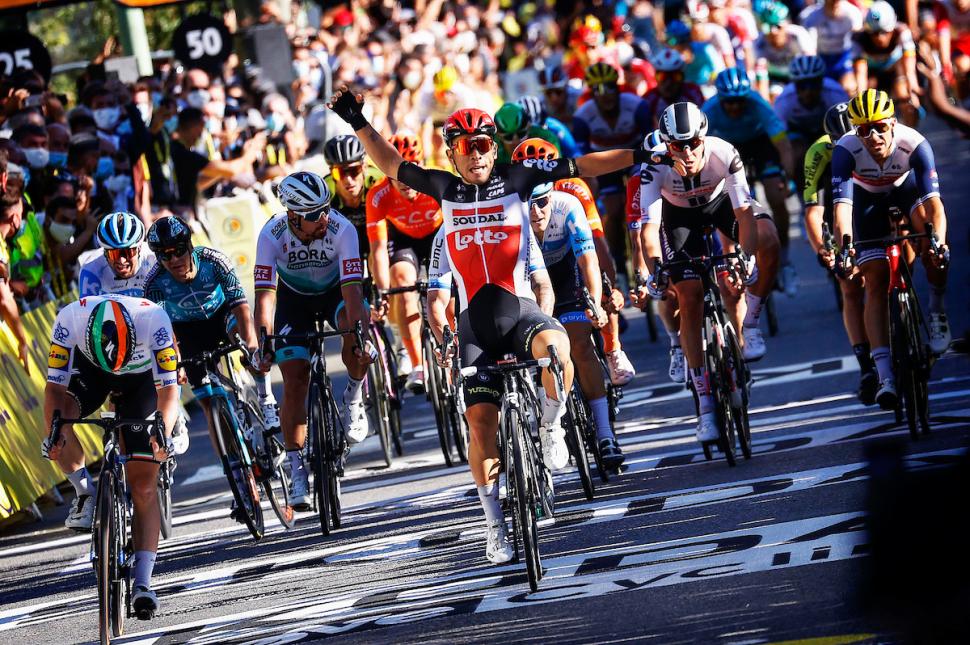 Caleb Ewan of Lotto-Soudal snatched victory in Stage 3 of the Tour de France from Sam Bennett in a sprint raced into a headwind in Sisteron this afternoon. Bennett's Deceuninck-Quick Step team-mate, Julian Alaphilippe, remains in the overall leader's yellow jersey.

Ewan – winner of three stages at last year’s race, including on the Champs-Elysees – squeezed past Bora-Hansgrohe’s Peter Sagan as he hunted down Bennett, the Australian passing the Irish champion just ahead of the line.

After two stages starting and finishing in Nice, today’s stage covered 198km over undulating terrain with a trio of Category 3 climbs as the peloton headed north west from the Côte d’Azur city towards the finish in Sisteron.

Naesen soon drifted back to the peloton and the remaining three escapees built a lead of around 3 minutes over the main group, with Perez taking maximum points at the first KOM point, the Col du Pilon, to move ahead of Cosnefroy in the mountains competition.

Perez also took maximum points on the Col de Faye, after which Cousin made a solo attack, with the Total-Direct Energie going on to spend more than 100km on his own at the front of the race.

He was eventually swept up with a little over 16km to go as the sprinters’ teams began to take position at the front of the bunch, the pace controlled by Deceuninck-Quick Step which had controlled the pace of the peloton and kept the break in check throughout the day.

One of his breakaway companions, Perez – who would have been pulling on the polka-dot jersey had he completed the stage – was out of the race by then after breaking his collarbone in a crash on the descent of the Col des Lèques with around 65km remaining.

It subsequently emerged that he had sustained a puncture and then crashed in an incident involving his own team car, which is bound to once again raise the issue of rider safety.