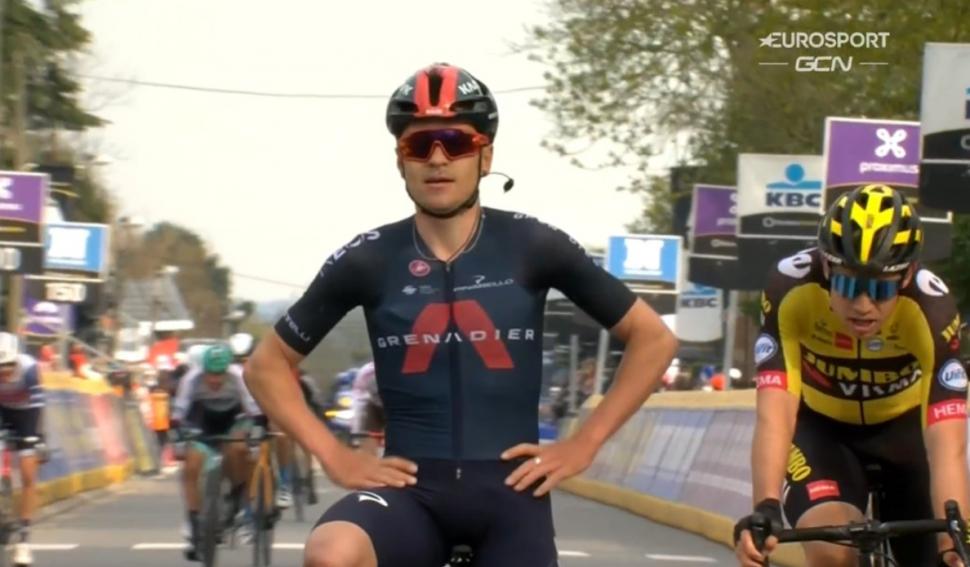 Tom Pidcock is a surprise inclusion in the Ineos Grenadiers squad for Gent-Wevelgem today, as he aims to challenge at next weekend’s Tour of Flanders. The world cyclocross champion was expected to miss the Belgian classic after abandoning last Saturday’s Milan-San Remo because of stomach issues.

The British rider will be joined at the start line in Ypres this morning by Jhonatan Narvaez, Dylan van Baarle, Elia Viviani, Ben Swift, Ben Turner and Luke Rowe, as part of a strong Ineos classics line-up.

After his impressive worlds win in Fayetteville, Pidcock’s road season has been somewhat derailed by a mystery stomach problem which forced him to sit out Strade Bianche, his first big target of the season, before pulling the pin early at Milan-San Remo after being dropped on the small capi climbs before the finale.

However, Ineos racing director Rod Ellingworth is confident that the 22-year-old remains on track for the Tour of Flanders, the second monument of the season and one that suits Pidcock’s skillset perfectly.

Pidcock was initially scheduled to return to action at Dwars door Vlaanderen on Wednesday as his only pre-Ronde tune up, but seems to have recovered from his recent bout of illness well enough to tackle today’s 248.9km slog across Flanders’ exposed fields and cobbled bergs.

> Pidcock a doubt for classics: “We can't find the cause of his stomach problems,” says coach

“He’s fine now, he’s been training okay and I think he’s looking forward to the Classics.”

Ellingworth also said that the stomach problems which forced Pidcock to abandon his Milan-San Remo challenge before the racing had truly ignited were a separate issue to the illness which led him to miss Strade Bianche.

“He trained well before [San Remo]. I think it was something we couldn’t really put our finger on, to be honest, he just had bad guts. So we’re not 100% sure, but he seems okay now.”

Earlier in the week we reported that Pidcock was due to undergo a blood test on Wednesday to find the cause of his recent health problems. His coach Kurt Bogaerts said that a racing schedule would only be drawn up once the issue was resolved.

Even if Pidcock isn’t at 100 percent come the roll out in Antwerp next Sunday, there are still plenty of chances for him to salvage his classics season in the non-cobbled spring races.

The British rider excelled in the hillier classics last spring, winning Brabantse Pijl before finishing second to Wout van Aert at Amstel Gold. If healthy, he is likely to be a top contender in those races again this year, and also has plenty of time to build his form for Flèche Wallonne and Liège-Bastogne-Liège, which take place on 20 and 24 April respectively.

“Somebody like Tom will always be busy with objectives and he’s got quite a few things he wants to tick off this year, so I’m sure he’ll be back this week,” Ellingworth said on Friday.

Pidcock isn’t the only pro rider to have experienced health issues this season. The Paris-Nice peloton was hit by a devastating bug which saw only 59 riders complete the race, while the Briton’s Ineos teammates Filippo Ganna, Richie Porte, Michał Kwiatkowski and Pavel Sivakov have all been forced to rethink their race calendar due to illness this week.

Ellingworth added: “It just seems to be coming from all directions at the minute. We’re seeing a lot of people across the peloton getting things and bugs.

“I think as much as we’re doing the maximum we can, it seems like quite a lot of people are getting sick. I noticed Jumbo-Visma started Catalunya with six riders, Jack Haig left the race, and I think a lot of riders yesterday at Coppi e Bartali didn’t start with a similar thing.”