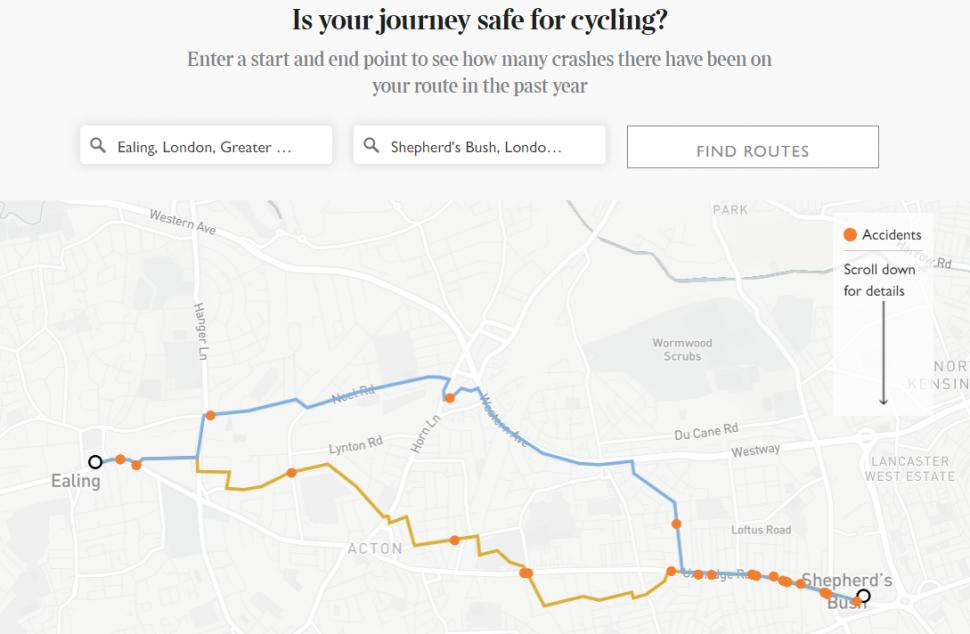 The Times has launched an online tool which it says will help cyclists find the safest routes to schools or workplaces.

The newspaper, which unveiled the initiative at the weekend, says it analysed three decades of data relating to road traffic collisions on Great Britain’s roads and compares those to Census data regarding cycle commuting.

By entering start and finish points of a journey on The Times website, a map is generated by the MapBox platform, which uses information provided by road users to help it select the routes most suitable for cycling, returning as many as three routes depending on how many suitable options it finds.

Here’s an example showing two routes from Cherry Hinton on the outskirts of Cambridge to King’s Parade in the city centre. 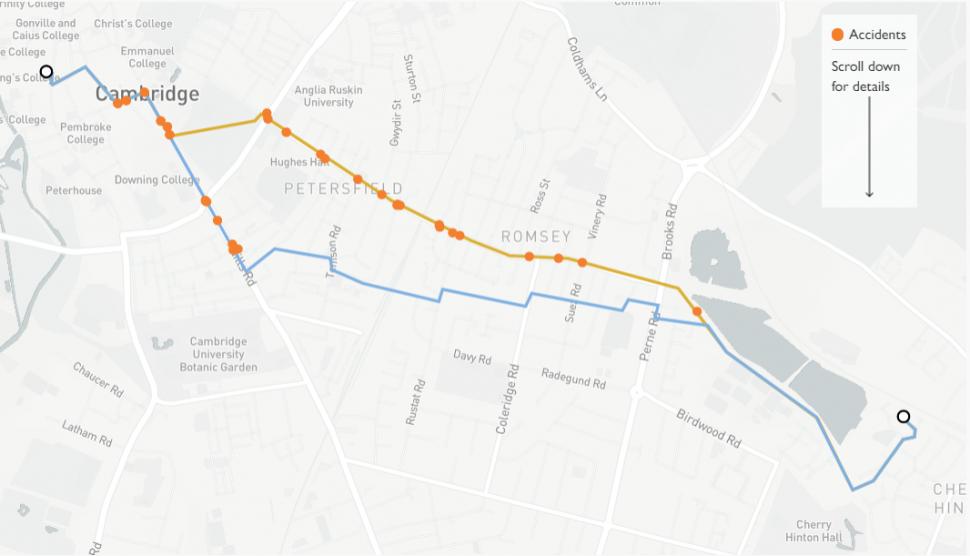 So how does the tool work? Here’s what The Times has to say:

To account for the number of people cycling, we have taken census data and created a sample of the 10,000 most popular cycling commutes based on the neighbourhoods where people report that they commute to and from. An estimate for the number of trips commuters will make is combined with a measurement for the length of the route to determine a ratio: crashes per 1,000 miles cycled.

Starting with the number of commuters who travel on each route as recorded by the census, we then calculate the distance commuters will travel by multiplying that number by the number of working days in three years. We then multiply by the length of the route, in miles, to return the distance covered. This allows us to make a more accurate estimate of road use.

Below the map itself, there is also a box showing cycling casualties over the past 12 months (we assume that means the most recent 12 months for which data are available) on the routes shown – this example being from the two routes in Cambridge highlighted above. 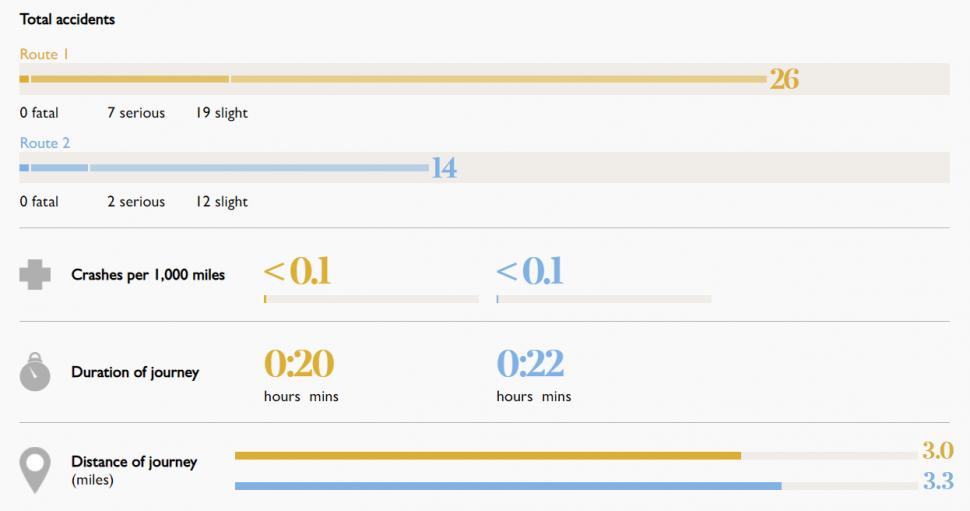 The newspaper also analysed what it says are the 10,000 most popular commuter cycling routes in the country and discovered that the two most hazardous ones for riders are in the cities with the highest levels of cycling, Cambridge and Oxford.

In Cambridge, the A603 which heads into the city centre from the north east and has upwards of 1 million bike journeys annually according to the cycle counter on Parker’s Piece, saw one crash for every 171 miles travelled over the past three years.

Meanwhile in Oxford, the most dangerous route was Iffley road, with one crash per 192 miles cycled, says The Times, with other routes converging at The Plain roundabout as they head towards the city centre, including Cowley Road, also seeing high casualty rates.

Commuting route selection, of course, depends on a number of personal factors, at least where there is a choice – in Oxford, for example, the city’s rivers and floodplains mean that there are an extremely limited number of options whichever direction you approach the city centre from.

For those who do have a range of options, a number of trade-offs can be involved that depend on the individual; for example some may want to get from A to B as quickly as possible and don’t mind riding on busy roads, while others may prefer quieter roads, or avoid certain junctions, or even a more scenic and circuitous journey.

Finding the ideal route is therefore something of a trial and error process and very much down to the individual and the value of the tool from The Times we imagine will mostly be to new or returning cyclists starting to commute for the first time.

And clearly one potential issue with the route mapping tool from The Times is that it may not reflect recent improvements to infrastructure that have made routes that previously saw high numbers of crashes safer for cyclists.

For the most up-to-date and bike-friendly mapping, however – complete with details of cycling infrastructure, and almost 100,000 photos taken on the ground – we’d recommend taking a look at the not-for-profit mapping service, CycleStreets.