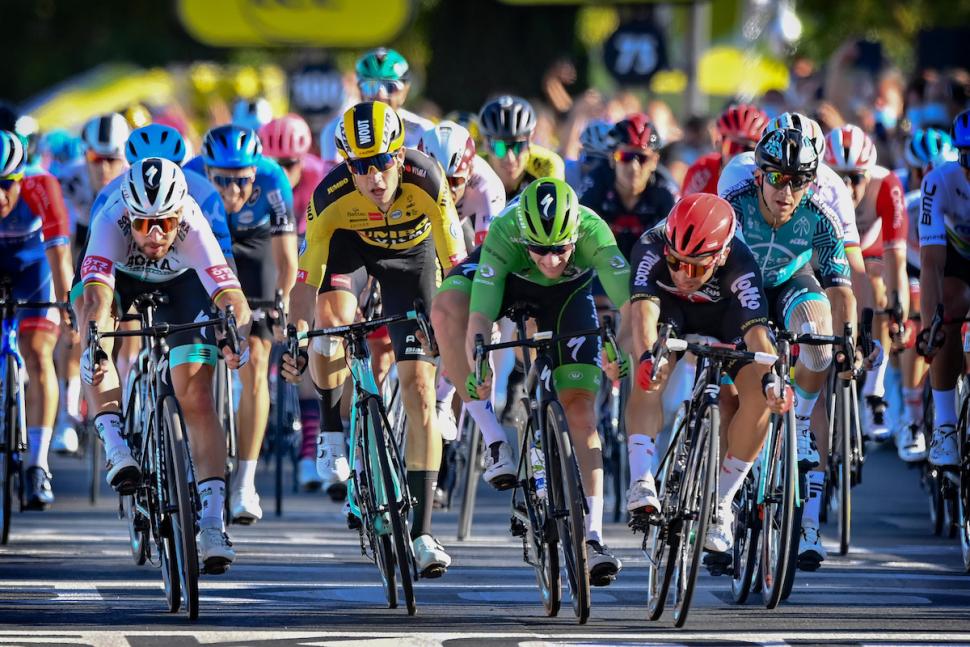 Caleb Ewan of Lotto-Soudal, second to Deceuninck-Quick Step's Sam Bennett yesterday, came off the Irishman's wheel with perfect timing to win Stage 11 of the Tour de France in Poitiers today. Bora-Hansgrohe's Peter Sagan, who beat Bennett to second place by a hair's breadth, was subsequently relegated to last place in the group for dangerous sprinting.

In a hard-fought finish into a headwind on a 1.5km home straight at the end of the 167.5km stage from Chatelaillon-Plage, Sagan came up fast on the right-hand barriers, but nudged Jumbo-Visma's Wout Van Aert to make room to get past.

As a result, the Belgian was pushed to the left, which also resulted in Bennett, to his left, having to adjust his line slightly.

Sagan has been relegated for this action.
Video via @LeTour #TDF2020 pic.twitter.com/Y8N4x27u02

Earlier, the latter had picked up the maximum points remaining at the day's intermediate sprint after lone escapee Matthieu Ladagnous of Groupama-FDJ, the sole candidate for the day's combativity award, had passed at the head of the race.

Bennett had enjoyed a 21-point lead in the points competition this morning over Sagan, who is seeking a record eighth green jersey, and has now extended that to 68 points after the Slovak rider's relegation.

Jumbo-Visma's Primoz Roglic remains in the race leader's yellow jersey ahead of tomorrow's tricky-looking stage from Chauvigny to Sarran.

Caleb Ewan on his second stage win of the race

It was such a crazy finish. I was in the front with 1.5km to go and dropped back because of the head wind. After my first stage win I knew I had to keep calm and wait for the right time and the gap to open. That happened quite late to the finish. I did a big throw on the line and didn’t know if I won. I had a real desire to win today. After yesterday I was disappointed and I am so happy to repay my teammates with the win.

I am super happy with my two stage wins. One just takes the pressure off. Then after the first one you always want a second. And now I for sure want a third victory, especially in Paris with the Champs-Élysées. So I hope to get through the mountains and get another chance in Paris.

With Lotto Soudal we are down to five guys. That means we only have four guys to do the work for me in the sprint stages. After the hard work during the stage I had to manage with two guys in the final 10km. The other teams put us under a lot of pressure with the attacks. But my two guys rode like ten guys. They did such a terrific job.”

My closest opponent Sam Bennett is one of my best friends. It is always business when it comes down to sprinting. But we are happy for each other when we win. I was very happy for him yesterday getting his first win. You saw how much it meant for him and I know how hard he worked for it.

The guys did a fantastic job looking after me and I got to enjoy another beautiful day in this nice jersey and get a lot of support and applause from the roadside fans.

The sprint was really nervous and I found myself in the front too early, so I drifted back a bit, but it was too late. Despite that, I tried to limit my losses and get the most out of it, get the best result I could.

Would have been nice to add another win, but second is still a strong result in these conditions, especially as it helps me increase my lead in the points standings.