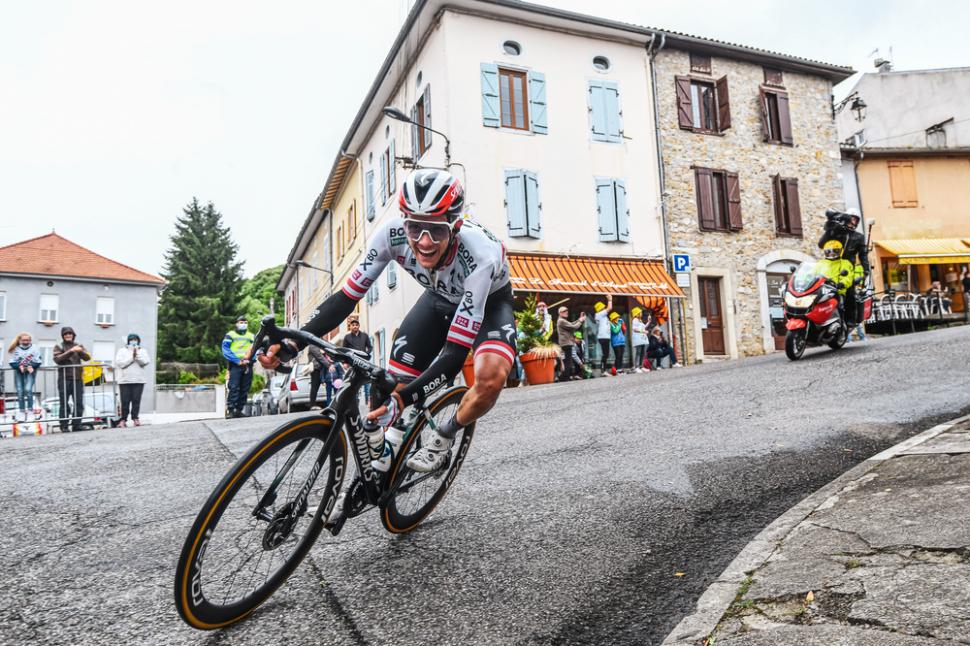 Patrick Konrad of Bora-Hansgrohe, second to Trek-Segafredo’s Bauke Mollema in Quillan on Saturday, has won today’s Stage 16 of the Tour de France in Saint-Gaudens after launching a  long-range attack from the break and riding solo to victory. With no major attacks from the overall contenders' group, Tadej Pogacar of UAE Team Emirates maintains a commanding advantage ahead of successive summit finishes in the next two stages.

On a rainy day in the Pyrenees as the race headed back into France following yesterday’s rest day in Andorra, the Austrian national champion, who was also second in a stage of the Giro d’Italia last year, was alone at the front of the race coming off the top of the day’s last major climb, the Col de Portet d’Aspet.

His closest pursuers, David Gaudu of Groupama-FDJ and the Italian National champion, Sonny Colbrelli of Bahrain Victorious, seemed to have the 29 year old in their sights on that ascent.

But on a very technical descent on wet roads – and passing the site where Olympic road champion Fabio Casartelli lost his life after crashing during the 1995 Tour de France – the pair eased off on their chase.

Konrad had an advantage of more than a minute as he headed up the day’s short, final categorised climb, around 800 metres long and crested with just under 7km to go, as he rode to the biggest win of his career - and his first outside the Austrian national championships, where he has twice won the road race.

Colbrelli finished second on the 169km stage from Pas de la Casa, with Team BikeExchange’s Michael Matthews third, both closing the gap on points classification leader Mark Cavendish of Deceuninck-Quick Step, who came home in the gruppetto well inside the time limit.

Cavendish has 279 points, with Matthews now 37 points behind him in the race for the green jersey. Colbrelli leapfrogs Jasper Philipsen of Alpecin-Fenix back into third place, but lies 47 points behind Matthews.

The yellow jersey group containing all the riders in the top ten of the general classification this morning crossed the line nearly 14 minutes down on the stage winner, defending champion Pogacar retaining his overall lead of 5 minutes 18 seconds over EF Education-Nippo’s Rigoberto Uran.

I'm speechless, I can't find the words to describe the feeling! Not only is it my first ever WorldTour victory, but it is also in the Tour de France, the world's biggest cycling race.

This victory goes to my family, my friends, to everybody that believed in me and, of course, to my team, BORA-Hansgrohe. They always trusted in me, they always told me I had the talent and I had to fight for it.

This win happened at the right moment, to win a stage here wearing the Austrian champion jersey makes me really proud. I have already been in the breakaway three times in this Tour, but I was always waiting until the finale. It wasn't the best decision.

So, I told myself that if I found myself once again in that situation, I would be that rider. I gave it a try and I'm really happy it worked out and I had the legs to take it to the finish.

When I crossed the last kilometre mark, I thought it was going to be painful again but, in the end, I had the time to celebrate.

I really believed in it only in the last 500 metres when the sports directors passed me. I'm extremely happy and I think I can enjoy this moment.