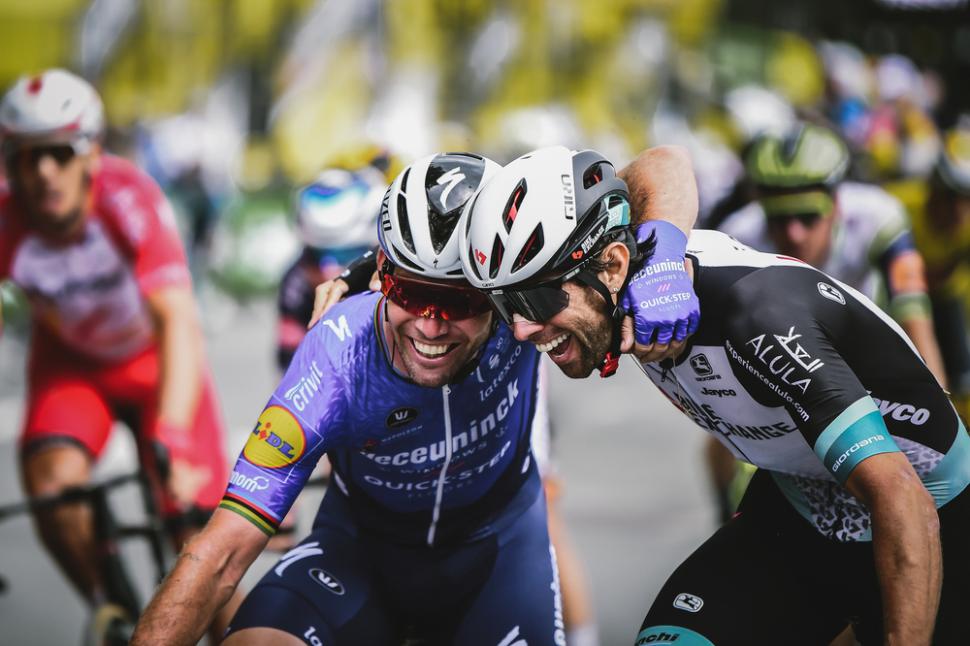 The peloton left it very late ... but made the catch of escapee Brent Van Moer just metres from the line
by Simon_MacMichael

Mark Cavendish has taken his 31st career stage victory at the Tour de France to move within three of Eddy Merckx's all-time record on today's Stage 4 into Fougeres - but the peloton left it very late to catch escapee Brent Van Moer of Lotto-Soudal, reeled in just metres from the line.

It’s 13 years since the Deceuninck-Quick Step rider, already the most successful sprinter in the history of the race, won the first of those stages – this is the second time he has won in this Breton town – but it is five years since he last raised his arms in triumph at the Tour.

Besides his stage win, 10 years after clinching the points competition for the one and only time, he now takes the green jersey, worn today by team-mate Julian Alaphilippe.

The world champion, together with leadout man Michael Morkov, were involved a frantic chase in the final 2 kilometres of the 150.4km stage from Redon in which it was touch and go whether Van Moer would be caught.

Lotto-Soudal’s team at this year’s race had been built around Caleb Ewan, but the Australian sprinter broke his collarbone when he crashed in sight of the line in Pontivy yesterday.

His departure gave Van Moer free rein to get in the break today, where he was joined by the Cofidis rider Pierre-Luc Périchon, the pair going free after a slow start to the stage due to what is best described as a half-hearted rider protest following yesterday’s crashes.

Van Moer attacked his fellow escapee with 14km remaining, and heading into the final 10km had an advantage of around a minute, with none of the sprinters’ teams apparently willing to take up the chase in earnest.

With 2km remaining, the 23-year-old was still 20 seconds ahead, and there was every chance that his first pro win would come at the Tour de France until he was passed just 200 metres from the line.

The sprinters contesting the win thundered past the Belgian – in the final 500 metres, Cavendish was riding at 63km an hour, and took the stage from Nacer Bouhanni of Arkea-Samsic, with Jesper Philipsen of Alpecin-Fenix third.

Only riding the race due to the knee injury suffered by last year’s green jersey winner Sam Bennett, Cavendish, who has been plagued by injuries and illness in recent seasons, rolled back the years today –  and given his struggles, no-one would begrudge him his tears today after clinching the stage.

Now with six sprint stages left in the race, the last of those on the Champs-Elysees where he was undefeated for four years from 2009, one of the big sub-plots of this year’s race – not one the 36 year old would subscribe to himself – will be whether Merckx’s record can be broken.

I don’t know what to say, man. Like, just being here is special enough, you know. I didn’t think I’d ever get to comeback to this race.

Just fire, man, just fire from the whole team. We didn’t know if we were going to get them. We lost Ballero [Ballerini], same thing as happened to me [yesterday], he lost spokes of his wheel.

But you see what a team this is, you’ve got the green jersey, the world champion, Julian Alaphilippe … He just comes to give the final pull to catch the breakaway, putting everything in. So many people didn’t believe in me, but these guys did, and they do.

I thought I was never coming back to this race, honestly. When you come to Deceuninck-QuickStep, you’ve got the best riders in the world so there wasn’t even a thought to come here, you know.

But the stars aligned, somehow. I never ever want bad things to happen to good people, but after the last year, it’s just nice to have good luck for myself, fuck …

1
Father and son named as cyclists killed in suspected hit-and-run
2
"Our intention was not to hide these changes": Strava apologises for price hike controversy
3
Driver assaulted cyclist for questioning mobile phone use
4
Van Rysel to launch seven new bikes, including high-end race models
5
Cyclist hit by truck driver has compensation cut after judge says lack of helmet contributed to injuries
6
Councillor calls for anti-bike barriers to prevent “dangerous” cyclists “zooming across” foot tunnel
7
Town council says “restrictive” RideLondon sportive not wanted – because locals “can’t get out of their own road”
8
167 cyclists – and just four drivers – fined in police crackdown during Tour Down Under