The incident happened at around 7.25am (3.25pm UK time) in the city of Show Low during a state road race raising funds for a local school. The driver of a black Ford F-150 pick-up truck reportedly veered across several lanes on Highway 60, crashing into competitors before fleeing the scene.

Show Low Police Department confirmed the suspect, a 35-year-old man, had been shot about a mile away after officers attempted to apprehend him.

Six riders were taken to a nearby hospital, four in a critical condition and two are critical but stable. Three other riders were treated for minor injuries.

Witnesses report seeing helmets, shoes and broken bikes strewn across the street, while disturbing pictures from the scene show a wheel stuck in the grill of the truck.

Officials say 270 riders were competing in the various categories of the 58-mile race which started at 6.45am, however there has not yet been any word on the ages of the victims. Police said they were investigating alongside the Navajo County Sheriff's Office and the Arizona Department of Public Safety.

Tony Quinones was competing when he witnessed the driver move across three lanes towards the riders. "I don’t know who the heck this guy is, or what his motive was," Quinones told The New York Times. "But he intentionally did not go left into a parking lot. He drove his truck directly and intentionally into our group, and you could hear him accelerate until he hit that telephone pole."

Fellow riders then reportedly ran up to the vehicle and were shouting for the suspect to get out before he instead sped off. 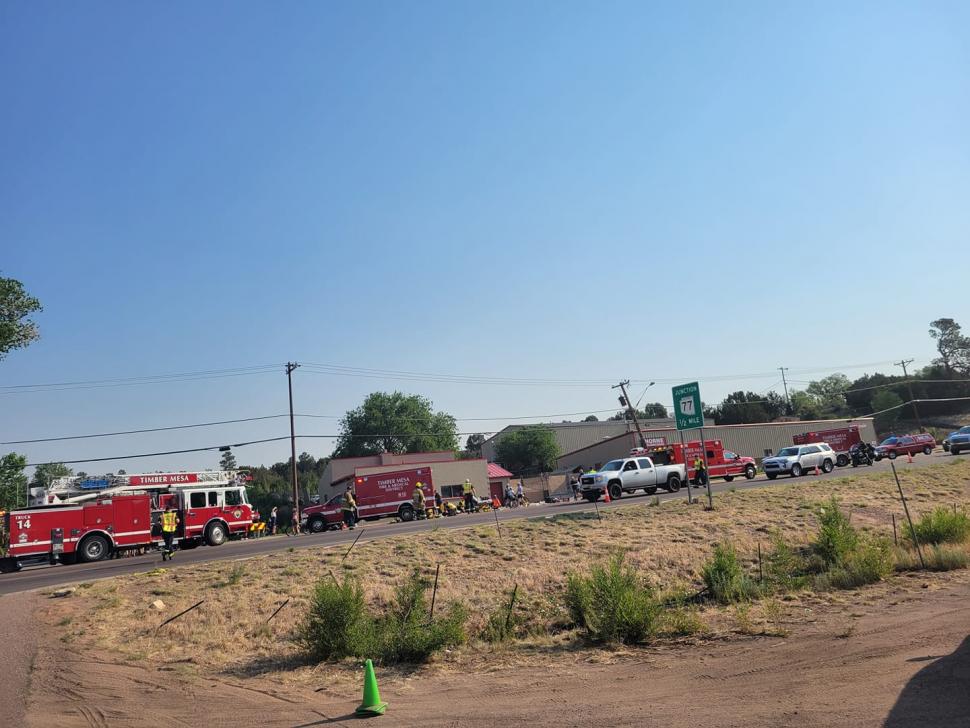 The suspect was pursued by police and shot a short time later behind an ACE Hardware in the city, several streets west of the crash site. His badly-damaged truck was photographed with a bullet hole in the driver's side window.

A spokesperson for Show Low Police Department said: "Thank you to all first responders who supported during this shocking incident. Also, thank you to all citizens who have generously offered their assistance. We know everyone is looking for more details on today's incident. Rest assured, we will share information as quickly as available. Please keep all the victims in your prayers."