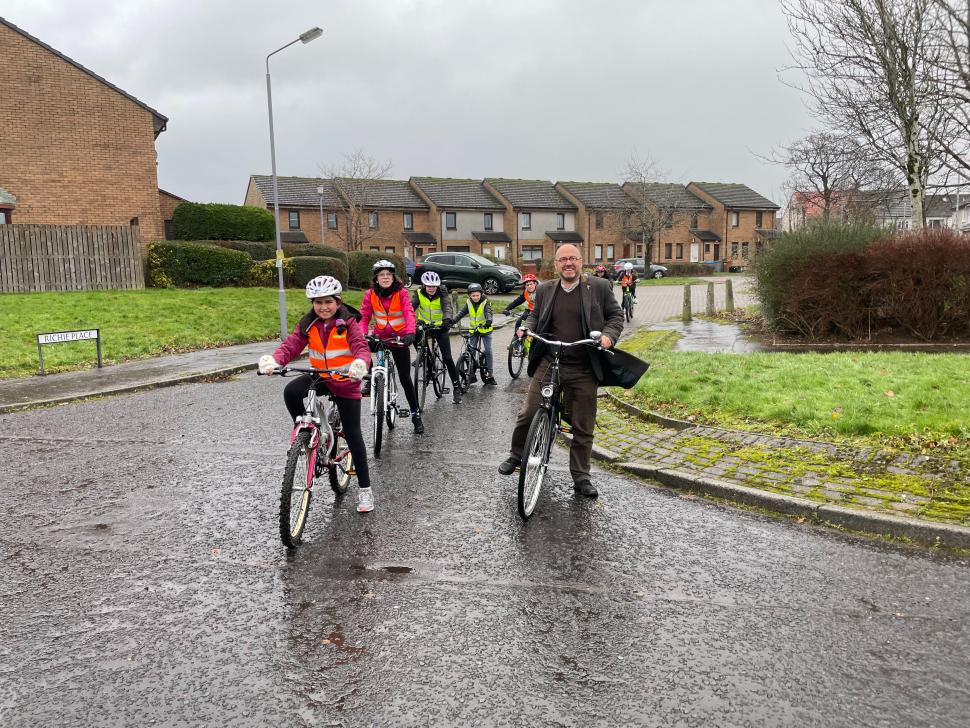 Scotland’s active travel minister, Patrick Harvie, has once again come under criticism for not wearing a cycle helmet

Harvie was appointed the Scottish Government’s minister for zero carbon buildings, active travel and tenants’ rights after the Green Party, for which he is MSP for Glasgow, entered a shared agenda agreement with the Scottish National Party in August.

However, opponents have been quick to seize on the fact that he cycles in everyday clothes rather than hi-viz clothing, and without a helmet, to try and score political points against him.

Their latest opportunity came on Friday when he attended a Bikeability session in East Renfrewshire and posed for pictures with schoolchildren undertaking cycle training, with the photos posted to Twitter by Transport Scotland.

Making sure all children leave school with the ability to ride a bike safely can help deliver an inclusive #ActiveNation.

Graham Simpson, the Scottish Conservatives transport spokesman, quoted in the Scottish Sun said: “If Patrick Harvie is going to tag along with children for a quick photo while they are doing Bikeability training, the least he could do is to abide by the same rules as them.

“He doesn’t have to wear a helmet but, quite frankly it’s no big deal to put one on if he is going out with a group of youngsters.

“Patrick needs to know when to stop posturing and be responsible.”

He was also criticised by Neil Greig of the charity IAM RoadSmart, who said: “Yet again Mr Harvie has failed to set the right example as a Scottish Government minister.

“A helmet is a vital piece of safety kit, especially for children as their skulls are not yet fully formed. Encouraging people to consider active travel options requires positive role models who practice what they preach.”

In September, after he was pictured at Glasgow Pride riding his bike bare-headed, Harvie said that wearing a cycle helmet was “not my style” and made him feel as though he were participating in an extreme sport.

And in response to the latest furore, a spokesman for Transport Scotland insisted on whether or not to wear a cycle helmet “is a matter of personal choice, not a requirement.”

He added: “The Highway Code recommends wearing a cycle helmet which conforms to current regulations, is the correct size and securely fastened, if cyclists choose to do so.”

Successive governments have rejected calls to make them compulsory, and campaigners say that the focus on the issue distracts from other ways in which the roads could be made safer for cyclists, with Chris Boardman, for example, telling road.cc in 2014: “I think the helmet issue is a massive red herring.

> Chris Boardman: “Helmets not even in top 10 of things that keep cycling safe”

“It’s not even in the top 10 of things you need to do to keep cycling safe or more widely, save the most lives,” he added.