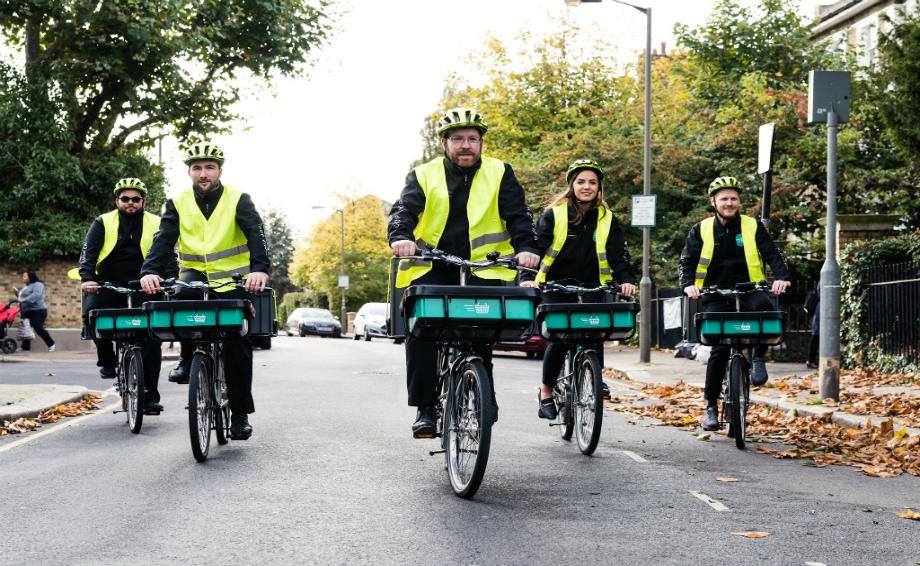 Closed store in Blackfriars will serve homes within a 3km radius, service may expand elsewhere in London and UK
by Simon_MacMichael

Sainsbury’s has revived its Chop Chop bicycle delivery service to meet “unprecedented demand” for online grocery orders, initially serving a large area of central London using a convenience store currently closed due to the coronavirus pandemic as a hub – and the retailer says it may roll out the service to other cities across the UK.

The store, on New Bridge Street which runs from Ludgate Circus to Blackfriars Bridge in the City of London, is one of a number of Sainsbury’s Local supermarkets serving commuters and office workers that have been temporarily closed as people switch to working from home during the crisis.

It is now being repurposed as a “dark supermarket” – one closed to the public, but where staff are able to pick products from shelves to fulfil online shoppers’ orders, a concept similar to the “dark kitchens” operated by companies such as Deliveroo, which provide food for delivery from leading foodservice brands from a centralised location such as an industrial estate.

Shoppers living within 3 kilometres of the Blackfriars store, which has been reconfigured to stock essential products and make it easier for staff to pick orders, will be able to choose up to 20 items from a list of 400 on the Chop Chop app and have their order delivered to their doorstep within an hour or so.

Other than a small part of Marylebone above Marble Arch, all of the area inside the London Inner Ring Road – shown in yellow on the map below – lies within 3 kilometres of the store, which is located where the red pin has been dropped. Sainsbury’s says it has tailored the list of items to reflect the needs of those staying at home, highlighting the benefits of the service to customers who are self-isolating or are unable to get to a store near where they live.

The grocer says it expects to be able to service 3,500 customers a week from the store, and is also looking to recruit new delivery riders. It says that should the service prove successful, it plans to introduce it in other parts of London as well as in other cities across the UK.

Sainsbury’s chief digital officer, Clodagh Moriarty, said: “Demand for home delivery has reached unprecedented levels and we are doing all we can to find new ways to serve more of our customers.

“We are pleased to use our Chop Chop service as an extension of our groceries online offer to enable our customers to quickly get food and other essential items delivered to their homes.

“While we are starting the trial in London we hope to be able to bring this fast delivery service to other cities in the UK very soon.”

First launched in south London in 2016, the Chop Chop delivery service previously operated within a diamond-shaped zone centred on Hyde Park and bounded by Ravenscourt Park in the west and St Paul’s Cathedral to the east, and Brent Cross in the north and St George’s Hospital, Tooting, in the south.

The service was suspended last month as the retailer focused on replenishing stores and its main online grocery business.

Sainsbury’s says that during the past fortnight it has booked more than 320,000 delivery slots for elderly, disabled and vulnerable customers, and that its online grocery offer can now handle 472,000 orders each week. Click-and-collect slots at stores have also risen from 41,000 to nearly 100,000 per week.