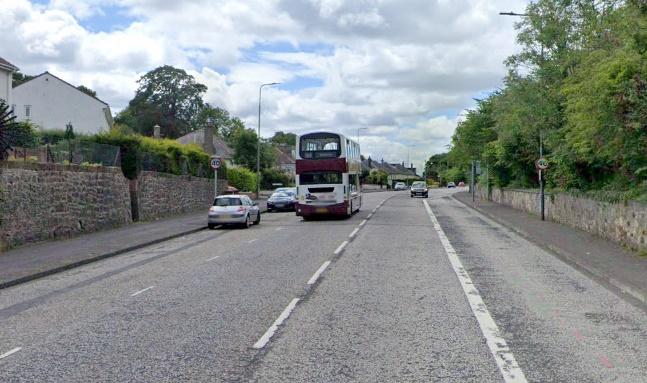 An Edinburgh residents group says the new pop-up lanes are at fault for a surge in accidents in the area, despite three of the five reported collisions involving drunk, distracted, or hit-and-run drivers
by Ryan Mallon

The past year has witnessed a sharp increase in the number of collisions involving motorists on Edinburgh’s Lanark Road – and some residents think that a recently installed cycle lane is to blame.

The protected bike lanes stretch for four miles along the Lanark Road, Longstone Road and Inglis Green Road in Edinburgh’s south-west and were introduced in 2021 as part of the city council’s Spaces for People project. Funded by Sustrans and constructed in response to the Covid-19 pandemic, the pop-up scheme aims to “create more space for people walking, wheeling and cycling” in the city.

The largest of the three roads covered by the scheme, the Lanark Road, has traditionally been viewed as particularly dangerous for cyclists. In January 2012 keen cyclist Andrew McNicoll died while riding to work on the road, following an incident involving a parked car and a lorry. His family campaigned for changes in parking and a reduction of the 40mph speed limit. As part of the Spaces for People initiative, the speed limits on all three roads have been reduced by 10mph.

Since it was first proposed, however, the scheme has come under fire from a group of local residents. In January last year, the residents group South West Edinburgh in Motion (SWEM) threatened Edinburgh City Council with legal action if construction began on the pop-up bike lanes.

SWEM criticised the lack of an independent safety audit and said that the scheme was carried out without consultation, despite the council’s claim that the bike lanes were introduced in response to feedback from locals worried about congestion and crowded paths during the pandemic.

This week SWEM’s chair Derryck Reid, a professor specialising in photonics at Heriot Watt University, blamed the new cycle lanes for the increase in collisions reported in the area. According to Reid, in 2019 and 2020 there were no incidents involving drivers, cyclists or pedestrians on the three roads in question.

"However, since the scheme was introduced by the council in 2021, residents have witnessed at least five collisions,” Reid told the Edinburgh Evening News. “These appear to be partly related to the design of the new scheme and ongoing poor road maintenance.”

Of the five collisions reported by Reid, three involved a driver “under the influence” who smashed into a vehicle in a floating parking space, knocking it across the cycle lane and pavement; a “hit and run” incident when a motorist struck another car in a floating parking space; and a driver who swerved to avoid a parked car and demolished a pedestrian refuge island in the process.

The other two anecdotal incidents included a cyclist falling off her bike due to the poor road surface and a cyclist colliding with a child.

Jason Rust, a Conservative councillor for Colinton/Fairmilehead, said: "There is clearly something amiss when the council's flagship policy which aims to make our roads safer, in fact results in local residents feeling less safe. I am very concerned about the number of recent collisions and near-misses and the apparent failure of the council's processes to take these into account."

However, the council’s transport convenor Lesley Macinnes criticised SWEM’s decision to focus on the new cycle lanes as the primary factor behind the apparent increase in crashes.

“We must all drive to the conditions of the road, and that this list of alleged incidents includes someone claimed to be driving under the influence and ‘hit and run’ damage shows that this has not necessarily been the case,” she said. “In fact, these events demonstrate just how much we need to protect the safety of people walking and cycling, on a route where one cyclist so tragically lost their life in recent years.

“We have been open from the outset that these measures were introduced on an emergency basis to provide a safe alternative to public transport at a time when this was being discouraged, as well as a different option to the crowded Union Canal and Water of Leith paths. Officers exercised due diligence in the implementation of this scheme, including the audits required for such urgent changes and consideration of previous collisions, as well as liaising with community members since.

“This is a clear bid to upend a carefully thought through policy aiming to protect public safety based on anecdotes, many of which have not been reported to police and, in some cases, involve criminal behaviour by drivers.”