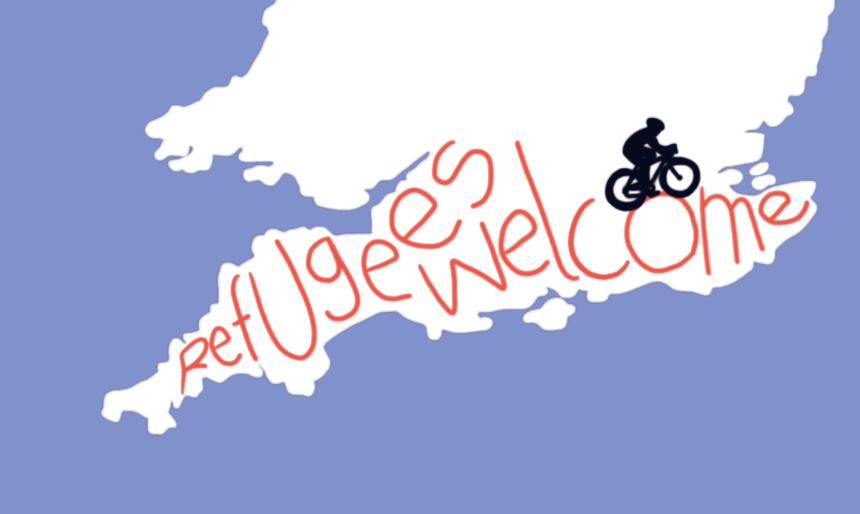 Georgie Cottle and David Charles are spelling out their message on 2,400km ride
by Simon_MacMichael

A pair of cyclists are creating what will be the world’s biggest ever piece of GPS art, spelling out the words “Refugees Welcome” across southern England.

Georgie Cottle, aged 26 and from Glasgow, and David Charles, 39 and from Bournemouth, have already broken the Guinness World Record, which stood at 761km, on their 2,400km journey across counties mostly bordering the English Channel.

They began their journey in Cornwall and will finish it in Dover, and so far their challenge – which goes by the name Spell It Out – has raised nearly £40,000 for charity, £7,000 of that through a fundraising page on Chooselove.org.

“The situation in Afghanistan was hitting the news just as we left,” said David, quoted on Kent Online.

“It’s certainly been uppermost in everyone’s minds while we’ve been riding.

“Everyone we meet seems to be aware of the horror of what’s happening and it’s been heartening to find that most people we’ve met show great compassion towards those forced to flee their homes.”

He continued: “Wiltshire has been the most generous county so far in terms of donations.

“It’d be unfair to pick out anyone in particular, but Laura and Jon at Bulstone Springs gave us full use of their glamping facilities, and also made us a homemade tiramisu.”

They surpassed the previous record while riding across the Somerset Levels, and David said:  “The mayor bought me a cup of tea and Georgie a Guinness and regaled us with the wonderful legends of Glastonbury.”

The two cyclists belong to a cycling group called Thighs of Steel, whose co-founders Harri Symes and Oli Kasteel-Hare devised the idea of spelling out the words, with Georgie using Komoot to plan the route.

“The south of England was the obvious place to plan the ride because Dover is the port of entry for many refugees, the route sends a very direct message of compassion, and because the letters fit nicely,” David said.

“There was an awful lot to consider, both in terms of cycling and logistical constraints such as easy access to overnight accommodation and railway stations.”

“The compensations are being able to eat as much as we like and, of course, the incredibly generous donations from people back home.”

On their fundraising page, they give more details of why they decided to undertake the ride, saying: “The British government is trying to make it almost impossible for refugees to claim asylum in the UK.

“Home Secretary Priti Patel's Nationality and Borders Bill is putting the UK in direct opposition to the 1951 Geneva Convention by shutting down even more legal routes to asylum in this country. Incredibly, it will also criminalise the courageous, life-saving work of the RNLI.

“That's why we're getting back on our bikes, cycling really really far and fundraising for grassroots organisations that offer refugees the welcome that our government withholds.”

They also each outlined their own personal reasons for taking on the challenge.

“I have been a keen bean cyclist since I was 19 and found myself cycling the length of America, sort of by accident,” Georgie said.

“Since then I have explored much of Scotland, Wales and New Zealand with my trusty Raleigh Capri (called ‘Sunny’).

“I first got involved volunteering with refugee and asylum seeker communities while studying Arabic in Jordan in 2016, at the height of the crisis. I learned one heck of a lot about what it meant to be a 'refugee', what people had to give up and why people were forced to flee.

“I now work with refugee and asylum seeker communities in Glasgow and it seems that people's journeys are being made ever more difficult by governments here in the UK and in Europe.

“Spell It Out is an incredible challenge that I am so privileged to be a part of. We are both really looking forward to getting on the road, and rallying as much support as possible for Choose Love!”

David said: “I've been going on ridiculously long bike rides for ten years now, including two stints on the London to Athens relay with Thighs of Steel.

“For me, bikes are the ultimate freedom machine, carrying me across continents, powered by nothing more than a croissant (or seven). I have also seen the transformational potential of bikes when put into the hands of refugees and asylum seekers, both here in the UK and in places like Calais, Athens, Chios and Samos.

“Bikes give us both independence and community and I'm proud to use mine in solidarity with those fleeing persecution, conflict and torture.

“I've been so lucky that I've been able to travel freely around the world, thanks only to the freak chance of being born in a politically stable, wealthy country. The sheer injustice that some human beings aren't allowed to cross borders makes me furious and anger is an energy, right? I hope so, because I've got an awful lot of cycling to do!

“We are far from powerless,” he added. “Please donate generously, make a noise and show the world that refugees are always welcome here.”