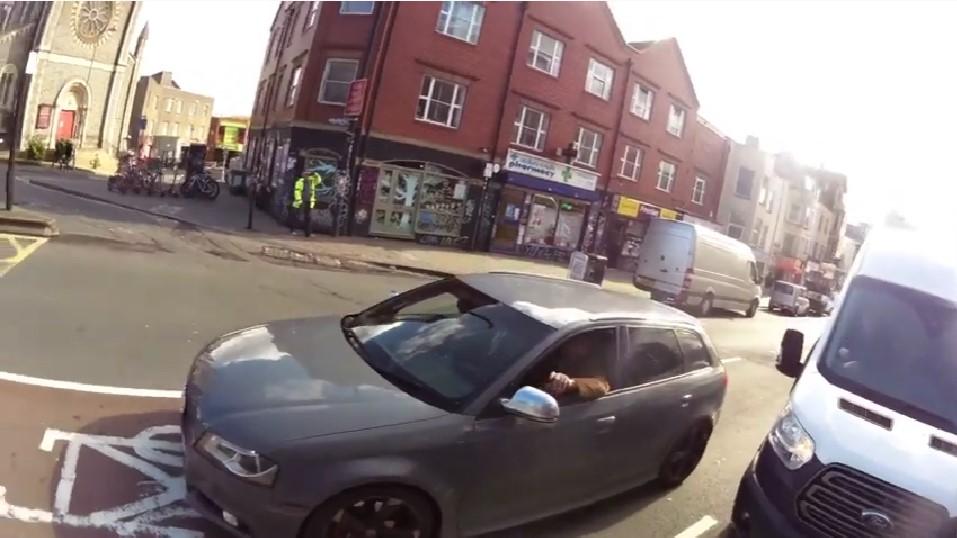 phone driver in Bristol - screenshot via Tom Bosanquet on YouTube

The Crown Prosecution Service (CPS) has dropped its case against a cyclist who was said to have delayed traffic by a handful of seconds as he used his helmet camera to film a driver illegally using a handheld mobile phone at the wheel in Bristol, as well as another motorist subsequently driving through a red light.

During the incident, which happened on 4 March, Tom Bosanquet spotted a driver using their mobile phone when he drew up alongside them at a set of traffic lights.

He told the motorist that using the phone at the wheel was an offence and dangerous, and while he did so an impatient van driver behind starting beeping his horn due to the delay which lasted all of 9 seconds.

The video of the incident(s), which led to Bosanquet himself being charged despite capturing two driving offences on camera

The van driver then accelerated through the red traffic light, and also failed to give the cyclist the minimum 1.5 metres of space stipulated in the Highway Code since January this year.

Despite capturing footage of those motoring offences which he intended to pass onto police, Mr Bosanquet was himself sent a Notice of Intended Prosecution by Avon & Somerset Police.

He was subsequently charged with inconsiderate cycling contrary to section 29 of the Road Traffic act 1988, an offence that on conviction can lead to a fine of up to £1,000.

The 43-year-old, whose legal fees are being covered by Cycling UK’s Cyclists’ Defence Fund, had been due to appear at North Somerset Magistrates Court today.

However, the CPS decided to drop the prosecution following a review that concluded that it was Not in the Public Interest to proceed.

Mr Bosanquet, who lives in Bristol, said that the threat of prosecution that had been hanging over him in recent months had been a “stressful” experience.

“This case has been a long, drawn-out and stressful process, and as the first run-in I’ve ever had with the law, I’ve felt shaken by it,” he said. “The attempted prosecution was heavy-handed and inappropriate, something borne out by the case now being dropped.

“I am relieved now to move on from this episode, wiser but undaunted in my desire for the ongoing safety of all vulnerable road users,” he continued.

“Throughout I’ve been humbled by the support shown to me both by individuals and groups such as Bristol Cycling Campaign, and particularly grateful to Cycling UK’s Cyclists’ Defence Fund which was there to take my side and support me,” Mr Bosanquet added.

Sarah Mitchell, chief executive of Cycling UK, said: “It’s somewhat ironic that Mr Bosanquet was prosecuted in the incident when he was using a helmet camera to catch footage with the intention of supporting the police [by collecting] evidence of bad behaviour on our roads.

“This is something that police forces across the country have expressed they welcome from the public, and any negligible delay to traffic was caused in part by this.”

She added: “Cycling UK believes the police should never have referred the case to the Crown Prosecution Service, so we’re pleased it’s now been dropped. Going to court would undoubtedly have been a waste of resources.”

According to Cycling UK, the Cyclists’ Defence Fund, which is financed solely through donations, “helps fight significant legal cases involving cyclists, especially those which could set important precedents for the future, and could affect the safety of all cyclists. Its remit has expanded over time to cover all aspects of cycling and the law.”