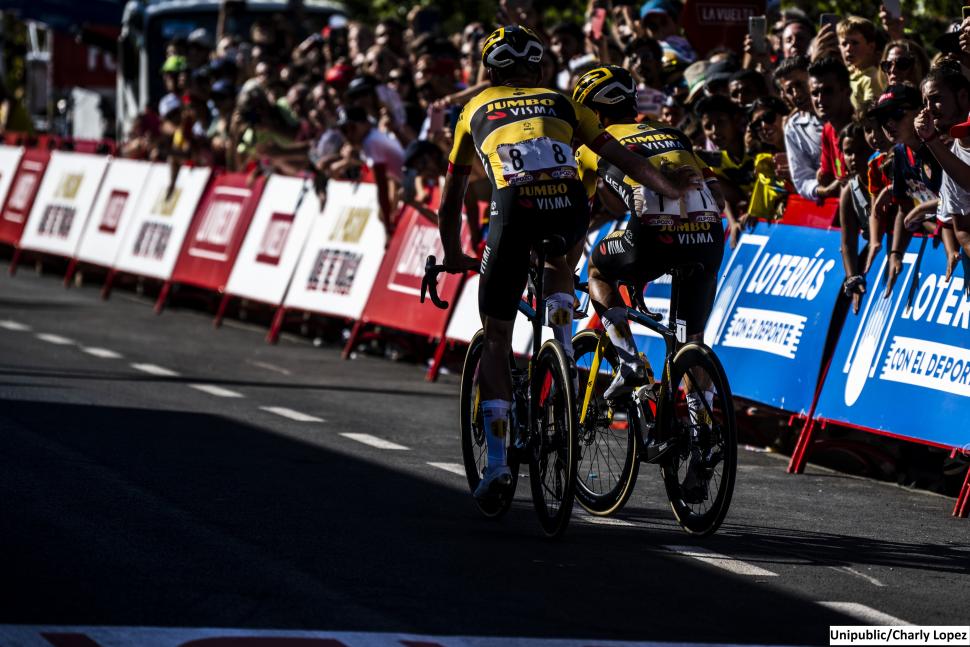 Londoner Wright said he was "disappointed" to read the "unfair" accusation — Bahrain Victorious "stand by" their rider, say statement has led to "vitriol and hate"...
by Dan Alexander

In a bizarre statement, which has been heavily criticised by many, Jumbo-Visma and Primož Roglič insinuated that the crash which saw an end to the Slovenian's quest for a fourth straight Vuelta a España win was caused by British rider Fred Wright.

In the long-read article published on the team's website midway through yesterday's stage, where Wright ultimately finished second behind Mads Pedersen, a frustrated Roglič said the incident was "not okay", "shouldn't happen" and occurred when Wright "came from behind and rode the handlebars out of my hands before I knew it".

💬 "After the crash, it took me time to straighten things out. My conclusion is that the way this crash happened is unacceptable. This is not the way I want the sport to continue and I want to make that clear."

Team CEO, Richard Plugge, added comment about riders needing to "brake and use your brains" and that he is "glad Primož is speaking out, looking in the mirror and naming the behaviour of riders as well".

Unsurprisingly, the statement received plenty of attention even before yesterday's stage had finished, a discussion which continued overnight. It has been heavily criticised by many in the cycling world — fans, reporters, riders alike — and appears even stranger considering Wright's widely-reported lack of blame for the incident.

Let’s hope that Roglic is fine, after that nasty crash pic.twitter.com/eh25ZRKJPC #LaVuelta22

Despite the contact being largely obscured by other riders on the TV pictures, still photos from the roadside suggest, at most, brief contact between the pair as both launched their sprint, Wright penned-in against the barriers and holding his line.

One crash too many for Primoz Roglic, though there is hope for safer racing - https://t.co/RpuS7huyQt pic.twitter.com/XHNgR6yN9k

Wright, who gave a typically sporting interview immediately after the incident — wishing Roglič the best after the "racing incident" — last night said he was "pretty disappointed" to read the "unfair" accusations.

"It was really hard to read, and I'm pretty disappointed. I think it's unfair, the team and I have looked at the footage again tonight, and I honestly don't believe I did anything wrong — it was just a racing incident," Wright said.

"Primož is an amazing bike rider. He was so on the up and challenging for the red jersey in Madrid. It was a huge loss for the race and I totally understand he must be very disappointed. I'm sure he'll be smashing races again soon. He was so impressive three days ago, I'm gutted for him.

"There have been some pretty nasty comments, but I really appreciate all the positive messages I've had."

Roglič and Jumbo-Visma's comments have attracted criticism from many, with the CEO of the Uno-X Pro Cycling Team saying it is "hard to understand the reason for throwing this young lad under the bus. Not clear and obvious at all and absolutely not the way to do it amongst colleagues and teams".

The sentiment of Jens Haugland's message was echoed by Wright's own Bahrain Victorious team who said they "stand by their rider" and the "footage supports" the fact it was a "racing incident". The team released a statement:

Just before the stage finished, and while the riders were all still on the road, Team Jumbo-Visma released a statement on their website regarding the crash in the finishing straight on stage 16 which led to Primož Roglič's withdrawal from the race.

In it, the triple Vuelta winner and the team's managing director insinuate heavily that our rider, Fred Wright, was to blame for the incident, and for the Slovenian's injuries.

Team Bahrain Victorious stand by Fred. It is our belief that this was a racing incident. Unfortunately crashes are a part of our sport and this isn't the first, nor will it be the last, even though riders do their best to avoid them.The race footage supports this: our rider does not deviate from his racing line before the incident.

We also believe that if a team has certain feelings about an incident on the road, the place to take those up is with the commissaires after the stage rather than a statement online some days later.

It is predictable that releasing a statement such as this leads to vitriol and hate being expressed towards a fellow member of the peloton, which we find most disappointing. We sincerely hope that actions encouraging such behaviour online will cease to happen. Fred is kind, generous, and incredibly talented. He does not deserve the comments or sentiments that have been directed towards him in recent days.

British sprinter Dan McLay, currently at the race with Arkéa Samsic, weighed in on the one-sided debate, saying Jumbo-Visma's allegation is "a load of shit" and we can only hope it's "a badly-timed April Fools' joke".

"Only thing Fred could have done to avoid that is jump over the barriers into the crowd," he said.

Today is the penultimate stage of the race, taking the riders 181km from Moralzarzal to Puerto de Navacerrada over three first-category climbs. It is the final chance for any of the GC challengers to overthrow Remco Evenepoel from his two-minute lead. Tomorrow will be a processional sprint stage in Madrid, with a first new winner of the red jersey since 2018.