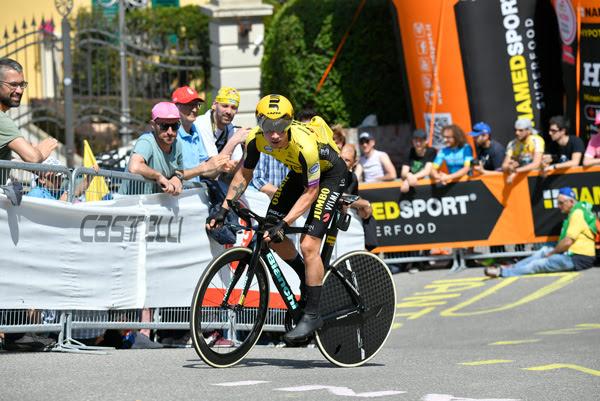 Primoz Roglic has abandoned the Criterium du Dauphiné ahead of today’s concluding stage due to injuries he sustained in a crash yesterday – a day that also saw team-mate Steven Kruijswijk, third overall at last year’s Tour de France, crash out of the race with a dislocated shoulder.

Since the UCI WorldTour resumed at the start of this month, Roglic, aged 30, has been the in-form rider among those with designs on the yellow jersey at the Tour de France and last week took the overall victory at the Tour de l’Ain.

His Jumbo-Visma team has been dominant at the Criterium du Dauphiné, with Wout Van Aert winning Wednesday’s opening stage and Roglic victorious on Thursday’s second stage.

However, the Slovenian’s departure from the race and Kruijswijk’s crash yesterday on a gravel descent described as “a disgrace” by team-mate Tom Dumoulin casts a shadow over what until now had been a near-perfect build-up to the Tour de France Grand Depart in Nice the weekend after next.

Confirming that Roglic would play no further part in the race, Jumbo Visma said on Twitter this morning: “As a result of his crash yesterday, Primoz Roglic - leader in the GC and points classification – won’t start in the ultimate stage today. The evolution of his injuries will determine the plans for the upcoming races.”

As a result of his crash yesterday, Primoz Roglic - leader in the GC and points classification - won’t start in the ultimate stage today. The evolution of his injuries will determine the plans for the upcoming races. Speedy recovery, @rogla 🤞 pic.twitter.com/xvam2hlX69

Meanwhile, Kruijswijk said that a decision would be made next week on whether he will be fit enough to ride the Tour de France.

“The next couple of days have to show how thinks look like,” he said. “We have to wait and see what the specialists are going to say and how my feeling on the bike will be. Next week we will decide if I can start the Tour.”

As a result of Roglic’s abandonment, the overall lead now passes to Groupama-FDJ’s Thibaut Pinot, who has an advantage of 10 seconds over Guillaume Martin of Cofidis.

Bahrain Merida’s Mikel Landa is a further two seconds back in third place, with Daniel Martinez of EF Pro Cycling lying in fourth position on the same time.

Today’s final stage starts and finishes in Megève and covers 153.5 kilometres with an uphill finish and no fewer than eight categorised climbs, including the Hors-Categorie Col de Romme and the Category 1 Col de la Colombière.