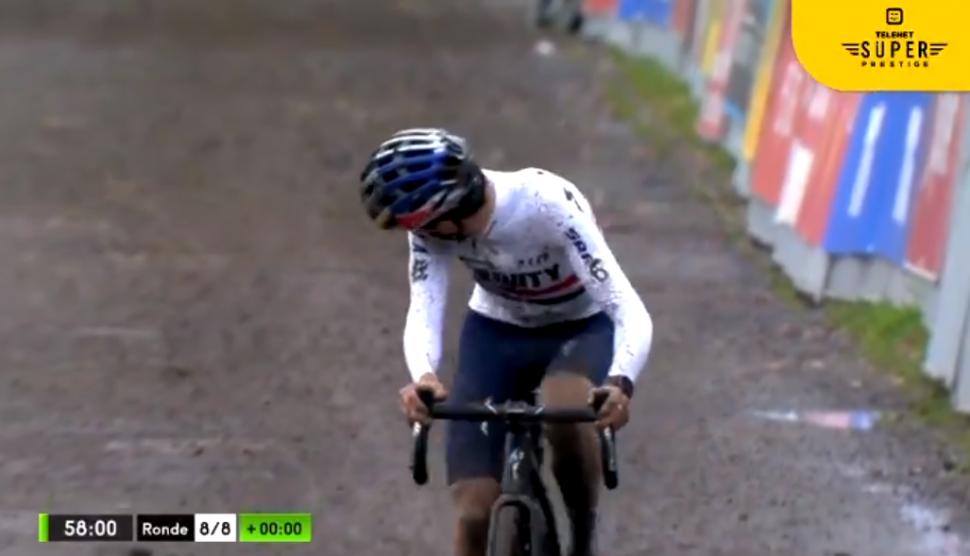 “Today, I think I came of age,” says 21 year old after beating elite international field in Belgium
by Simon_MacMichael

Tom Pidcock, runner-up to Mathieu van der Poel in the UCI Cyclo-cross World Championships in Switzerland in February, left the world champion in his wake today at the Superprestige Gavere as he took his biggest career win to date in the discipline.

It’s the first major international victory at elite level for the Trinity Racing rider, who is the reigning British champion and has won the rainbow jersey at junior and under-23 levels.

Attacking on his own in the first lap, the 21-year-old from West Yorkshire was subsequently joined by van der Poel and the Belgian rider, Toon Aerts.

He proved strongest in the second half of the race, dropping first Aerts, then the world champion, as he rode away to victory.

“To be honest, I don’t know what to say,” Pidcock admitted afterwards. “Today, I think I came of age.

“The past years I’ve been bad at the starts so I’ve been working on them and trying to improve there. I know if I can do a good first lap and not already be in the red, then I’ll have a lot more for the finish. I’ve been training hard and now it pays off.”

“Every race I’m getting stronger,” said Pidcock, who before today had finished 17th in the World Cup in Tabor, Czech Republic, and ninth at the Superprestige Boom in his opening races of the season.

“After Tabor, the important thing that I told myself was that no one will remember this if you get a result later on, so maybe everyone can forget about that now.”

Reflecting on today’s race, he said: “Honestly, the part where I thought I was best were the technical parts," he said.

“Also, the second part of the climb was good for me. The first part in the mud was not so good but then when it got less steep I was stronger.”

A hugely talented rider across a range of disciplines – he won the Under-23 Giro d’Italia this year, as well as the e-MTB and under-23 titles at the UCI Mountain Bike World Championships in October – Pidcock has signed for Ineos Grenadiers to race on the road in 2021.

First, however, he will race the rest of the cyclo-cross season, starting with next weekend’s round of the World Cup in Namur.

He said: “I’ve been training specifically for the climbing races. I’ve trained at Beringen this week and will go next week as well.”