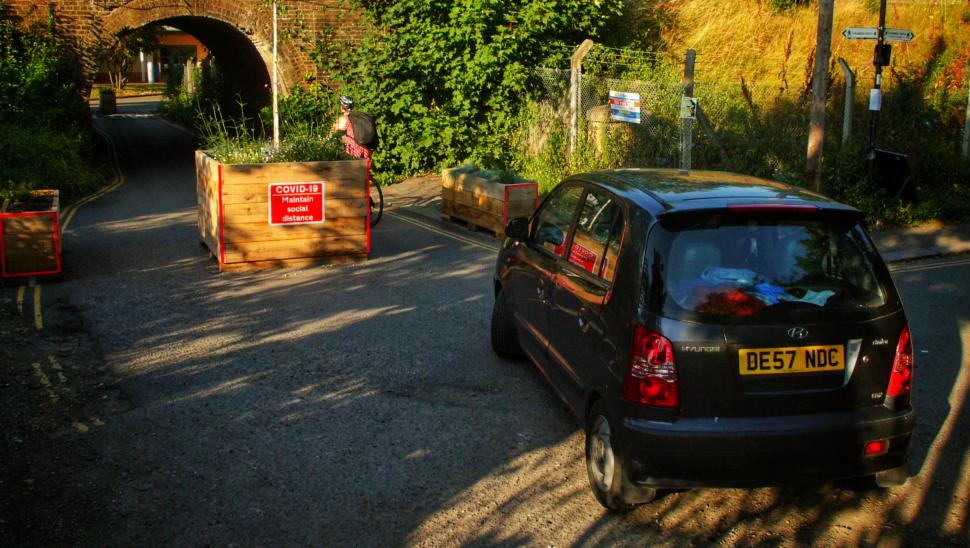 Shocking video from Lewisham shows motorists driving onto pavement to get round planters blocking road; council to install bollards tomorrow
by Simon_MacMichael

Drivers are continuing to ignore pop-up bike lanes as well as road closures introduced as emergency measures to encourage active travel and protect vulnerable road users – with footage emerging today of motorists in Lewisham driving onto the pavement to get round planters deployed to close a road to through traffic. The council has swiftly responded by saying it will replace the planters with bollards.

Sent to the BBC by a resident after seeing last night’s piece - https://t.co/b3SbCo2cSr

The footage was posted to Twitter by Tom Edwards of BBC London News by a local resident who had seen his report on another Low Traffic Neighbourhood (LTN) elsewhere in South London, this one in Brixton.

This evening, Lewisham Councillor Sophie McGeever, the portfolio holder for transport and the environment, said there was “no excuse” for the drivers' behaviour and that bollards, as well as additional signage, would be installed tomorrow.

There is no excuse for this.

A number of councils across London and elsewhere have been introducing LTNs as a short-term measure during the COVID-19 crisis, although it is possible that some will become permanent.

Yet, as the video from Lewisham shows, many motorists are simply ignoring them where they can, simply by going round them.

As Simon Munk, infrastructure campaigner at the London Cycling Campaign (LCC), pointed out on Twitter, a guide to implementing LTNs drawn up last year by LCC and Living Streets recommends that planters, or other means of creating modal filters, be spaced 1.5 metres apart including from buildings either side of the road to prevent drivers trying to get round them.

Close to the river Thames in Chiswick, some motorists went even further by moving small planters that blocked the road leading under a railway bridge to a sports centre. Hounslow Council’s response? It put an even bigger planter in place, complete with tree (see main picture above).

It didn't take long for some numpty to shove this out of place. Maybe they wanted to save a few seconds driving to the gym? @LBofHounslow pic.twitter.com/GOvmRtnmaT

It's not just modal filters that are being ignored by motorists. As we reported last week, one Liverpool cyclist described a temporary cycle lane in Toxteth as a “pop-up car park” after discovering dozens of vehicles parked half in the bike lane, half on the pavement.

And earlier this month, video was posted to Twitter of cars parked on a London cycleway in Pimlico despite Transport for London having just added wands to provide a degree of separation that had previously been missing.

Has temporary infrastructure been put in place where you live, and what has the reaction from motorists been? Are they respecting it or ignoring it?