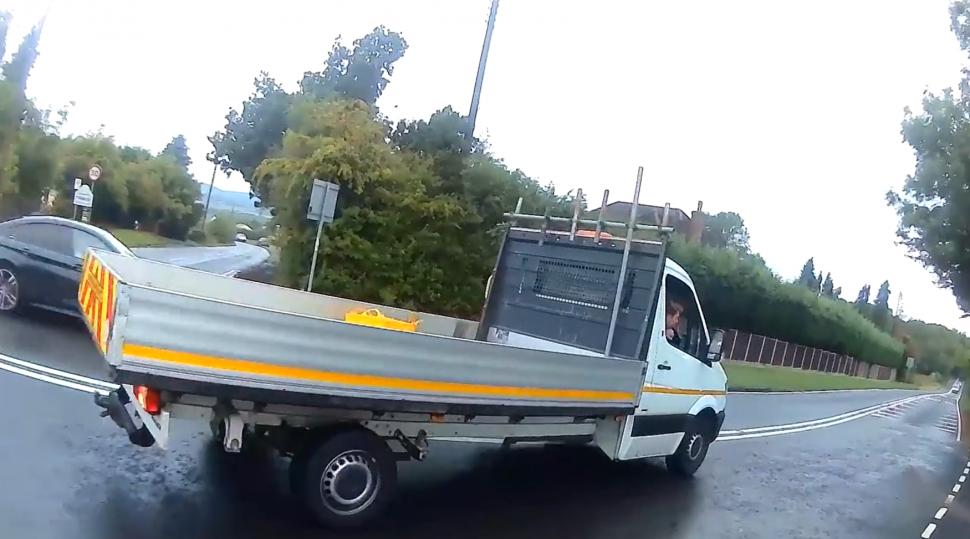 Near Miss of the Day 831: MGIF driver reverses over white lines into traffic to confront cyclist

Today’s Near Miss of the Day features the kind of standard, run-of-the-mill ‘Must Get In Front’ overtake – where an impatient driver just has to pass the person on the bike, despite being mere yards away from a swiftly approaching junction – experienced by cyclists up and down the country.

However, when this particular motorist was called out for his needless (and potentially dangerous) pass, he decided to confront the cyclist… by reversing back down the middle of the road towards oncoming traffic.

In the above clip, filmed in the Birmingham suburb of Bartley Green and uploaded to Twitter by Northfield Cyclist, the motorist – driving a Highway Maintenance vehicle – overtakes the cyclist before braking almost immediately to stop at a junction, where he turns right.

> Near Miss of the Day 830: MGIF driver does close pass on three cyclists ... and immediately turns right

Seemingly displeased with this feedback, the motorist then stops before reversing in the middle of the road, over the double white lines – as drivers approach from both sides, with one forced to slowly navigate their way by – to exchange a few (not so) pleasantries with the cyclist.

Can't wait to pass safely but plenty of time for a chat as usual.

West Midlands Police, which claims to be the “first force in the country to proactively target ‘close pass’ drivers who endanger riders”, responded to the clip posted on Twitter, and urged the cyclist to report the incident to their online portal.