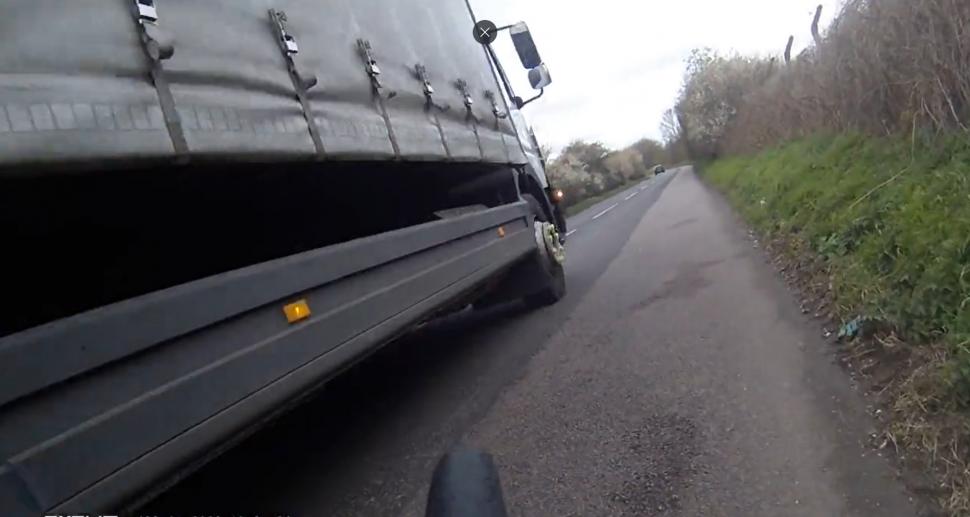 Near Miss of the Day 744 revisited: Cyclist “fuming” after lorry driver who nearly hit him head-on avoids prosecution

Our regular series featuring close passes from around the country - today it's Oxfordshire...
by Ryan Mallon

“Fuming” – that’s the reaction of a cyclist who had to swerve sharply to avoid being hit head-on by a lorry driver in Oxfordshire who was overtaking a tractor, but who did not face prosecution since Thames Valley Police believed there was “insufficient evidence to provide a realistic prospect of conviction.”

Posting footage of the incident to Twitter the day after it happened in April, Ruddell Kingston, who tweets as @MuscleClinicUK, said: “The increase in fatalities on #oxfordshire roads has been widely reported in recent months. Which is what this kind of #dangerousdriving and total disregard for life shouldn’t go unpunished.”

We featured the video in our Near Miss of the Day series at the time, highlighting comments from people responding to the video online, including ones describing it as a “near death experience” and “an absolute shocker.”

The cyclist involved in the in incident on the B480 in Chalgrove, Russell Kingston, has now provided an update on what happened with the case – and it isn’t good news.

While Thames Valley Police originally issued a Notice of Intended Prosecution against the lorry driver, he was not prosecuted.

slowing him down, then said 'the cyclist could have assisted by stopping and moving over' - which I did to save my life! @ThamesVP had an opportunity to do the right thing and set an example here but took the easy way out! Not even an awareness course! #closepass

Kingston said that he had been told that the driver had said that “he didn’t see me when he started the overtake, blamed his auto gearbox for slowing him down, and then said ‘the cyclist could have assisted by stopping and moving over’ – which I did to save my life!”

He added that Thames Valley Police “had an opportunity to do the right thing and set an example here but took the easy way out. Not even an awareness course!”

Already done that. But was told that scheme dosent apply to this matter!.. Then they went on to say the 6mths needed to bring it to proceedings has now lapsed so they have 'run out or time' 🤷🏻‍♂️

Replying to Kingston’s latest tweets today, South Yorkshire Police’s Sheffield North West Neighbourhood Policing Team said: “It sounds as though they have sent an NIP and interviewed the driver in some form so they've done the hard work.  Victim’s right of review might be the way to go.  Worth contacting the force and asking them to review that decision?”

However, Kingston replied: “Already done that. But was told that scheme doesn’t apply to this matter! Then they went on to say the 6 months needed to bring it to proceedings has now lapsed so they have ‘run out or time.’

Our original article, published in April, appears below.

This extremely close call – which forced the cyclist to take evasive action as a lorry driver barrelled towards him from the opposite direction while overtaking a tractor – has sparked an outcry online, as Twitter users describe the incident as a “near death experience” and “an absolute shocker”.

The increase in fatalities of cyclists on #oxfordshire roads has been widely reported in recent months. Which is why this kind of #dangerousdriving and total disregard for life shouldn't go unpunished. FN67LHM B480 Chalgrove today! @TheOxfordMail @Cycliq @roadcc #closepass pic.twitter.com/BDRr4JAs58

The cyclist who posted the video, Russell Kingston, a soigneur for British Cycling, said the lorry driver’s shocking overtake showed “a total disregard for life”.

Referencing the recent deaths of Ellen Moilanen and Dr Ling Felce, who were both killed after being struck by lorries while riding their bikes in Oxfordshire this year, Kingston said that “this kind of dangerous driving… shouldn’t go unpunished”.

> Near Miss of the Day 719: Oncoming van driver ignores cyclist — company promises to talk with driver

Kingston has reported the footage to the police, later tweeting that he was “still glad to be alive”.

Uploaded yesterday, the video has been viewed over 13,000 times on Twitter.