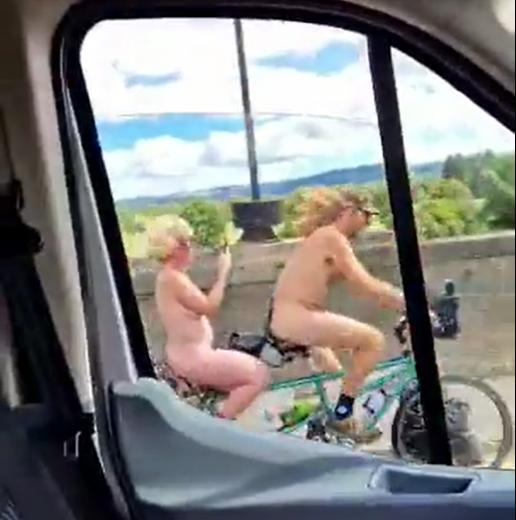 A pair of naked tandem cyclists who earlier this month were swerved at twice by a driver in Scotland as they undertook a charity ride from John O’Groats to Land’s End have arrived safely at their final destination in Cornwall.

As previously reported on road.cc, a 32-year-old man was charged with an alleged road traffic offence in connection with the incident near Bridge of Earn, Perthshire.

Colin Unsworth, aged 52, and Sadie Tan, 31, were 250 miles into their 837-mile end-to-end journey in which they aimed to raise money for the mental health charity Mind and climate emergency charity Rewilding Britain when the incident happened on 4 July.

Despite the “terrifying” incident, in which they were both knocked to the ground, they carried on with their journey – albeit not being naked all the time, stripping off for photos at various landmarks including Edinburgh Castle en route – and arrived at Land’s End on Monday, reports Cornwall Live.

Mr Unsworth, who comes from Lancashire said of their arrival there: “It was great, everybody had their cameras out and straight away people cottoned on to what we had just done.

“The reaction was great, people were kind of coming out of the building to take pictures of us. There was people there from all over the world so I think they were all bemused to see this funny, British way of celebrating the end of the pandemic.”

Speaking of the reception they received on their way – that driver in Perthshire apart – he said: “The majority of people will pip their horns and wave or laugh at us. We get people who overtake us, turn around and pull into the side of the road to take a video.

“I think most people can see we are not doing any harm, and we are doing something that's quite brave.

“As we were coming up outside Edinburgh Castle, there was a coachload of Japanese tourists and we could just hear the uproar and the laughter. They were all absolutely rolling around laughing, trying to get their cameras out.”

The couple belong to a group called the Free Wilders, and two fellow members who are undertaking a naked tandem ride in the opposite direction from Land’s End to John O’Groats were spotted in Bristol last week.

Neil Cox and Hannah Teoh stopped in the West of England city for a quick drink at The Apple last Wednesday, reports the Bristol Post.

“I have always being undressed where I could,” Mr Cox said.  “My current girlfriend is very supportive and over the last seven years I started to embrace it. In Hannah's case, she isn’t a naturist but her attitude is why are people bothered about a body?

“She just wanted the bike ride and it is actually very enjoyable to be naked on a ride. On a wider sense, there is a sense of freedom around it.

“I get mental health benefits from it too – it destresses me. People have a lot of different reasons,” he added.

Please note that due to charges being laid against the driver in connection with the incident in Perthshire, comments are closed on this story.