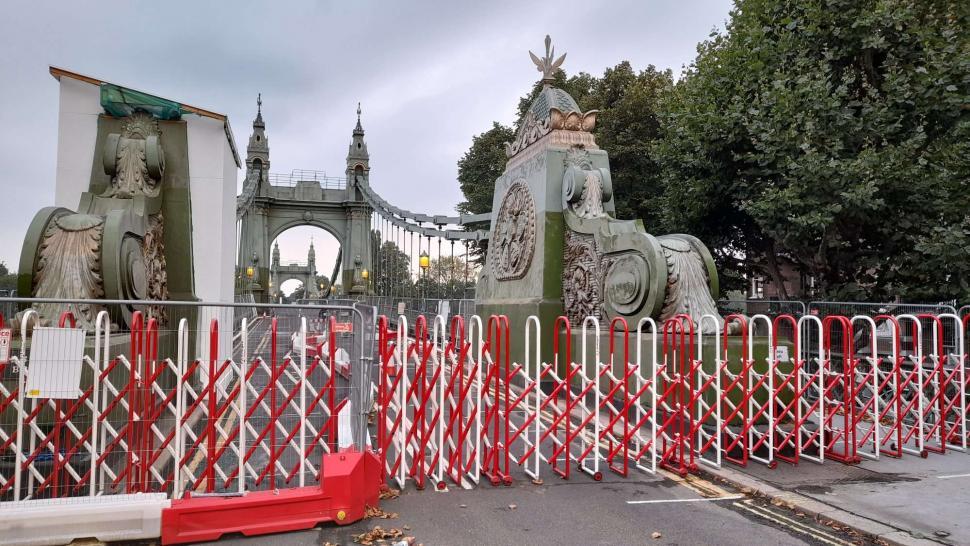 A new report on London’s Hammersmith Bridge says that is remains impossible to fully assess the damage to the Victorian structure’s pedestals, and that further checks will be needed before it can be reopened to cyclists and pedestrians.

The bridge was closed to motor vehicles in April 2019 due to structural concerns, initially remaining open to public on foot or on bikes, enabling them to cross the Thames from Hammersmith to Barnes, which is in the London Borough of Richmond upon Thames.

However, during last August’s heatwave it was discovered that the existing cracks on the bridge’s pedestal had deteriorated further.

Hammersmith & Fulham Council (H&F), which is responsible for the bridge, ordered its immediate closure including to cyclist and pedestrians as well as river traffic below it and with diversions put in place on the towpath on either bank.

Now, a report commissioned by the council from the civil engineers Mott McDonald has recommended that the bridge remain completely closed until works to stabilise the structure have been carried out, reports MyLondon.

A summary of the report said: “The most recent MM report provides a good deal of evidence to suggest that the north-east pedestal is likely to be stable.

“However, that does not provide the degree of certainty required to reintroduce pedestrians in the short term because the necessary degree of independent checking has not been applied.”

The remedial works are estimated at £40 million, out of a total repair cost of £141 million, resulting in a political row over who should foot the bill between H&F, Richmond Council, the Department for Transport (DfT) and Transport for London.

Last month, two reports commissioned by the DfT – one from consultants Aecom, the other from fracture mechanics expert Professor Norman Fleck of Cambridge University – recommend that it would be safe to reopen the bridge to people on foot or on bike without major works having to be carried out.

The Mott McDonald report, however, insists that the bridge cannot be open until the damage to the pedestals has been fully assessed.

“H&F must bear in mind that the safety of the bridge depends on one brittle cast iron pedestal known to contain cracks which have shown movement, one which does not, and two others, still with paint needing removal, but known to contain some cracks that are of unknown condition,” it said.

“Those two pedestals must be investigated fully before consideration is given to any changes although unknowns will remain even then.

“It is obvious, and intuitive, to any member of the public that even with detailed knowledge of all the pedestals ... the case is clearly for no use of the bridge without remedial works,” the report added.

H&F’s cabinet member for the environment, Councillor Wesley Harcourt, said: “As we have suggested since closing the bridge on public safety grounds in August, there is a clear route towards the bridge being re-opened for pedestrians and cyclists within a year provided the necessary programme of stabilisation works is agreed.”

The closure of the bridge means that other than the footbridge, only accessible by flights of stairs, alongside Barnes Railway Bridge there is no Thames crossing open between Chiswick Bridge in the west and Putney Bridge in the east – a distance of more than five miles.

A ferry service for cyclists and pedestrians is planned, but there is still no word of when it might come into operation.