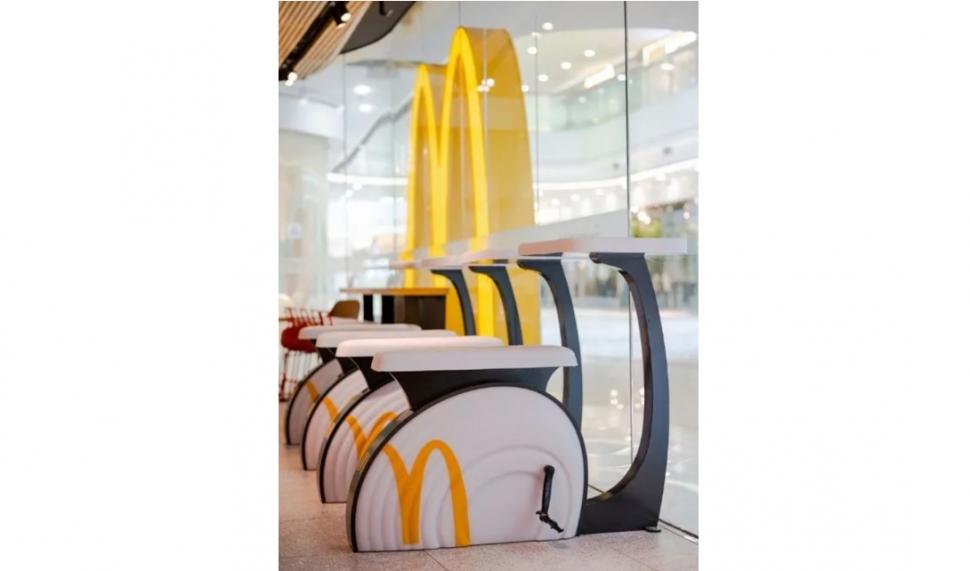 TikTok video of woman pedalling as she munched a burger has gone viral in recent days – and they are an actual thing, says Snopes.com
by Simon_MacMichael

Exercise bikes in a branch of fast food chain McDonald’s in China that featured in a TikTok video that went viral in recent days are real according to fact-checking website Snopes.com – but the rationale behind them is not the one that that has been assumed by commenters on social media and media outlets around the world.

Mail Online, among others, reported that the bikes featured in the video, which shows a woman munching a burger as she pedals away, had been installed so “Health-conscious diners can try to balance their calories while eating junk food.”

The website claimed that “ MailOnline research found you have to cycle up to 27 miles per Big Mac meal.”

But Snopes.com, rating the video as a ‘Mixture’ of truth and falsehood, says that claims the exercise bikes have been installed to help customers burn off their meals is incorrect.

Instead, it says, “This is more of a green initiative, as opposed to a fitness one, as the primary purpose of these bikes is to generate power to charge mobile devices.”

The video has been viewed more than 35 million times on TikTok and widely shared elsewhere on social media.

The exercise bikes have been installed as a trial in two branches of the Golden Arches chain in China – one of them in Shanghai, where the video was shot – McDonald’s has confirmed.

But as for the reason they had been made available to customers, the US-based fast food chain told Snopes.com:

The Green Charging Bike is an in-restaurant experience, currently being tested at two locations in China, that is designed to inspire more green behaviours as customers enjoy their McDonald’s favorites. The bike generates electricity to power everyday devices like mobile phones and is a part of McDonald’s China’s “Upcycle for Good” project, an initiative focused on creating products with plastic parts from recycled materials. The Jieyang Wanda Restaurant in Guangdong Province opened in September 2021 and was the first restaurant with the bike, followed by the New Hualian Restaurant location in Shanghai, as seen in the video. McDonald’s China will continue to evaluate feedback from customers as it considers the expansion of the bikes in other cities.

In summary, Snopes.com said: “The viral video is real, and truly shows stationary bikes that were installed at select locations in China. The primary purpose of these bikes, however, is to generate electricity to power mobile devices.”

We at road.cc fell for the supposed reason behind the bikes being to burn off calories, too.

As our colleague Dan pointed out when he reported on the exercise bikes on the road.cc live blog on Monday:

There's something very Black Mirror about this ... in the dystopian Netflix series’ capitalism-criticising ‘15 Million Merits’ episode, fictional contestants earned credits by spinning on a stationary bike which could, if you had enough, be spent on entering a talent show for a shot at escaping the hamster-wheel lifestyle ... see where I'm going ...

No talent show, but keep pedalling and you might have earned another bite of that Big Mac. Black Mirror tangent, addressed. Onto my second thought, where can one buy such an appealing Maccy D's home trainer?