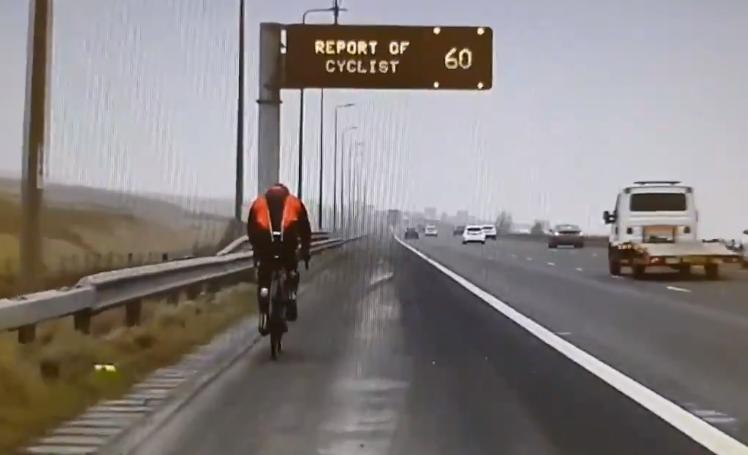 Incident happened on M62 in West Yorkshire
by Simon_MacMichael

A police officer in Yorkshire has posted footage to Twitter of a cyclist riding on a motorway … and passing under an electronic sign warning of the presence of a cyclist on the motorway.

A police officer in Yorkshire has posted footage to Twitter of a cyclist riding on a motorway … and passing under an electronic sign warning of the presence of a cyclist on the motorway.

The clip, which shows the rider pedalling along the hard shoulder of the M62, was shared on the social network by PC Martin Willis of West Yorkshire Police.

There are many types of conveyances that are prohibited from using the motorway. Bicycles are one of them! pic.twitter.com/67wqVGalR2

PC Willis said: “There are many types of conveyances that are prohibited from using the motorway. Bicycles are one of them!”

It is unclear how the cyclist – who is riding in a straight line, at a steady speed, and is wearing hi-viz gear – came to be on the motorway, nor what action if any was taken against him.

Inevitably, the post sparked the usual anti-cyclist comments in the replies – but there was also a response from one cyclist who explained how poor signage had led him onto a motorway.

I've ended up on a motorway in error before.

2nd left is an emergency slip road. The gate is left propped open.

And 3am, so you can't see the gate or the sign at that angle. pic.twitter.com/OdliKVQfBK

Over the years we’ve reported on numerous cases of cyclists ending up on motorways, whether through ignoring signage or inadvertently being guided there by sat-nav apps.

Last year, during the first national lockdown, a cyclist who strayed onto the M58 near Skelmersdale in Lancashire because of a sat-nav error was fined after a van driver crashed while trying to avoid him.

While no-one was injured, police said that the cyclist himself was very lucky he had not been “wiped out.”

One of the most high-profile instances of cyclists found riding on a motorway came the day before the opening ceremony of the Glasgow 2014 Commonwealth Games, when four cyclists from the Sri Lanka national team were spotted cycling on the M74 near the exit for Motherwell and Hamilton.