Low Traffic Neighbourhood in Ealing ripped out 'during school run'

"It’s truly embarrassing to live in Ealing right now."...
by Will Bolton

A Low Traffic Neighbourhood being trialled in Ealing has been shut down by the council.

The council claim the closing of a nearby road for a period of two months means they were left with no option other than to shut down LTN21.

It also said however that 'the implementation of low traffic neighbourhoods has caused significant division within local communities'.

Shortly after Ealing Council announced its decision, a local school posted a warning on its website urging children and parents to take 'extra care' while travelling.

The road due for closure, Swyncombe Avenue, links Hounslow and Ealing on the southern border of the LTN21 but is closing to eastbound traffic from Monday.

Social media users said that the removal of the LTN began on Friday 'during the school run'.

This is how much @EalingCouncil care about kids safety.

They rip out the LTN during the school run and a kid on a bike has to dodge a crane.

The council says ultimately it wants people living in LTNs to be the ones to have the final say on the trial schemes.

This will be done through a 'Controlled Parking Zone' style consultation on each LTN in the borough, 'keeping schemes that work and are supported, and removing those that do not'.

"The decision on LTN 21 has been brought forward because of the closure of Swyncombe Avenue and we will be ending the trial this weekend.

“Remaining LTNs will be subject to a CPZ style consultation, with a vote for local people on whether they think the LTNs will work in their neighbourhoods.

“I’ve pledged that the council I lead will be open, transparent and inclusive. That means being honest about what works and what doesn’t.

“This decision is about giving local people control over change in their neighbourhoods. Our commitment to tackling the climate emergency and enabling active travel and cycling remains unchanged, but we know we must take people with us.”

My letter as @EalingLD Leader to the new Leader of #Ealing Council in response to the news of the removal of LTN21, to demand all of the LTNs are removed as well as a similar scheme to an LTN in Fishers Lane, Southfield #Chiswick. pic.twitter.com/tczOFLDaMB

Following the announcement, a local school in the area, Fielding Primary urged children to take extra care when walking home. 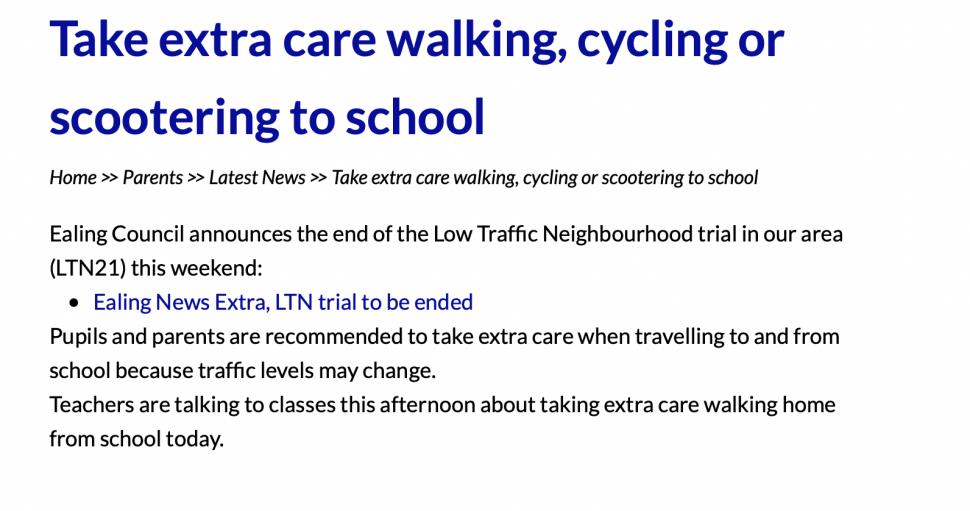 Posting on its website, the school warned:  "Pupils and parents are recommended to take extra care when travelling to and from school because traffic levels may change.

"Teachers are talking to classes this afternoon about taking extra care walking home from school today."