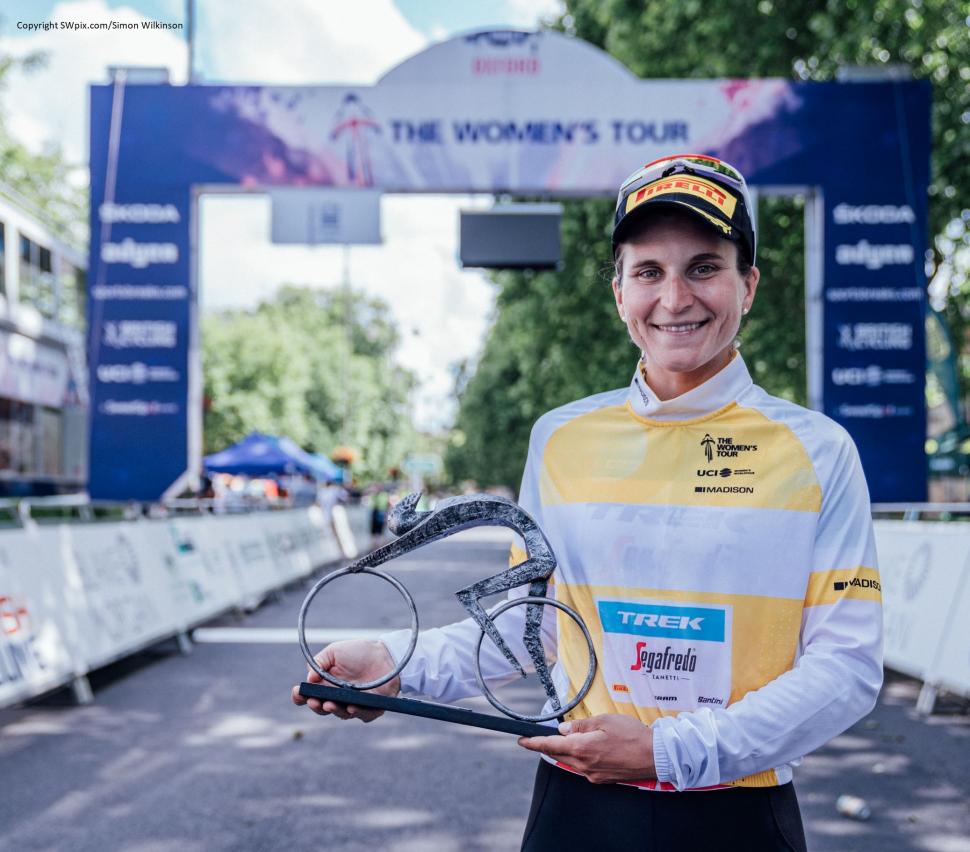 Trek-Segafredo’s Elisa Longo Borghini has won The Women’s Tour by just 1 second following a thrilling conclusion to the race on its final stage today in Oxfordshire.

When the peloton rolled out of the market town of Chipping Norton this morning, the Italian national champion, wearing the tricolore jersey, was level on time with Grace Brown of FDJ Nouvelle-Aquitaine Futuroscope, who led the overall on countback.

The Australian appeared to have tightened her grip on the general classification during today’s sixth and final stage when she increased her lead over the Italian by 3 seconds after picking up a bonus at the intermediate sprint.

But in the final sprint on St Giles in Oxford, Longo Borghini finished third behind Lorena Weibes of Team DSM, who picked up her third stage victory of the week, and the 4 bonus seconds the Trek-Segafredo rider secured were enough to clinch the overall title.

“We decided to go for the intermediate sprint, and I was 4th so I was like okay, that’s the 2nd place and that’s it,” she said afterwards.

“But then all my teammates kept my morale up, and said we try at the finish and we’ll do the lead-out for you. I was really doubting, but when you see such a team that is motivated and they are really believing in you, just want to give them back everything.

“In the end, they all did a perfect job and Audrey (Cordon-Ragot) led me into the final 500m. I know that in corners I am good, and I let some riders in front of me to take their draft, and I made my own sprint.

“Really, In the end it, it was just perfect teamwork. I am really thankful to all my teammates and staff here working for me. Trek-Segafredo again showed how much teamwork is worth in cycling.

“We knew the finale was pretty technical and we studied it this morning with (director) Ina Teutenberg. This is also why in the end I think they all believed I could do it because of the corners. But again, I have to give big thanks to my team Trek-Segafredo.

“I didn’t know where Grace was, I was just focused on taking the bonus seconds at the finish,” she continued.

“I had practiced sprinting with my boyfriend Jacopo (Mosca) for town signs. We stopped for a bit and were joking a few days ago that we regretted this after the sprint in Stage 3 when I was third. I think we will be back sprinting for town signs again soon.

“Lizzie [Deignan] sent me a nice message yesterday and said remember my sprint in 2019,” the Italian added.

“That was such a close battle again with Kasia Niewiadoma and she made it, so yeah it was nice to hear from her about that.”