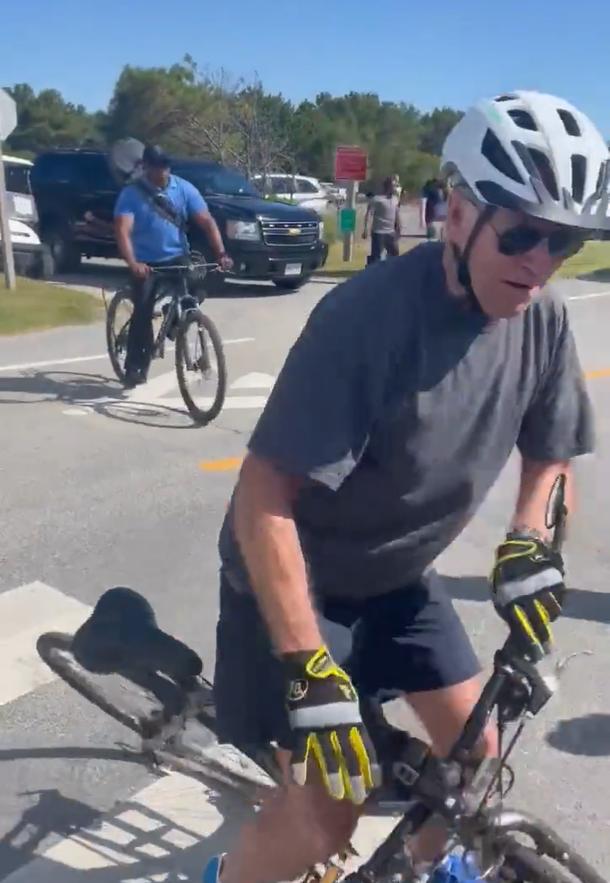 “This could be his GC over”: Joe Biden falls off bike after getting foot caught in toe straps

We’ve all been there, Joe. This morning the President of the United States proved that it doesn’t matter whether you’re a racer, a commuter cyclist, a toddler learning to ride, or one of the most powerful people in the world; all of us, at some point, will fall off our bikes while coming to a stop.

Biden was out for a spin with his wife Dr Jill Biden (and their obligatory peloton of security personnel) near their home in Rehoboth Beach, Delaware, where the couple are celebrating their 45th wedding anniversary, when the President stopped to greet a crowd wishing him “Happy Father’s Day”.

Unfortunately, the 79-year-old fell victim to the dreaded toe strap, which kept a firm grip of his right foot, causing him to unceremoniously topple to the ground.

Asked how he was after regaining his feet, the President responded that he was “good” and blamed the “toe cages” for his fall. Surrounded by reporters, Biden quickly turned his attention to current developments concerning gun legislation, before hopping back on his bike to catch up with his wife.

Despite the President’s quick recovery, as Patrick Broe from the Lanterne Rouge podcast meticulously analysed in the below video, there remains some concern over whether the President will be able to sustain his GC challenge after the unfortunate fall…

Detailed analysis below of the Joe Biden bike crash from a self-appointed professional cycling expert pic.twitter.com/kGBKATTwFL

Biden isn’t the first president to fall off their bike while in office. In 2005, George W Bush – a keen mountain biker – crashed while riding in the grounds of a Scottish hotel hosting the G8 summit.

Unlike Biden, Dubya was said to be travelling at “a pretty good speed” at the time of his fall and suffered a minor ankle injury, as well as scrapes on his hands and arms.

Predictably, the President’s tumble has already been used as a point scoring exercise for right-wing political commentators in the United States (as well as a certain pro-Brexit non-MP), who have obviously never experienced the fear of approaching a set of traffic lights while trying out a new pair of clipless pedals.

Right-wing attempts to disparage Biden’s bike riding are nothing new, of course. Fox News has continuously criticised the President for cycling in his home state of Delaware, and in March Eric Trump blasted Biden for “riding a beach cruiser around the place” while war rages in Ukraine.