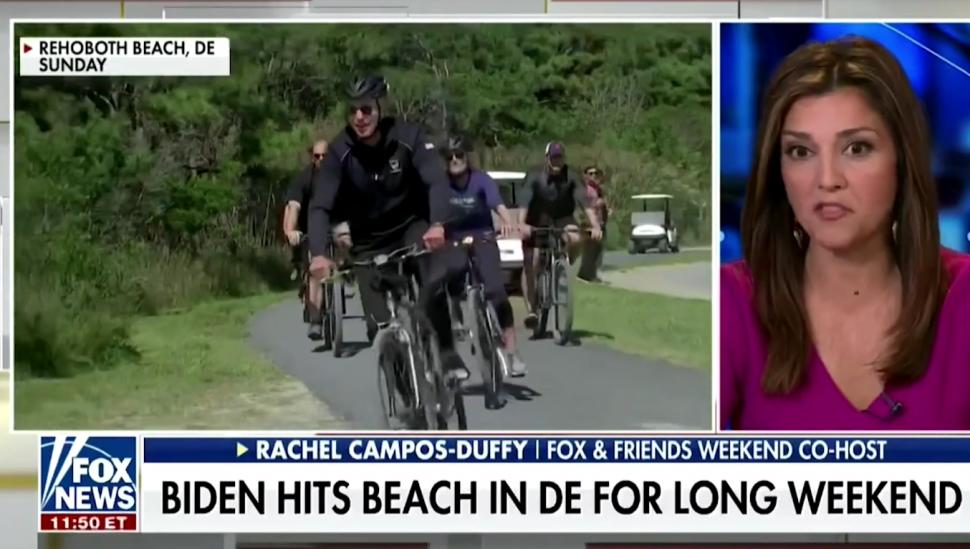 “Cycling is the new golf” is hardly a new cliché – but no-one seems to have told a Fox News pundit who questioned President Joe Biden’s fitness for office after he was filmed (not for the first time) riding a bicycle on a break in Delaware while making no reference to the hundreds of visits to golf courses his predecessor President Donald Trump made during his four years in the White House.

In an interview with Fox News’ Harris Faulkner, former reality TV star Rachel Campos-Duffy, whose husband is a former Republican Congressman, claimed that footage of Biden on a bike ride with his wife Jill on Sunday at Rehoboth Beach, Delaware – their home state – somehow proved that he is unable to fulfil the demands of his office.

“Being the leader of the free world has to be the most demanding job in the whole world and he simply does not have the mental or physical stamina to do this job,” she insisted.

“That is why his handlers and his wife, who by the way look increasingly like visiting angels, have to schedule in these senior breaks for him so he can take naps and go for bike rides because he can't concentrate on the job the way he should,” Mrs Campos-Duffy continued.

“I mean, just compare it to President Donald Trump,” she said, ignoring the more than 300 times that Trump is believed to have visited golf courses while in office, and in a reference to criticism of Biden not holding official press conferences, insisted that the former president “worked these long, long hours and had impromptu hour-long pressers with the media.”

It has been estimated that Trump spent nearly one in three of his days as president at one or more of the resorts he owns, and while Rehoboth Beach where Biden spent the weekend lies 120 miles east of Washington DC, his predecessor’s favoured destination was his Mar-a-Lago resort in Florida, 1,000 miles from the White House.

His golfing trips were heavily criticised by many media outlets not only because of the perception that he was not devoting his full energies to his office, but also because of the associated Security Service costs, which are believed to have run to tens of millions of dollars.

Trump himself – who in 1989 and 1990 sponsored a multi-day international race in the eastern US modestly called the Tour de Trump – was dismissive of Biden’s penchant for cycling in the run-up to the 2020 Presidential Election.

Previously, he had repeatedly attempted to belittle former Secretary of State John Kerry who in 2015 broke his leg when he crashed while riding his bike on the Grand Colombière in the French Alps while on a break from talks in Switzerland regarding Iran’s nuclear capability.

Later that year Trump – who as president would, in 2018, rip up the Iran deal Kerry negotiated –  said of Kerry, “He goes into a bicycle race at 73 or 74 years old. He falls, breaks his leg. I don’t want him on a bicycle during nuclear negotiations.”

Kerry was in fact 71 at the time and was not riding in a race.

Trump added: “I swear to you, I will never enter a bicycle race if I’m president.”

Golf, however, turned out to be a different matter entirely.

1
Singapore to ban cyclists from riding in groups longer than 5 bike lengths
2
Near Miss of the Day 648: Quick-thinking cyclist grabs 4x4’s registration number after driver pulls out on him for second time in a week
3
The Blincc Hex 360 degree reflector tape for bikes has smashed its Kickstarter goal in just two days
4
Five cool things coming soon from Wilier, Camelbak, Topeak, Effetto and Pactimo
5
Driver kills cyclist after running him over three times
6
Road pricing “inevitable,” MPs are told as switch to electric vehicles hits tax revenues
7
Near Miss of the Day 646: Cyclist wonders whether police force “just supports aggressive and inconsiderate driving”
8
“The justice system has let my beloved Lorraine down,” says widower after speeding driver who killed his wife given suspended sentence