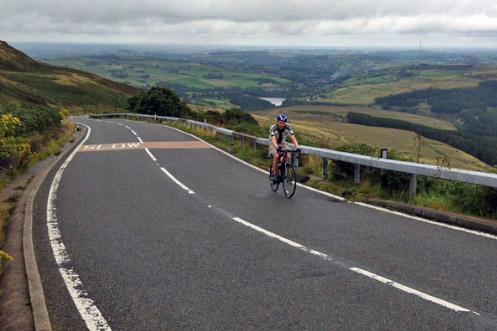 The race organiser was also accused of saying that women don't "make tea at TTs anymore" during a verbal discussion about the event's cash prize allocation, but claims he was misquoted...
by Jack Sexty

An organiser of a West Yorkshire hill climb has been accused of saying that women "don't contribute to the sport" during a discussion about prize money at the event, when a competitor took issue with the cash sum for the overall top three being greater than the prize for the first three female finishers. Richard Haigh says he was "misquoted", and that the prize list was published prior to the event so anyone who was unhappy "didn’t then need to enter".

Last weekend the organiser of Holme Moss Hill Climb replied “because they don’t contribute anything to the sport” when asked why the women’s prizes weren’t equal to the men’s!

If you have second please sign the following petition to stop this happeninghttps://t.co/UrY4H6cXXH

At the weekend, Nikola Matthews said she emailed Holme Valley Wheelers - the organisers of the Holme Moss Hill Climb - about the prize pot before the event, which took place on Saturday 11th October. Originally the prize pot deemed that the 'first fastest' competitor would win £45, the second fastest would win £35, and the third fastest would win £28; while the first female would get £40, the second fastest £30, and the third fastest £20.

Ms Matthews added on Instagram: "Pye Nest Day Nursery offered to donate the difference in prize money (for the Holme Moss Hill Climb event) to make it equal. I’m really thankful they did this. However the organiser refused to accept it saying that he did not feel it was appropriate and women didn’t deserve equal prize money because they don’t contribute to the sport. He then tried to justify it with some bollox about women not making tea at TTs anymore."

She also told road.cc: "It's not about the money. It's about the allocation of the money and what it stands for."

Since the allegation was made and shared on social media, a petition to make equal prize money mandatory at all Cycling Time Trial events has been widely shared again, and signed by Chris Boardman amongst others.

Haigh, the Holme Moss Hill Climb organiser who was accused of making the controversial comments, sent an email to all competitors today defending himself and the event against the allegations. He said:

"The regrettable part of the event occurred when all of the hard work was finished and I should have been in a position to go home and relax. I became aware that a post had been made on social media (something that I don’t take part in) from a female competitor, unhappy with the prize money, as in her opinion it was not equal for men and women.

"When deciding on the prize list, I had spoken to someone at CTT to see if they had guidance on this point and was given to understand that they did not and this was a matter for the organiser.

"Prior to the event I had published a prize list (good practice) on the CTT website, as I am aware that opinions differ when it comes to allocating prize money, whether this should be in proportion to the numbers in the category entering the event or equal across gender. I felt this was the best way to be fair and transparent, and anyone unhappy with the prize list didn’t then need to enter, if they felt strongly about it.

"A competitor then emailed me regarding the matter to which I replied, explaining my rationale behind the prize list.

"I was also the start timekeeper for the event and as I prepared to carry out this vital role, I was again approached by a competitor, to discuss the issue and I believe this conversation has been misquoted on social media.

“As anyone who has ever assisted in organising activities and events in amateur sport will know, this is all done on a voluntary basis, at a personal cost out of love of the sport and wishing to put something back in.

"Volunteering in grass roots sport had long caused concern as most of it is done by older people in the sport and therefore is not sustainable, something that has been highlighted by Covid and is seen in the many cancelled events on both CTT and BC platforms and something that needs to change of the sport is to continue.

"It would be nice to think that people’s efforts and energies could be chanelled in this direction rather than negativity on social media."

After the unequal prize pot at Catford CC's famous hill climb caused much controversy this time last year, the organisers eventually redistributed it. Originally £300 was offered for the overall winner and just £75 for first female, which was then changed to £100 each for the first male and female winners respectively.