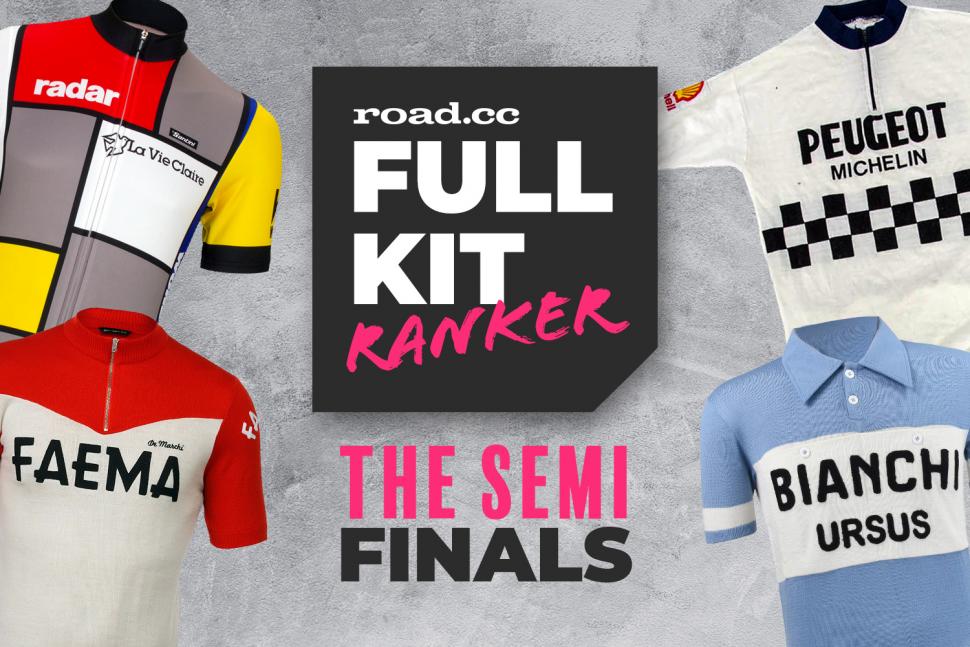 Full Kit Ranker semi finals: your chance to vote for the greatest cycling jersey of all time

A couple of surprise results in the quarter finals have led to our final four... which classic jerseys are you sending through to the grand final?
by Jack Sexty

*Voting is now closed for the semi-finals, see ya in the grand final!*

So here we are, it's the road.cc Full Kit Ranker semi finals... will your favourite cycling jersey ever ever make it through to our grand final? Best get voting to make sure it has the best chance of being crowned the greatest of all time! As in the previous rounds, get yourselves familiar with our four remaining classic jerseys before making your decision, then cast a vote in both polls. Voting closes at 4pm on Friday, after which we'll gather the final scores then the grand final will commence on Saturday afternoon.

Without further ado, let's get voting! We've got a feeling the elimination of Mapei in the quarter finals will be unpopular with a lot of you, as it was edged out by literally tens of votes out of almost 3,000 by the classic Faemino–Faema strip donned by Eddy Merckx in the build up to his Tour de France and Giro d'Italia domination in 1970. It's up against the 1985 La Vie Claire classic as worn by Bernard Hinault, that was (perhaps surprisingly to some of you) a clear favourite over the uber-cool Molteni jersey worn by than man Merckx in 1972. What's it going to be, La Vie Claire or Faema? This decision is a tough one!

You can buy a La Vie Claire replica jersey here, and a Faema replica here The classic Bianchi jersey worn by Fausto Coppi - one of the most famous cyclists of all time - triumphed convincingly in our poll over US Postal's Nike jersey from 2004... worn by another of the world's most famous cyclists, but not necessarily for the right reasons! There was a much closer poll in our match-up between the minimal yet iconic Peugeot-Shell-Michelin strip donned by Stephen Roche, and the loud pop art-inspired Z-Tommaso jersey worn by Greg Lemond, with Peugeot pulling through on 59%. 1950's Italian vintage cool, or 80's French pizzazz? The choice is all yours...

You can buy a Bianchi replica jersey here, and a 70's-era Peugeot-BP replica here. You can still find some original Peugeot-Shell-Michelin jerseys on eBay.

As with the first round and quarter finals, make sure you cast votes for all four match-ups and discuss with your fellow Full Kit Rankers. Feel free to share your favourite jerseys that missed our initial shortlist in the comments too... we might even have enough for another tournament!

And again, cheers to the Full-Kit W*nkers page for inspiring the name of this epic contest - part of Twitter folklore.