Applications set to open for first 50,000 Fix Your Bike vouchers worth £50 each – link to map of 1,239 participating bike shops – Halfords and Evans taking part
by Simon_MacMichael

Updated: Following yesterday evening's announcement of the Fix Your Bike scheme going live and initial confusion of when people might be able to start registering for a voucher, detailed guidance from the Department for Transport issued this morning confirms that it will open at 2345 hours this evening, Tuesday 28 July, at this link. Our original article appears below.

The government’s long-awaited Fix Your Bike scheme goes live in England at midnight tonight (Monday) with two major retailers: Halfords' and Evans Cycles announcing that they are taking part although the majority of shops in the scheme would seem to be independent bike shops. Fix Your Bike vouchers are worth £50 each to help get a long-neglected bike back on the road.

Head here to register for a voucher – please note that the registration page for the public will open some time after midnight tonight, according to the government, but at the time of writing (last update midnight) the link still directs to the trade registration page.

In total, 500,000 vouchers will be released at a total cost of £25 million, part of the £250 million announced for active travel by transport secretary Grant Shapps back in May, with applications for the first 50,000 opening this evening.

Bike shops across the country have been encouraged to take part – you can find the full list of bike repairers across England that are taking part on on the repairer locations page of the Fix Your Bike microsite. If the numbers on the map are up to date there are currently 1,239 participating bikes shops fairly evenly spread across England with the level of concentration in bigger cities that you'd expect – 298 in Greater London, 156 in the West Midlands; and around 300 across the major northern cities. Halfords and Evans have 350 and 52 stores respectively taking part so the bulk of participating bike shops are independents or local chains.

Not surprisingly though the two biggest bike retailers on the high street Halfords and Evans are enthusiastic supporters of the scheme.

In a statement released to coincide with the scheme's launch Halfords  committed to working with the Government and has become the nation’s largest approved cycling service providers for the Fix your Bike Voucher Scheme.

Halfords says it will have thousands of slots

Want to 'Fix Your Bike' at Halfords or Evans?
Here's what you need to know 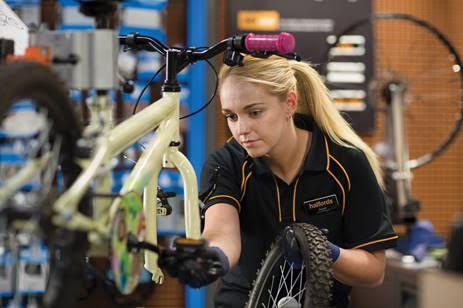 Originally the government announced that Fix Your Bike vouchers would be available to the public by the end of June, but have been delayed – not least, according to cycling minister Chris Heaton-Harris, due to waiting for bike repairers to have sufficient capacity to deal with demand.

“By encouraging people to get their old bikes out of the back of the shed fixed and safe to ride, the scheme will help more people choose cycling over public transport as a convenient way to travel, for example when going to the shops or seeing friends,” says a statement from the government.

“Due to overwhelming demand for cycle shops’ services during the pandemic, vouchers will be released in batches in order to help manage capacity across participating stores.” The statement continues.

“The first 50,000 will be available just before midnight tonight on a first come first served basis to those who register online.”

The government added that it will “work closely with industry during this first pilot launch to monitor its success and adapt the scheme as necessary before rolling it out more widely.”

It was announced last month, when the scheme opened to bike repairers wanting to participate in the scheme, that vouchers would be available via a microsite hosted on the Energy Saving Trust website, with the government outlining at the time how it would work.

The government’s announcement that the scheme is opening to applications this evening was accompanied by a brief summary of how it will work, as follows:

A list of eligible repairs are provided to both customers and bike shops and mechanics as part of the Terms and Conditions of the scheme.

People can use their voucher, with a limit of two vouchers per household, at any participating repair shop, with the voucher remaining valid for two months following registration

Repair costs will vary but £50 will typically cover the cost of a standard service and the replacement of a basic component such as an inner tube or cable. Where a bike needs additional components then a customer contribution is likely to be needed

Children’s bikes are also covered by the scheme.

The launch of the vouchers ties in with the government’s wish for more people to switch to active travel for everyday trips including commuting as England continues to emerge from lockdown.

With social distancing continuing to severely restrict capacity on public transport, another key motivation to get more people cycling is to avoid gridlocked roads by discouraging those with a car to use that for their trips to work.

But as we’ve said before, the delay in the launch of the scheme, which has attracted plenty of attention from people wanting to get long-neglected bikes back on the road, together with traffic now returning to levels seen pre-lockdown – and during the school summer holidays, to boot – means that the window of opportunity to get more people in the saddle may already have closed.

Let’s hope that isn’t the case, although as previously pointed out, two potential stumbling blocks are the availability of parts due to global demand the industry is struggling to meet, and the cost of repairs in some cases far exceeding the value of the voucher – you’re not going to get a bike that needs new brake cables, tyres and a chain, for example, back on the road for anywhere near fifty quid, for example.

Head here to register for a voucher – please note that the registration page for the public will open some time after midnight this evening, according to the government, but at the time of writing the link directs to the trade registration page.