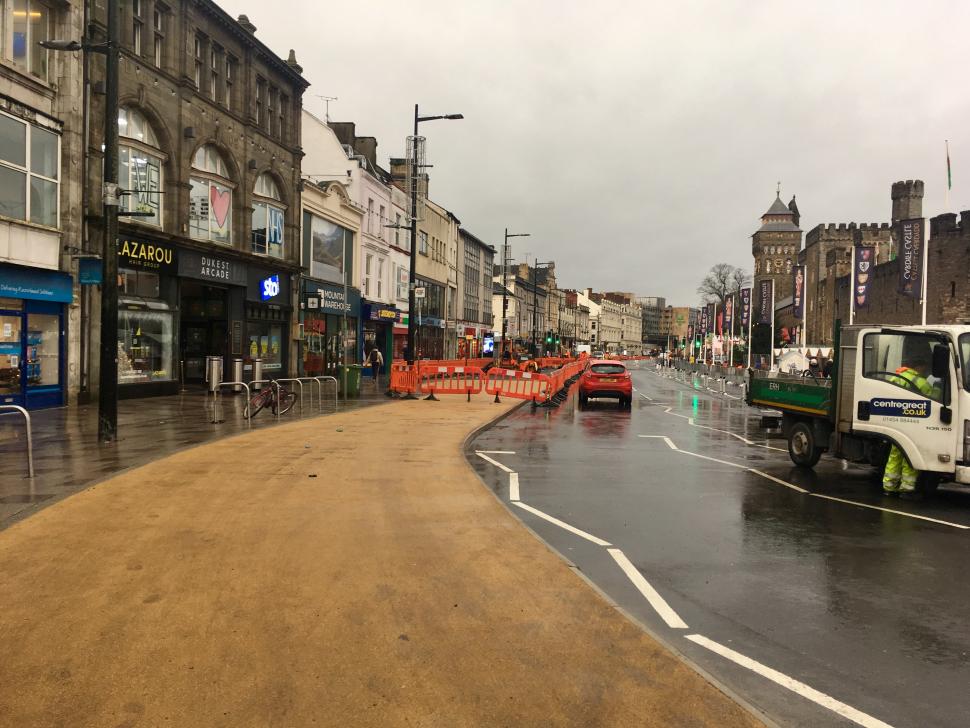 ‘Get off your bike and walk’: Female cyclist “petrified” after man grabs bike and refuses to let go

“There's no way he would have done that if I wasn’t a woman,” said climate activist Clare James, who was riding on a cycle lane at the time of the terrifying incident ...
by Ryan Mallon

A female cyclist was left “petrified” and “visibly shaking” after a man confronted her while she was riding on a cycle lane. The man, who appears to have attended a nearby concert, grabbed the woman’s bike and told her to ‘get off and walk’. After a steward at the event intervened to fend off the attacker, another man “aggressively” jumped into the bike lane in front of the cyclist.

To allow the crowds to exit the venue safely, Castle Street had been closed to traffic, though the cycle lane remained open.

49-year-old James, who works for campaign group Climate Cymru, was riding through the crowds “at a snail’s pace”, when a man grabbed her bike by the handlebars.

“I said: ‘What are you doing?’ and he said: ‘Get off your bike now and walk’,” she told WalesOnline.

The man, believed to be in his 20s, then told her that she shouldn’t be cycling on the road, to which James replied that she was cycling in an open bike lane.

“But he was really aggressive and within a very short space of time I was really feeling very intimidated,” James said.

The cyclist also noted that the attacker ignored other people riding bikes in the lane, who she says were mostly male delivery riders.

She continued: “People started to come over and people were saying: ‘Let her go’. I think because they could see that I was in quite a bad state they were saying: ‘Are you okay?’”

> Female cyclist held down and bike stolen during frightening attack

After failing to attract the attention of nearby police officers, eventually a steward working at the concert intervened and removed the man from the scene, allowing Clare to leave.

However, as she continued on the cycle lane, “shaking” after the encounter, another man – who was walking along the footpath – spotted her and “aggressively” and “determinedly” jumped in front of Clare. Fortunately, the traffic lights soon changed, which enabled the 49-year-old to flee.

Following the two back-to-back incidents, Clare says she was targeted because she “stood out as a woman on a bike”.

She said: “It was so obvious [the first man] was just going to pick on me because I was an easy target… there’s no way he would have done that if I wasn’t a woman.”

“There were two men, as far as I'm concerned last night, that really just wanted to be intimidating. They plucked me off, because I was on a bike and because I’m a woman.”

While Clare’s husband suggested closing streets to cyclists after concerts as a potential solution to the problem of harassment, she believes that “men’s attitudes towards women” were the root cause of the incidents, and that active travel to and from events should still be encouraged.

“I said [to my husband]: ‘No, no - maybe men shouldn't be like that’. That’s the issue. It doesn't matter whether you close the cycle lane, whether there’s drinking involved, whether there are crowds," she added.

While Clare says that she feels “reasonably safe” while cycling in Cardiff, and that the shocking incidents won’t prevent her from riding her bike, she says that Thursday’s night ordeal has caused her to reflect on her safety as a female cyclist.

“But I have to say that it's definitely made me far more aware that I'm not as safe on my bike as I think from people who are on foot, from pedestrians,” she concluded.

There have been a number of attacks on lone female cyclists in recent months, though unlike Thursday’s incidents these have mostly involved targeted robberies by violent moped gangs.

In April we reported that a woman was held down and had her bike stolen by two men in Surrey. The cyclist was sat on Beddlestead Lane, near Warlingham in Surrey, when she was approached by two men on a scooter.

Surrey Police say the incident, which happened between 1.40pm and 2.15pm, saw the victim held to the ground while the offenders made off with her bike down Clarks Lane.

In response, cycling clubs across south London had warned members to only ride in groups, and more recently former Scottish champion Jennifer George — who finished eleventh in last month’s British time trial championships — repeated the warning having been attacked herself on two separate occasions since April.