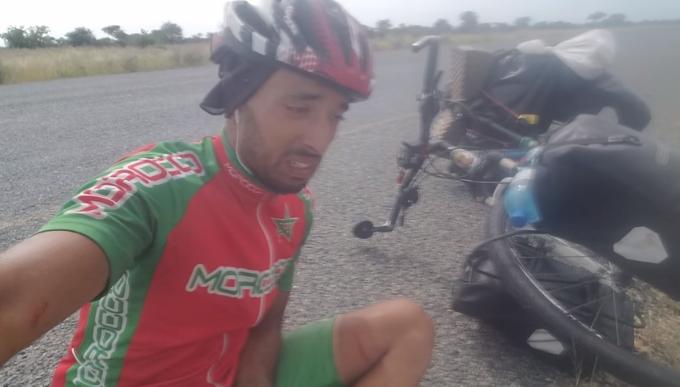 After Abdelhadi Cecradi's online friends saw his post-attack video, they contacted Moroccan embassy in South Africa for help...
by Simon_MacMichael

A cyclist from Morocco who was attacked by an elephant while riding in Zambia is recovering in hospital after Facebook users alerted the country’s embassy in South Africa to his plight.

Abdelhadi Cecradi, who has been cycling through Africa since July 2018, was attacked by the elephant on a road near Kazangulu, a town on the Zambesi where Zambia and Botswana meet ad which also borders Namibia and Zimbabwe.

According to Morocco World News, the 23-year-old tried to evade the charging elephant but found his escape route blocked by a truck.

He hit a tree, and sustained a double fracture of his left forearm.

Cecradi recorded a video at the roadside and posted it to Facebook in an appeal for help.

He said: “I’ve seen my arm break in two, and I’m unable to move it. There is no one around.”

Facebook users in Morocco who saw his video contacted the country’s embassy in South Africa to appeal for help.

Embassy staff, assisted by the Botswana authorities, managed to locate him and take him to hospital, although the situation was complicated by restrictions on border crossings due to the coronavirus pandemic.

He underwent successful surgery on Friday, with his medical expenses covered by Morocco’s Ministry of Foreign Affairs, African Cooperation, and Moroccans Living Abroad.

In a subsequent post to Facebook from hospital, Cercadi said: “I apologise to you, and to my family, I didn’t want to worry you with my problems … I had an operation yesterday at 2pm which was successful, thanks to God and to your prayers.”

Going by his initial video filmed immediately after the elephant attacked him, Cercadi is wearing cycling kit in Morocco’s national colours of red and green, and we have heard before of the animals becoming aggressive in similar circumstances.

When the charity Krizevac Project acquired decommissioned postal bikes from the Royal Mail and began sending them to Rwanda, some ended up being used by rangers on a game reserve.

Still painted in the Royal Mail’s signature red, the rangers sometimes found elephants charging at them. They repainted the bikes green, and such attacks ceased.

The charity had previously asked the Royal Mail if it could sell some of the bikes second-hand in the UK to help offset the cost of sending them to Africa, but were told they couldn’t, partly because there were concerns that some unscrupulous people might impersonate postal workers.

Inspired by the story of the rangers repainting the bikes, the charity went back to the Royal Mail and asked whether they might be permitted to sell bikes if they were repainted in colours other than red; the Royal Mail agreed, and the Elephant Bike was born.