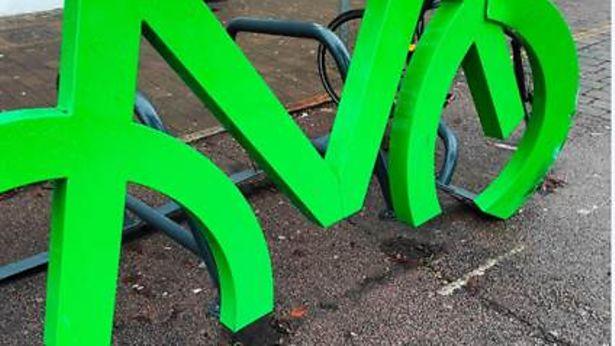 "Eyesore" cycle rack removed...but only because driver smashed into it

One of Stevenage's luminous green cycle-shaped bike racks was "damaged beyond repair" after a driver crashed into it...
by Dan Alexander

A cycle parking rack in Stevenage has been damaged beyond repair by a driver who collided with the luminous green bicycle-shaped structure. However, some locals say it is no bad thing as it was an "ugly eyesore".

The council broke the news the rack outside Tesco, one of three installed on Stevenage High Street last year, was no more after a motorist drove into it, leaving it unsafe to use. The driver did not stop at the scene and has not been identified. Cllr Lloyd Briscoe, executive member for transport said: “Over the Christmas period, the bike rack outside Tesco was hit by a car and had to be removed due to safety concerns.

"The design of the racks has proved to be a discussion point for many residents, with several sharing views on how often they are used, to how they are easy to spot.

"Before this incident happened, the council conducted a survey about the Old Town High Street and one particular question within that focused on these bike racks.

"We asked if we should keep them, move them, or replace them. We are in the process of reviewing these responses and will let everyone know what we plan to do in the not too distant future."

You may have noticed that the bike rack outside Tesco has been removed; the reason for this is because a car drove into it. The rack was damaged beyond repair – leaving it unsafe to use and therefore has been taken away. 🚲 pic.twitter.com/Laicur1W91

The bright bike rack was removed at a cost of £213 to Stevenage Borough Council, but not everyone was sad to see it go.

While some pointed out it was a well-used facility that should be replaced, others hoped any replacement would be more practical and less green.

Iain Kilmurray said: "Great to see the eyesore has been removed! Now install a suitable bike rack within the paved area. Stevenage has 40+ miles of cycle path separated from the highway, but parking bikes where vehicles are making manoeuvres a good idea?"

Eamonn Walsh added: "It’s not great if this costs the council but it was extremely ugly."

The racks, designed by Cyclehoop, have been spotted elsewhere too, by road.cc's Simon, for example, who spotted this group tucking into a cheeky Nandos on one just off Regent Street.