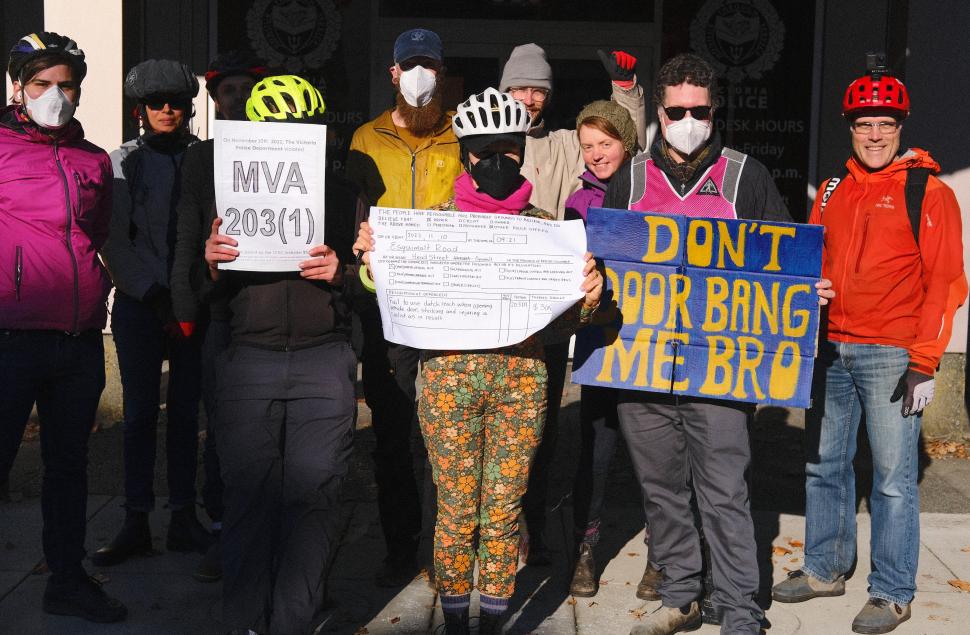 Cyclists ticket police in Victoria BC (via Free Beer on Twitter)

Police in Victoria, British Columbia are investigating incident that saw rider taken to hospital
by Simon_MacMichael

Cyclists in Victoria, British Columbia have issued a fake ‘ticket’ to the local police department after one of its officers doored a cyclist earlier this week, with an internal investigation meaning that the driver has not yet been fined.

The incident, which resulted in the cyclist being taken to hospital for treatment, happened at around 9.15am on Thursday morning.

Cyclist struck EB Esquimalt Rd at Head St a few minutes ago. Helped up to his feet, moving under his own power - albeit slowly. Officer in police cruiser opened driver door as cyclist passed. #yyj pic.twitter.com/5oOlnSLflP

In a statement, VicPD said that the officer, who was responding to a call on Esquimalt Road, “parked their vehicle and opened the driver’s side door into the path of a cyclist who collided with the door.

“The officer provided immediate medical aid and called for both BC Emergency Health Services paramedics and additional officers, including a supervisor, to attend. The cyclist suffered non-life-threatening injuries in the collision and was transported to hospital.”

Traffic officers from VicPD attended the scene of the incident and are continuing to investigate it, under the supervision of the department’s Professional Standards Section due to the involvement of an officer, and it has also been reported to the Office of the Police Complaint Commissioner.

In 2020, British Columbia’s provincial legislature increased the fine for dooring from $81 to $368, and urged motorists to watch out for cyclists before opening the door of their vehicles.

The internal police investigation, routine in all cases in which a member of the public is injured in an incident involving a police officer, means that no fine can be issued until that is concluded, and yesterday, cyclists rode to the local police headquarters to present a fake ‘ticket’ related to the dooring.

Good Crew today in Esquimalt and Victoria 🌞 We are asking Victoria Police to issue a ticket for MVA 203 (1) when their officer opened a door into a cyclist, injuring them. pic.twitter.com/eyaHQow4tw

Dear @vicpdcanada, you’ve been served. Do the right thing, ticket your officer who doored a cyclist. https://t.co/uSxHyU6NLh pic.twitter.com/MMlsVKbAuF

In Great Britain, the revisions to the Highway Code that took effect in January this year include drivers being advised to use the technique known as the ‘Dutch Reach’ to open the door with the hand furthest away from the handle, which causes the body to automatically rotate and thereby brings cyclists approaching from behind into their line of sight.

The offence opening a car door, or causing or permitting it to be opened, so as to cause injury, is punishable by a maximum fine of £1,000.

Cycling UK has campaigned for a number of years for an offence of causing death or serious injury by car-dooring to be introduced, intensifying its efforts after Leicester teacher Sam Boulting was killed in 2016 when a taxi passenger opened a door in his path outside the city’s railway station, throwing the cyclist into the path of a van.

The taxi passenger, Mandy Chapple, was fined £80 after admitting opening a car door, or causing or permitting it to be opened, so as to cause injury, while private hire driver Farook Yusuf Bhikhu was fined £300 plus costs for the same offence.

The van driver, Nigel Ingram, received a suspended prison sentence after admitting failure to stop and driving while over the legal limit for alcohol.