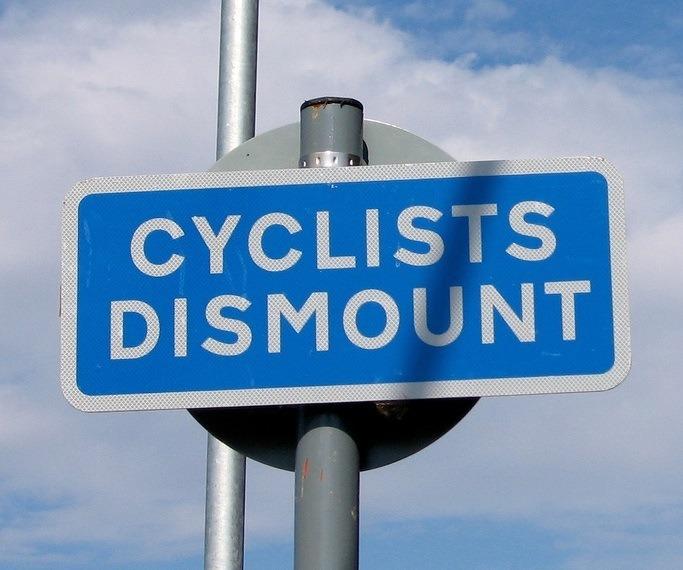 Signs put up in Coalville, Leicestershire, are advisory only – and are not required under new road rules
by Simon_MacMichael

Signs put up at a shopping centre in Leicestershire telling cyclists to dismount were erected on the instruction of the county council due to new Highway Code rules setting out a Hierarchy of Road Users according to the site’s owner – even though the signs are purely advisory and the rule concerned says only that cyclists should give way to pedestrians and does not require them to get off their bikes.

The Leicester Mercury reports that the signs have been erected on a 25-metre section of National Cycle Route 52 outside the Belvoir Shopping Centre in Coalville.

Local cyclist Andrew Bucknall told the newspaper, whose article has pictures of the signs, that it was “crazy” that the signs had been put up and expressed doubt that riders would dismount at the location.

He said: “There are many miles of shared cycle and walkways around Coalville, I can’t believe that on this very short stretch cyclists are being told to dismount on what was originally a shared path.

“Are people not trusted to share the space? The route is used by children getting to and from school and to the Snibston play area and is part of the National Cycle Network.

“[Cyclists] will use their common sense if someone is walking across from the car park and slow down or stop to let them by,” he said. “We use common sense now when we’re sharing the path. We don’t need this sign.

“It is just absurd. Who on Earth will follow this sign? Can I not be trusted to act sensibly on my bike for just a few metres? It’s like I don’t matter, as if I’m a second-class citizen now.”

Private property investment unit trust Gylo, which bought the shopping centre in 2019, said that the local council had stipulated that the signs be put in place due to the Hierarchy of Road Users that has been introduced in the latest edition of the Highway Code, published this weekend.

A spokesman for the company said: “The signs advising cyclists to dismount at the new entrance to the shopping centre were a requirement of Leicestershire County Council,” said a spokesman.

“The agreement for provision of the new entrance was made conditional on the installation of the signs. One of the new factors at play here which was no doubt part of the County Council’s thinking are the very latest changes to the Highway Code.”

“A significant change is made in new Rule H2 which requires cyclists to give way to pedestrians who are seeking to walk over a crossing.”

New Rule H1 of the Highway Code, which introduces the concept of the Hierarchy of Road Users, says: “Cyclists, horse riders and drivers of horse drawn vehicles likewise have a responsibility to reduce danger to pedestrians.”

There is no requirement for cyclists to dismount, and as explained in this article on the Cycling UK website, unlike a sign displaying a bicycle within a red circle which would legally require cyclists to get off their bikes (ie ‘No cycling)’, other signs – including the ones at this location showing ‘Cyclists dismount’ in white lettering against a blue background – are advisory only and do not need to be complied with.

Mr Bucknall added: “With walking and cycling becoming a more accessible form of transport for people for health, well-being, environmental and financial reasons there should be more positive messages around signage to encourage it.

“I appreciate there is a new entrance to the shopping centre but maybe a ‘Caution Pedestrians Crossing’ would be a better sign.”

“I’m sure whoever put the signs up means well, but people need to be trusted. It was a shared path before and should surely continue as one now.”