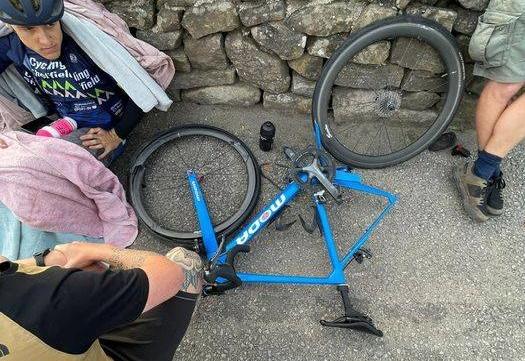 The rider's cracked carbon frame and front wheel were pictured at the roadside...
by Dan Alexander

Derbyshire Police are searching for the rider of an illegal quad bike who hit a cyclist, smashing his Moda bicycle in a collision in the Peak District last month.

An image shared by the county's Rural Crime Team shows a "young chap" sat on the roadside next to his bike — which appears to be a carbon Moda Vivo rim brake model — the front wheel badly damaged and chainstay snapped.

The incident happened on the afternoon of Wednesday 21 September near the village of Grindleford, around 10 miles south west of Sheffield, in the Peak District and saw the lone rider struck by a driver with their face covered riding a "road-illegal" quad bike with a female passenger.

> Snake Pass section shuts to all road users... but cyclists can still reach the summit (and turn back around)

The driver was wearing a blue jumper, tracksuit bottoms and had covered his face with a black balaclava, while the female passenger, clearly visible behind, wore a checked shirt. In an appeal on Facebook, the Derbyshire Rural Crime Team said anyone with information should quote incident number 749 of 21/9/22 when contacting them.

"Although this has been doing the social media rounds for a few days we thought we'd join in to reach as many people as possible," the post read.

"The young chap with the smashed up bicycle ended up as he did after being hit by the pair on the road-illegal quad machine during the late afternoon of the 21st (Wed). It happened up above Grindleford/ Fox House area so please contact us if you have any information helping to identify them."

Since the incident happened close to the county border South Yorkshire Police also shared the appeal and can be contacted by calling 101 and quoting the incident number above.